Documentation and description of Yil, a Torricelli language of Papua New Guinea 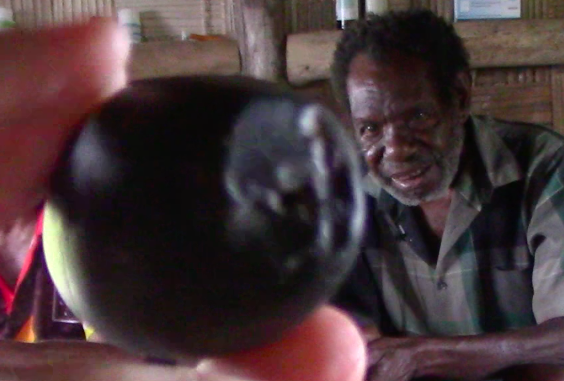 Deposit page image for the collection ‘Documentation and description of Yil, a Torricelli language of Papua New Guinea’. Click on image to access collection.

This collection is the result of field research documenting and describing the Yil language. This project will result in the first major documentation and a book-length description of the Yil language. The project is being conducted as part of doctoral research by Pegi Bakula at the University Buffalo.

The Yil language is spoken by approximately one thousand people in 19 villages and hamlets in the Yangkok Rural LLG of Sandaun Province, Papua New Guinea. Yil is, for the most part, an undescribed and undocumented moribund language of the Wapei sub-group of the Torricelli language family.

Prior to this project, primary materials for the Yil language were limited to two sources:
– Handwritten field notes, but no recordings, by Donald Laycock (available through PARADISEC doi: 10.4225/72/56E824B347D2D)
– A brief phonological sketch by Martens and Tuominen (available through SIL at https://www.sil.org/resources/archives/23639).

This project is the first effort at documenting and describing Yil since the 1970s. In its current state, the deposit contains materials recorded in 2019 by Pegi Bakula. The project is a collaborative effort between the researcher and community members. The collection currently includes audio and video recordings of naturalistic and elicited Yil-language speech events. Annotations (transcriptions and translations into English) have been completed for approximately half the duration of elicited materials recorded. Also recorded, in Tok Pisin, at the community’s request and included in this deposit are local events.

Discussions with local secular and religious leaders in 2019 suggested the collective population of those 19 villages and hamlets at the time to number approximately 2000 individuals. When it comes to variation, speakers claim Yil has somewhere between three and nine “dialects” (their term). The community is proud of the variation within their language and considers it an important feature. On the transmission front, children no longer acquire Yil as a first language and the younger generation of parents claim only to be able to understand but not speak it. As such, the Yil-speaking population of community is perhaps only half the population at best. Children born into the community since approximately independence from Australia acquire(d) Tok Pisin as their first language, rather than Yil. Additionally, national education policy mandates the language of education to be English-only from grade three and up. Yil speakers lament the use of Tok Pisin by children which they describe as the reason transmission of Yil cross-generationally has ended, and also that it “ruins their English” when they go to school. Per EGIDS vitality descriptions, a realistic accounting would place Yil as quickly becoming moribund (8a).

With such an endangerment status, any Yil language recordings are valuable. In 2019, recordings were made of Yil-speaking individuals, both male and female, spanning at least half of the villages and hamlets. These individuals were recorded during naturalistic speech events (e.g., conversations, recounting life events, etc.) as well as non-naturalistic elicitation sessions.

A point of pride held by community members regarding Yil is the extensive amount of variation. In fact, the first introduction researcher Pegi Bakula was given about the Yil language upon her arrival to the community was the fact that there are many “dialects” (their word). By community reckoning, Yil is a continuum of some 3 to 9 “dialects,” though these ‘dialects’ are not actually defined much less readily explained. Variation in Yil is expressly not village/hamlet-specific, so community members themselves are curious as to the number and nature of varieties.

What makes this collection special is that Yil speakers representing a broad cross-section of the community actively sought to participate in the project. A small number of Yil speakers were only interested in providing examples of naturalistic language use, such as a song or recounting a life event. Many participants wished to record elicitation sessions in addition to the naturalistic speech events and many others committed to elicitations alone. The significant interest in word list elicitation is noteworthy as Yil speakers suggest their ‘dialects’ are quite apparent when comparing across the participants.

While the intention of the project is not to generate a pan-dialectal description, knowing that variation exists is important. And as children are no longer acquiring Yil as their first language, recording spoken examples of as much of the variation as possible is even more important.

The current version of the collection is comprised of 68 sessions. The deposit contains 23 hours and 51 minutes of recordings with Yil speakers of which 10 hours and 48 minutes have time-aligned transcription and translation into English. The recordings included in these duration figures include a number of genres where the Yil language was used or expected to be used.

Not included in the above durations are interviews and community events where the Yil language was not used as well as ‘silent movies’ created as stimuli for future use. A number of sessions include interviews where speakers provided personal background information totaling 2 hours and 16 minutes. Three sessions of community events during which Tok Pisin was used were recorded. These sessions contain 2 hours and 1 minute of audio and video material. Stimuli sessions of culturally salient activities were recorded without the use of any language. These video-only sessions contain 34 minutes of recording.

The collection also contains backups of video recordings. These recordings are excluded from all recording durations given above.

The collection includes 28 sessions of naturalistic language use recorded in songs, life stories, conversations, and more. While none of these are yet transcribed or translated into English, 17 sessions have time-aligned annotations ready to be filled in during Pegi Bakula’s next visit to the community.

While Yil speakers came from many villages to tell stories or sing songs or have a yarn, a significant number wanted to participate in the word list elicitations specifically. The “Special Characteristics” section explains the reasons why.

The Yil language documentation and description project is being carried out as part of doctoral research by Pegi Bakula. The project began in 2019 with an exploratory visit to Papua New Guinea through a National Science Foundation grant extension of which Dr. Matthew Dryer is the principal investigator.

The audio and video recordings in this collection were made during Pegi’s exploratory trip to the Yil-speaking area in June and July 2019. The Apet family was instrumental to the success of this exploratory visit. They made the following project-specific arrangements, among much other assistance and support:
– disseminated Pegi’s wish to document and describe their language to the entire Yil-speaking region as well as describing the process,
– organized for and helped obtain culturally-appropriate informed consent which Pegi needs to do this work,
– advised Pegi of appropriate compensation to participants of recording sessions, and
– regulated the pace of visitors so both Pegi and her equipment had sufficient time to recharge.

Annotation of data using ELAN began in July 2019 after Pegi left the community and is currently ongoing. Nick Athari assisted with ELAN-related work from February to June 2021.

The Yil language lacks a literary tradition and as such there is no standard orthography. A number of Yil community members have taken to writing their language in their own way. No attempt has been made to compare written examples of Yil text produced by various individuals nor to see if there is mutual intelligibility between different individuals’ writings.

Currently in this collection, the extent of transcription of spoken Yil into a written form is limited to several sessions of word list elicitations. The orthographic convention used in these annotations is one of a broad phonetic transcription generally in IPA. A phonological transcription and a ‘standard’ orthography are yet to be established.

Users of any part of this collection should acknowledge Pegi Bakula as the data collector and researcher and the National Science Foundation as funder of the project. In addition, users should also acknowledge by name any others involved in the project. The relevant contributors to be named are listed in the metadata of the session being used. These individuals include those whose words and/or images appear in any given session or those involved in the process of data collection, transcription, translation, or in any other way.