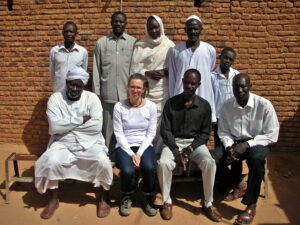 The deposit is a result of the effort to make the Julut language data of the PhD project accessible to more than just the author and the speech community. The research solely on Julut began with the PhD project in summer 2013 and has been completed for the moment when the dissertation was published in December 2020. The deposited data will encompass recorded stories and songs, a 600 noun lexicon, the Toolbox data, written-down stories, annotated stories and images of the two editions of the Julut Alphabet book. The collected material covers various genres, such as folktales, procedures, history and cultural practices.

The region of the Nuba Mountains is characterised by an extreme linguistic diversity. Very little is known about the languages, their genetic affiliations and their contact histories. The documentary data in this collection will contribute to a better understanding of Nuba Mountain languages, including their typological, genetic and areal character.

The language of this deposit is Julut which is spoken by about 6.000 people (see the Tabaq documentation project) in a rather isolated area of the North Western Nuba Mountains of the Sudan. The Julut region is located about 40 km south of the town Dilling and about 80 km north of the town Kadugli. Together with Tima and Katla, it forms the Katlaic language group. Julut is the only language of these three which is hitherto almost undescribed. Hellwig’s (see the Tabaq documentation project) research shows that Katla and Julut form a dialect continuum with the dialects at the extreme ends of the continuum not being mutually intelligible. The Julut language data presented here comes predominantly from the eastern, extreme end.

Julut is severely endangered because Arabicisation and Islamicisation by the government, 20 years of civil war and economic pressure has led to the heavy displacement of people to larger towns outside the Nuba Mountains.

Due to the still lasting civil war in the Nuba Mountains in 2014, the data of this deposit was collected in the Julut community of Khartoum but contains also smaller contributions of speakers from Dindir and the Nuba Mountains. The Julut community of Khartoum lives predominantly in Haj Yusif, a district on the eastern periphery of the capital of the Sudan. Many thanks go to Baba ElHusan, the main facilitator, contributor and translator, who also helped the author to get in touch with the different participants of the documentation project.

This deposit is a result of the effort to make the language data of the PhD project accessible to more than just the author and the speech community. The stories and songs are deposited as audio files. A picture of the respective speaker is attached to the story sessions. The Toolbox data is archived as txt file. Two written down stories and three analysed, annotated and transcribed texts and a 600-noun list which are part of the dissertation are archived as pdf files. The two editions of the Julut Alphabet book are deposited as image files. Also two image files of the region’s map are stored in the archive.

The project prioritised rich metadata documentation, including thorough documentation of the situation, the contributors, current events, and the documentation work. The author’s corpus includes approximately ten hours of audio recordings, of which 48 are stories, 27 are songs, about 100 are elicited sentences, some are word lists, and one is a questionnaire. I used toolbox to compile a lexicon of 780 nouns and 200 verbs, 600 elicited sentences, the questionnaire, and 18 transcribed and analysed stories that correspond to about 560 analysed sentences. The project also resulted in copious fieldnotes and written questionnaires which can be digitalised. Since the documentation and description of the Julut language was started as a PhD project, the goal now is to archive as much data of the corpus in ELAR as possible. The archiving process has been started in May 2022.

The research solely on Julut was started with the PhD project by the author in summer 2013. The project has been completed for the moment when the dissertation was published in December 2020, but is not finished as such. Roughly ten months fieldwork was carried out between 2014 and 2018, comprising five trips to Khartoum. Twenty-eight language consultants participated in the project, including six women. The author only collected audio recordings and processed the data with Toolbox. The dissertation “A grammar of Kordofanian Julut, with particular consideration of the verbal morphology” with a 600 noun list and three transcribed and analysed stories was published by Rüdiger Köppe Verlag, Cologne (ISBN 978-3-89645-771-4).

The ban on indigenous languages in Sudan until 2005 as well as political conflicts, the dominance of Arabic, and the changing economic conditions have threatened minority languages like Julut for generations. In the cities as in the Nuba Mountains, the Julut language is hardly passed on to children, and adults speak predominantly Arabic amongst themselves. Thus, Julut is a highly threatened language.

The Julut community in Khartoum has a language committee which developed an orthography in 2005 with the help of T. Stirtz, a linguist with SIL International. This orthography was the basis of two editions of an Alphabet book. The most recent one was released in 2015. The present author worked with this material and adopted the orthography to raise awareness of the language in the community.

The analysis of morphem-break units follows the convention by Lehmann 2004, “Interlinear morphemic glossing”.

Users of any part of this collection should cite it according to the ELAR format. It is appreciated by the author if the user could send a message to Ulrike Nüsslein about its interest in the collection.

My sincere thanks go to the Julut community in Khartoum, who always welcomed me very warmly and it was a pleasure to be with them, even if it was not about the Julut language. In particular, I thank Awad Baba ElHusan, who was my main teacher of Julut and organiser of meetings, language sessions and the like. He introduced me to the community and helped me to find my way in the society of Sudan. I would also like to express my gratitude to Mokhtar Zakaria, Azain Darjawat, Fatima (Margret) Abuna, Jubara Sultan, Babu Ali Nawai, Omar Idris, Khojaly Suleiman, Babur Shasha, Fatur Darjul, Abdul Bagi Bulkamin, Mansur Ismail, Aibet Ali Tako, Adam Kabashi, Saodi Mohamad, Shadia Ramadan, Majdub Ali Nana (Majtong) and Sukar, who have all contributed a lot to the data collecting and made me every stay an unforgettable time.
The Rosa-Luxemburg-Stiftung funded the project from 2014 to 2017.