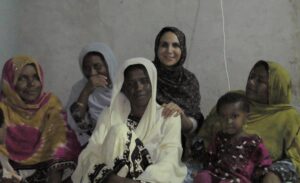 The collection is an outcome of an ongoing project documenting oral tradition practices, predominantly among Afro-Baloch communities along the Southern Coast of Sistan and Balochistan Province in the Islamic Republic of Iran. The project is a collaborative effort between myself and a group of Afro-Baloch and Balochi community members who are involved in designing the collection content as well as in collecting and recording data. The deposited data consists of various folk genres, such as ‘mamabies’ (songs for mothers-to-be and mothers who have recently given birth), lullabies, wedding songs, daily working songs, fishing songs, mourning songs, healing songs and natural interactions between main singer and her/his group. The data has been recorded in video and audio-only formats.

The group presented here is the Afro-Baloch of south-eastern, Iran. In contrast to others of African origin such as African-Indians or African-Americans, they are not aware of their origin. They consider themselves Baloch; however, Balochis do not consider them Baloch. The Afro-Baloch people speak the Balochi of the region where they live, but they maintain unique traditions, such as their healing customs, which have spread to other social groups in Balochi society.
I wish to thank all the Afro-Baloch and Baloch people in these villages for accepting and hosting me, in particular the families of Mr. Abdol Naser Pasand, Mohammad Salim Pasand, Mohammad Samadi, Mostafa Tarbar and Idok Meskotiyan.

In the current version of the collection, the corpus consists of approximately one hour of recorded natural songs for mothers-to-be and mothers who have recently given birth, as well as a few lullabies (in video).

Users of any part of this collection should acknowledge Maryam Nourzaei as the main investigator, and Abdol Naser Pasand as a core member of the research team. The main singers who have shared their songs should also be acknowledged by name. The relevant information is available in the metadata.