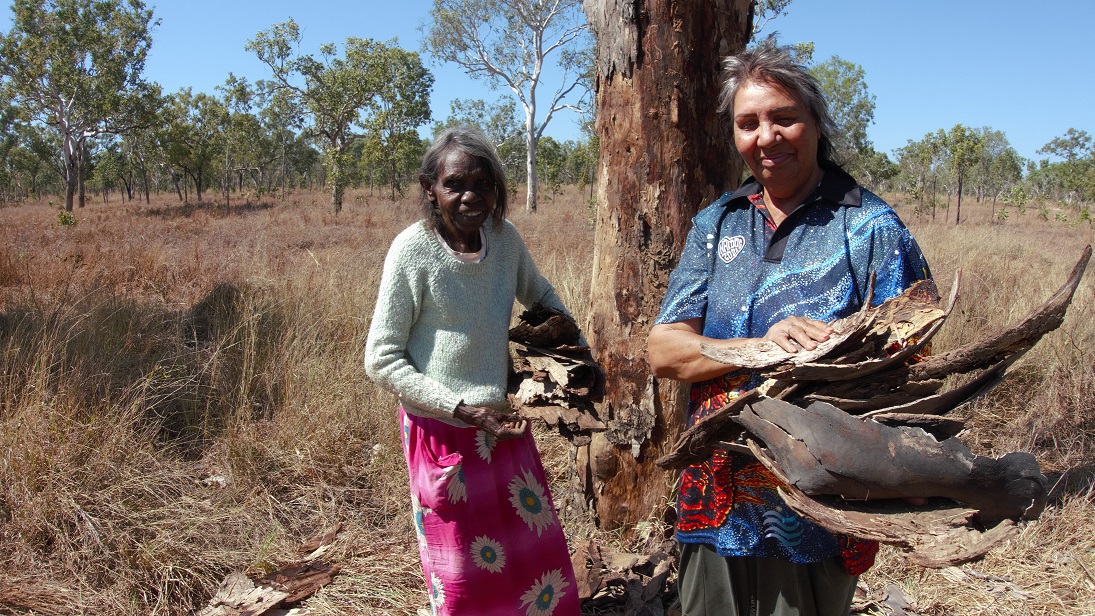 Wardaman country lies southwest of the town of Katherine in the Northern Territory of Australia. Katherine is about 330 kms. south of Darwin, and Wardaman country begins about 80 kms. further south, around Scott and Mathison Creeks (see Map). Wardaman country is bordered to the east by Yangman country (of which a central map location is the town of Mataranka), and to the northeast by country that was traditionally Dagoman, extending into Katherine and north of the town. Wardaman were also in touch with speakers of Jaminjung and other Daly River languages (See map).

Wardaman, Yangman and Dagoman were closely related languages. Today there are no first language speakers of the latter two, and only two first language speakers of Wardaman, Bill Harney and his sister Sally. They are at the core of this project. So are the many Wardaman descendants of the region who have some understanding and knowledge of Wardaman, and want to preserve their language and teach their children.

European settlement of the Wardaman area and the entire Victoria River region was violent. From the late 1870s and early 1880s, lands throughout this area were seized and occupied for the operation of cattle stations. Naturally, that spelled conflict – over waters, the presence of large numbers of animals that were radically changing the landscape and the movements of Aboriginal people, and the deadly violence meted out to the Indigenous people by pastoralists (Lewis 2012).

Pastoral development involved direct assaults on Wardaman people and their neighbours, with whom they lived in close association and intermarriage. Some of these stories of the region, told by Wardaman and other seniors, have been documented (Rose 1991, Merlan 1994, Lewis 2012).

Springvale Station was established in 1879 very close to what began to develop as the telegraph station and township of Katherine. Springvale homestead area was known as Wumerrelyang, according to Dagoman and Wardaman seniors of the last few decades.

From Springvale, pastoralist Alfred Giles pushed south into Wardaman country, putting both sheep and cattle onto the country. (Sheep died off quickly; conditions were unsuitable for them).

There were several decades of violent frontier conflict. Aboriginal people’s resistance and attempts to oust the intruders only brought even fiercer pastoralist response.

Stories of the wild times of pastoral occupation continued to be part of the life experience of older Wardaman people, including those of the age of Bill Harney, who (it is believed) was born in 1931, or in the early 1930s. Bill evaded capture by welfare officers who by then were seeking to institutionalize children of part-European descent, and became himself an expert station worker and cattleman. (Harney 1999 with J. Wositzsky, Born Under the Paperbark).

Sally, his sister, grew up largely at Willeroo Station (about 120 kms. south of Katherine). There she lived in the ‘camp’ with relatives, and from an early age was put to various tasks around the homestead and, later, at Manbulloo Station.

Willeroo, Delamere and (from 1919) Manbulloo Stations were among the major locations that Wardaman people came in to. They worked on these stations into the late 1960s, when the establishment of an ‘Award’ (or minimum) pastoral wage caused pastoralists to want them gone.

As pastoral occupation of the countryside became more firmly established, but the conditions of employment ‘modernized’ in the direction of equal pay (which had been a strong union demand), Indigenous people moved, and were moved, into fewer locations. Wardaman were shifted in numbers to Manbulloo, about 10 kilometres from town of Katherine.

During World War II, Army camps were established around Katherine, and some Wardaman lived in them – as did other Aborigines too, since all Indigenous people were brought into ‘compounds’ until the War ended. Gradually, in the mid- to later twentieth century, more Wardaman began to live in and around parts of Katherine town itself, especially in fringe camps established to the south and west of the town, on the Katherine River. Today, most Wardaman people live in the town of Katherine, and at Menngen (Innesavle) Station about 160 kms. from Katherine which Bill Harney has developed as a home and living area.

Wardaman was actively spoken until fairly recently among Wardaman people and their close associates. Into recent times Wardaman were multilingual, many speaking their own language, and combinations of Yangman, Dagoman, Jaminjung and other languages (e.g., Mudbura) depending on marriages and other regular contacts.

Now knowledge of Wardaman language in the town of Katherine is slight, although there are several people, close relatives of seniors who were active speakers, who retain some active knowledge. Some younger Wardaman descendants maintain some passive knowledge of the language and use some words or phrases in their speech. Wardaman people also have some understanding of vocabularies, mainly, of other languages, but the principal language of communication for descendants has become Kriol (a creolized English).

Wardaman is closely related to the neighbouring varieties of Yangman and Dagoman. There degree of mutual intelligibility is high enough for it to be possible to consider these dialects of the same language. The present project will be able to examine the extent of cognacy of basic vocabulary, and major grammatical forms, between Wardaman and Yangman, based on Yangman field study conducted earlier by Merlan with the last first-language speaker, and some second language speakers, at Elsey Station.

Wardaman has an inventory of five vowels: i, e, a, o and u. There are 17 consonants, organised and written as follows:

Pronunciation is assisted by understanding that there is no voiced/voiceless contrast (i.e., of the type that distinguishes ‘big’ and ‘pig’ in English). All stops tend towards a voiced quality in initial position, and towards a voiceless quality finally.

The morphophonemics of the language are fairly straightforward. E.g., at the boundary between initial -rr final pronominal prefixes, and before a stop-initial verb stem, rr > d:
/ya-wurr-janga-n/  [yawudjangan]. There are other, similar processes and morphophonemic alternations between stops and semivowels, none of which drastically alter the shapes of forms.

The major word classes in Wardaman are: nominals, coverbs and verbs. Coverbs are non-inflecting predicative lexemes which constitute an open class. They are ‘co-‘ because they cooccur with inflecting verbs which carry the markers of person, tense, aspect and mood to form verbal meanings, e.g. duba jingi- ‘sit, sit down’. In this kind of combination, a coverb such as duba contributes a specific semantic – here one of being seated, sitting down – whereas jingi- is a much more general and all-purpose inflecting verb, the meaning of which can be as general as ‘be, be in a place’ and, sometimes, in context, ‘sit’.

A great deal of semantic specificity is achieved in Wardaman, as in some neighbouring languages, through the deployment of coverbs.

Characteristics of some of the other languages of the area, there is a fairly limited number of ‘true’ verbs in Wardaman. By this is meant verbs that inflect completely for person, tense, aspect and mood, and also by themselves carry a full semantic meaning. Examples are bewe- ‘tread’ (on), linyje- ‘cut’, and others.

More common than such ‘full’ verbs are ones that are evidently composed (at least diachronically) of a final CV- verb root preceded by what one may call an ‘attached’ co-verb, e.g. lid+bu- ‘to sew’, bany+bu- ‘collect honey’, loj+bu- ‘sneak up on’, and many others. These final CV roots are among verbs commonly found across many regional languages; they also serve independently as inflectable verbs in Wardaman, typically with a broad meaning that can also be made more precise in collocations with (non-attached, but preceding) coverbs. E.g., the CV root by itself serves as a verb common verb meaning ‘hit, kill, strike’.

The most common verbal construction in Wardaman, as mentioned above, consists of a coverb plus inflecting verb, which may in this context be called an ‘auxiliary’ (AUX). The principal semantics of such collocations is borne by the coverb; the general meaning of the auxiliary is compatible with that meaning and contributes a general meaning and transitivity feature. That is, coverbs co-occuring with -bu tend to involve action upon, and occur in transitive clause structures (e.g. lordba bu- ‘hit back, strike back’, lorrblorrb bu- ‘hit in the ribs’, mambang bu- ‘chase, pursue’, and many more.

Harney, Bill with J. Wositzky 1999. Born Under the Paperbark: A Man’s Life, From the Land of the Lightning Brothers. ABC Books: Australian Broadcasting Corporation.

Merlan, Francesca (1994). A Grammar of Wardaman: A Language of the Northern Territory of Australia. Mouton de Gruyter.

Merlan, Francesca 1994. A Grammar of Wardaman: A Language of the Northern Territory of Australia. Mouton de Gruyter.

Acknowledgement and citation
To refer to any data from the collection, please cite as follows: