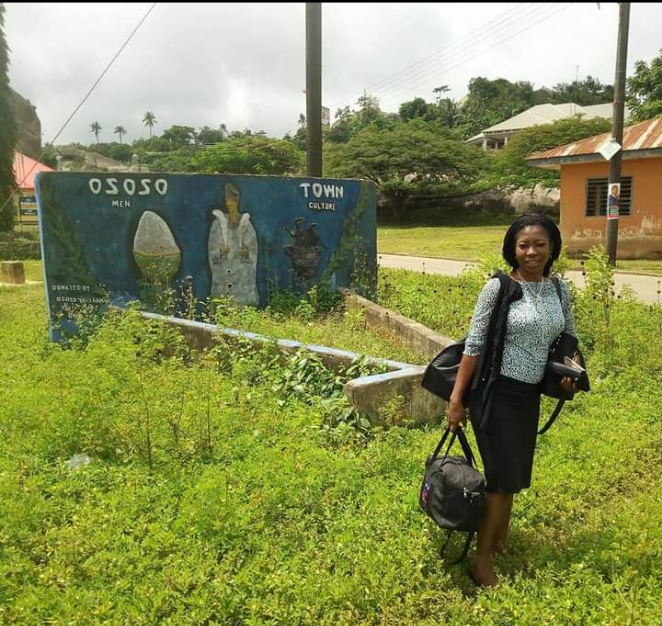 This deposit results from the interest of the principal investigator in the preservation of the ovbiko female initiation rite observed to be fading away fast among the people. With funding provided by ELDP, preservation has now been made possible.

English: The group represented in this deposit are the Ósósọ̀ people and they belong to the group Thomas (1910:1) described as “the Edo-speaking people”. There is an agreement on their historical origins with the oral account of Benin ancestry evidenced by the narratives of the aged consultants in particular and most indigenes. According to them, the Ósósọ̀ people, led by a hunter named Ọshiosọ, migrated from Ogbe quarters in the present Benin Kingdom around the 17th century due to the high handedness of the monarch. They had their first stop-over at Órùgbè but had to leave again due to attacks from marauders. When they got to Ósùnọ̀, still considered as their ancestral home till date, they stopped for awhile, but moved again out of fear until finally, they got to their present settlement on a hilly location surrounded by rocky enclaves, safe from marauders. Ósósọ̀ is between 1,200 to 1,400 feet above sea level, on longitude 60 to the East and latitude 70 to the North. The people, the town and the language are referred to by the same name “Ósósọ̀”. This documentation project was carried out in their community.

English: This deposit results from the interest of the principal investigator in the preservation of the ovbiko female initiation rite. As the only rite of passage from girlhood to womanhood in the community, it was observed to be fading away fast, loosing its prideful place among the people of Ososo. The PI, Agnes Legbeti, got initiated in the early 1980s and recalled that practically all maidens in the community had an understanding of the rite and looked forward to being initiated as it bestowed pride on the family and brought suitors for the maiden without one and for those who had suitor, it was a pre-marriage ceremony where he shows love by bringing gifts and making merry at her place accompanied by his friends.

When she came back to collect data towards her Ph.D. research into the language’s tone system and its grammar in 2017, one particular eloquent narrative she got was about the ovbiko tradition. To her surprise, most of the indigenes who helped double check her transcription and translation, could not remember most of the details chronicled by the elderly woman in the recording. That recording aided by the grant received from ELDP has made this deposit of audio-virtual recordings taken in naturalistic setting possible and collections available in an open source repository. The only cultural tradition that concerns transition from girlhood to womanhood has now been preserved for further purposes, especially academic. Apart from audio visual recordings, some sessions containing pictures illustrating the items used for the ovbiko rites have been included.
For the language documentation, attention also focused on obtaining relatively natural discourse. Included in the session are paradigm elicitations and focus group discussion with elderly women, with youths and council members on other rites, procedurals and historical narratives as well as stories have been included in the collection. Others are vocabulary elicitation using the Ibadan 400 Wordlist and the West Africa Language Data Sheet.

Naija (pidgin): Special tings wey interest pesin for di work:
Dis work come from inside di interest wey di main investigator put on top di preservation of dis ovbiko female initiation rite, as e be say na di only rite of passage every girl dey do when dem wan welcome am to womanhood for di community be dat, yet some piple don dey want make e end. Agnes Legbeti do her own initiated dat kain 1980 time and she remember say dat time na ting of joy wey pesin and im family dey do yanga put sef sey im do ovbiko. if she neva get who she wan marry, men go begin come round bekos now she no be girl again and if she don get who wan marry her, di man go dey come check her, giv her gift and make smal smal party for her wit him friends dem.

English: The session to be treated as an introduction to the corpus of this project includes a session which provides brief introduction to the maiden initiation rite, still faithfully observed by the indigenes and naturalistic language use documentation showing an everyday conversation and a folklore that is part of the oral tradition of the people.

English: This documentation project was finance by an ELDP Small grant (SG713) awarded to Agnes T. Legbeti for the period of September 2022 to September 2023. Along with Emmanuel Olaku and Mary Taiwo, her two research assistants, they arrived the community for their first 1month pilot study in September 2022 carrying very sophisticated audiovisual equipment. Although it was said to be a wrong time for intitiation in the community, the team got lucky to find a maiden was going to be initiated the following week. Securing her consent and her family’s consent, video recording of her rite was documented. Others who had and who will undergo initiation were also documented. The community records large number of intiation during December when parents in diaspora bring their daughters home as the rite is done only in the village. Needless to say the second period of documentation begins in December to January.

English: This project provides access to women’s language use, which tends to be generally under-documented compared to men’s language use. As a transition stage rite from girlhood to womanhood, nudity is involved in this project, however, young girls, either naked partially or totally in several parts of the documentation, have been professional blurred in line with participants choice, universal ethics on nudity and ELAR’s advice. Some parts of the recording will be placed on ”user access’’ only to ensure data is used for purely academic purposes.

English: Users of any part of this collection should acknowledge Agnes Legbeti as the Principal Investigator (PI) and Emmanuel Olaku and Taiwo Mary Folake as research assistants. They should also acknowledge The Endangered Language Documentation Programme as the funder of the project. Use of any part of the corpus must acknowledge by name the individuals appeasing in the part. Any other contributor involved in the data collection, transcription and translation or who contributed in any way to the session used should be acknowledged by name . All relevant metadata needed towards this acknowledgement are available in the metadata.