Ethnographic documentation of an Annual Buddhist Festival in the Khengkha speaking Community of Korphu in Trongsa, Bhutan 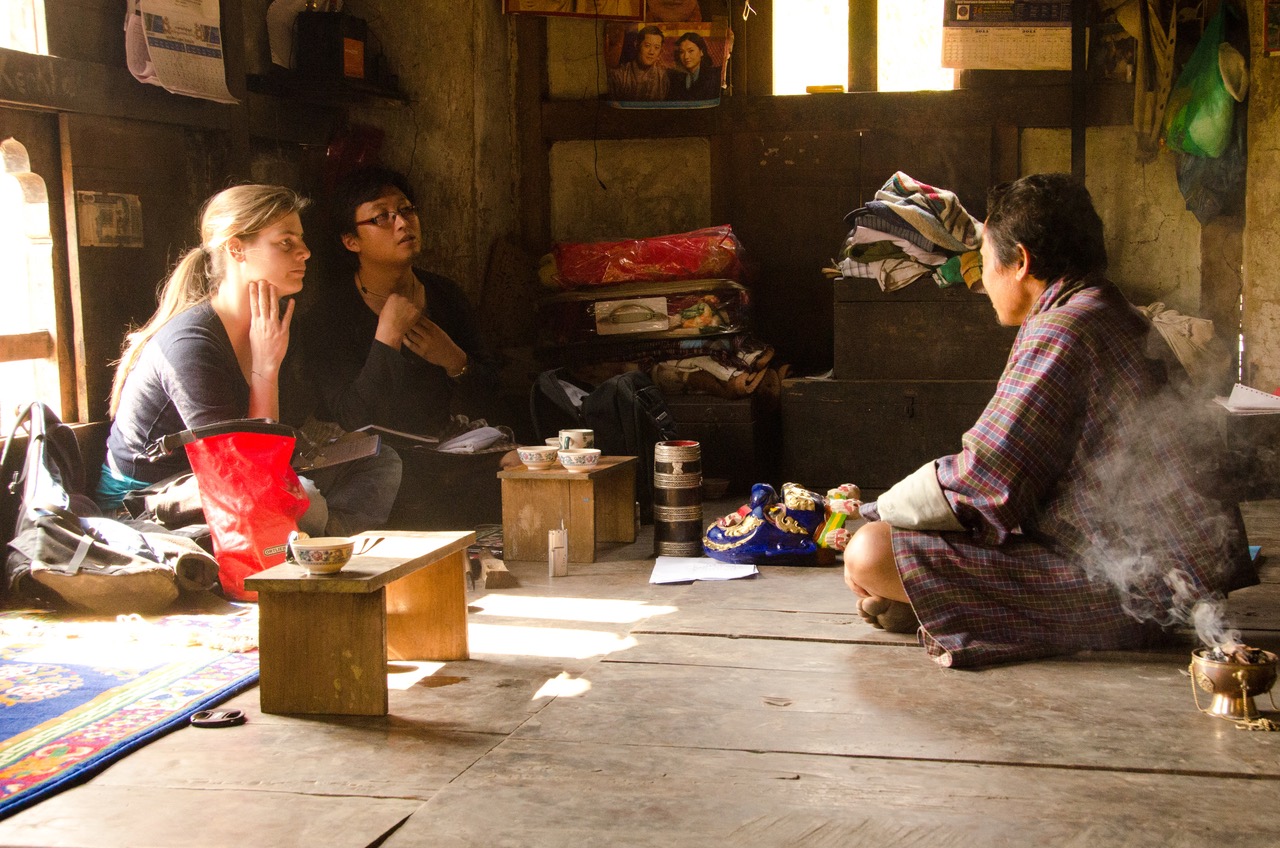 Landing page image for the collection ‘Ethnographic documentation of an Annual Buddhist Festival in the Khengkha speaking Community of Korphu in Trongsa, Bhutan ‘. Click on image to access collection.

The collection comprises around 50 interviews conducted in Khengkha and Dzongkha in between 2013 and 2017, and elicitation of Khengkha terms. Khengkha is an endangered language used by approximately 30,000 speakers in the Central belt regions of Bhutan. Dzongkha is the national and administrative language of Bhutan.
The interviews revolve around an annual Buddhist mask dance festival performed by the Khengkha-speaking community of Korphu in Central Bhutan, and involves outsiders knowledgeable about the festival. The anthropological ethnographic research looks at the Buddhist performances, liturgy and character of the festival as well as the social, historical and communal context.

The majority of data in this deposit represents the community members of Korphu village in Trongsa district in central Bhutan. Korphu is a rural high-mountain village located in the Jigme Singye Wangchuck National Park with around 70 households.

In this current version, the corpus contains around 40 hours of recorded language use in Khengkha and Dzongkha, mainly interview sessions. Attached to the sound files are transcriptions of the questions and answers in English and a photograph of the interviewee/s for most interviews. The interviews were conducted by Mareike Wulff as main investigator in collaboration with Bhutanese translators.

This deposit is a result of the ethnographic PhD project of the social anthropologist Mareike Wulff on Bhutanese Buddhist mask dance festivals called ’cham. It focuses on the annually performed and one-week long ‘Korphu Drub’ in the village community of Korphu in Trongsa district, Central Bhutan.
For this, Khengkha-speaking community members were interviewed as well as outsiders knowledgeable of the community’s festival. The outsiders are mainly (high-ranking) Buddhist monastics.
The interviews deal with the content of the festival: Buddhist mask dance and folk performances, Buddhist liturgy and warrior dances. This involves the meaning of the performances, the material accoutrements (e.g. masks, costumes, ritual objects), lyrics and liturgical texts. The interviewees discuss the preparations for the festival, behind-the-scenes works, changes of the festival throughout time and their personal involvements. Another big part of the content deals with the embedding of the festival in its social, historical and communal context. These are for instance the story of origin of the village, their affiliation with the Bhutanese saint Pema Lingpa as community founder, common rites of passage, the rural setting of the agricultural village and modern developments. Another focus lies on Buddhist ritual practice as lived and embodied experience on one hand in comparison with the beliefs of formal Buddhism.

The project from which this deposit originated was financed by a ‘Elsa-Neumann-Stipendium des Landes Berlin’ PhD scholarship and the DAAD (German Academic Exchange Service) awarded to Mareike Wulff for the period from July 2011 – December 2014.
Data collection for this project begun in December 2011 when Mareike arrived in Bhutan for the first field work period until May 2012.
The second period of documentation fieldwork took place in between December 2012 until August 2013.
In January/February 2017 Mareike came back to attend the Korphu Drub festival for a third time.

Users of any part of collection should acknowledge Mareike Wulff as the principal investigator. Uses of parts of the corpus should acknowledge by name the people who recorded the given session, acted as translators and the individuals appearing in the recordings whose words and/or images are used. the relevant information is available in the metadata.