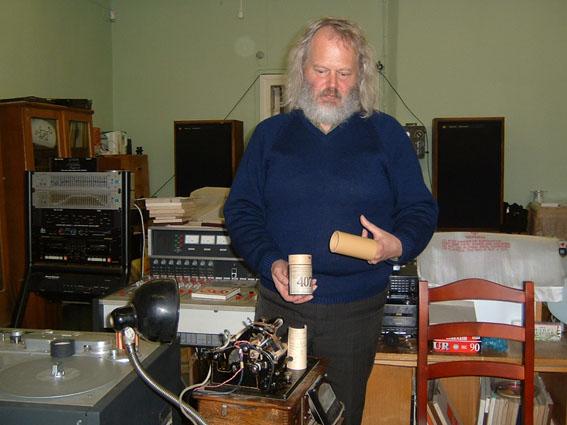 This collection comprises the digitised and restored contents of Alexander L.Grünberg’s collection from Afghanistan. This was one of several private collections that were digitised and stored in the digital sound archives of St. Petersburg as part of this funded project.

Alexander L.Grünberg’s collection from Afghanistan of recorded stories, folklore, singing, and oral traditions of the peoples of Siberia.

In the summer of 2005, a report was published on the research programme called Voices from Tundra and Taiga, initiated by Dr. T. de Graaf at the University of Groningen (Netherlands), the University of St. Petersburg and the Sound Archive of the Russian Museum of Literature, the Pushkinsky Dom (Russian Federation). The programme has been concerned with the study of endangered Arctic languages and cultures of the Russian Federation, which urgently need to be documented before they become extinct. A catalogue has been prepared of existing recordings and also a phonographic and video library of recorded stories, folklore, singing and oral traditions of the peoples of Siberia.

At present, many old recordings still remain hidden in private archives and places where the quality of preservation is not guaranteed. This project aims to make part of these recordings available and to add them to the database developed in St.Petersburg. The St.Petersburg Institute for Linguistic Studies (ILS) is one of the most important Russian centres for the investigation of minority and regional languages in the Russian Federation. Many researchers in this institute have collected sound material and many of these recordings (primary data) are not stored in safe places, whereas the related field notes, manuscripts, card files (secondary data) can be found in the institute or also in private archives.

The aim of the project is to re-record the material on sound carriers according to up-to date technology and store them in a safe place together with the metadata, which will be obtained from the related secondary data. The storage facility provided by the project will modernise the possible archiving activities in the Russian Federation and bring them up-to date with the present world standards. It will be important to co-ordinate this with the staff of the Pushkinsky Dom, where a collection of great historical value (selected by UNESCO in its programme Memory of the World) can be enriched with the new data.

In the beginning of the project two Russian colleagues will be trained in the Vienna Phonogrammarchiv for the period of two weeks. There the director and his colleagues will be responsible to familiarise Russian specialists with present archival standards and modern techniques. Specialists from Vienna will travel to St. Petersburg to install equipment and locally instruct Russian colleagues. They will also stand ready to assist for the purpose of solving special problems.

The various collections to be safeguarded will be brought to St. Petersburg, where they will be transferred along with relevant linguistic materials from the collection of the Archive itself. Copies will be provided to the British Library and the Vienna Phonogramm Archiv.

A documentary film of the Frisian Broadcasting Company Omrop Fryslân, which was broadcast on national TV in the Netherlands (2001), describes the reconstruction of historical sound materials in the archives of the Pushkinsky Dom, the Russian Institute of Literature in Saint-Petersburg. It shows the collection of Edison wax cylinders and the way that material of some endangered languages in Russia can be obtained from these recordings.

Read the open access article: The use of sound archives for the investigation, teaching and safeguarding of endangered languages in Russia, published in the EAP Anniversary publication From Dust to Digital. The article can also be downloaded as a PDF (432KB).