Documentation of formal and spoken Mandaic 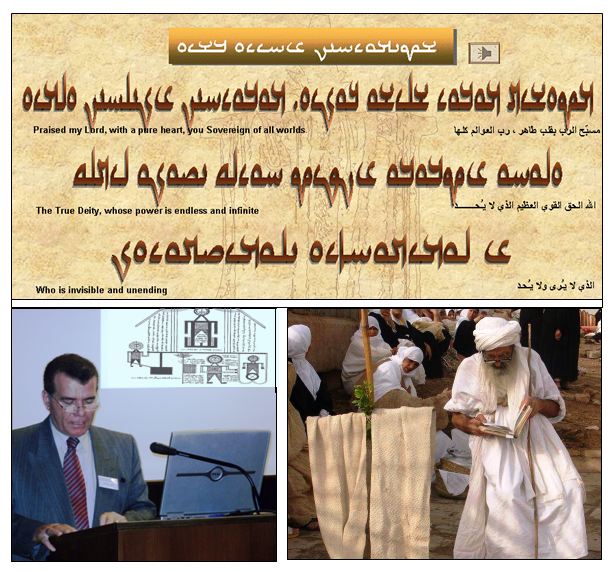 Landing page image for the collection ‘Documentation of formal and spoken Mandaic’. Click on image to access collection.

The Nhura dictionary and Zazai text were created independently by myself, Dr. Qais Al Saaidi, a Mandaean and native speaker of Mandaic. These projects were not funded by any sponsor.

The content of the Nhura Dictionary depends on the Mandaic vocabularies from Mandaean literature, as well as benefiting from the efforts of Theodor Nöldke, Mark Lidzbarski, and Lady Drower in their published translation from Mandaic into German and English. The dictionary covers as many Mandaean vocabularies as possible. It is not limited to a technical language, but rather to general words and terms. The words are from the formal language and not from neo-Mandaic.

All the Mandaeans who are living in Iraq and Iran will benefit from this content because it will reinforce their origin and their history in their homeland. All those wanting to learn the Mandaean language will benefit from this content as well, especially the new Mandaean generation who are living in the Diaspora and searching for an identity for themselves; they may find in their original language an essential aspect of their identity.

Mandaic is an old south-eastern Aramaic dialect used by the Mandaean community. It has its own Alphabet consisting of 24 letters. Classical Mandaic is still employed by Mandaean priests in liturgical rites. Neo-Mandaic or Modern Mandaic is spoken by a small group of Mandaeans around Ahwaz (Iran). Mandaic is an endangered language according to the UNESCO Atlas 2006.

As a threatened language, there are not many Mandaean speakers who can use this language in their houses. There are some attempts to start classes in Iraq, Iran, Australia, and Sweden. Mandaeans used to speak some common Mandaic vocabularies within the languages that they use where they live now.

On the other hand, this language is still used in all the Mandaean rituals. The readings of the texts of ablution, prayers, baptism, marriage, burial rites, are in this language.

As for the non-Mandaeans, they are interested in this language because it is the pure branch of Eastern Aramaic and the closest to understand the Babylonian Talmud.

The Nhura dictionary is the second one in this field. There is a dictionary issued by Drwoer and Macuch (1963). The advantage of the Nhura dictionary is that the Mandaic words were written in the Mandaean font, which provides an opportunity to learn the alphabet of this language as well. It provides the meanings directly without any details that may distract the researcher. The most important thing is that it is the first and only dictionary to provide an English-to-Mandaic translation.

This project is a contribution to documenting this threatened language and supports its learning. Those who wish to translate the written texts or write new texts will find it provides them with good information. It will help them to find the Mandaic word according to the English word they search for.

I started working on the dictionary in 2004 when I worked on my first instructional book titled, I learn Mandaic. This work required the translation of words and sentences into Arabic and English. The work on the dictionary basically was in 2010. It took two years until published in 2012. The work required great efforts, especially in adding the Mandaic font, and because the press asked to have the work in PDF format for they do not have the font.

Users of any part of the collection should acknowledge Qais Al Saadi.