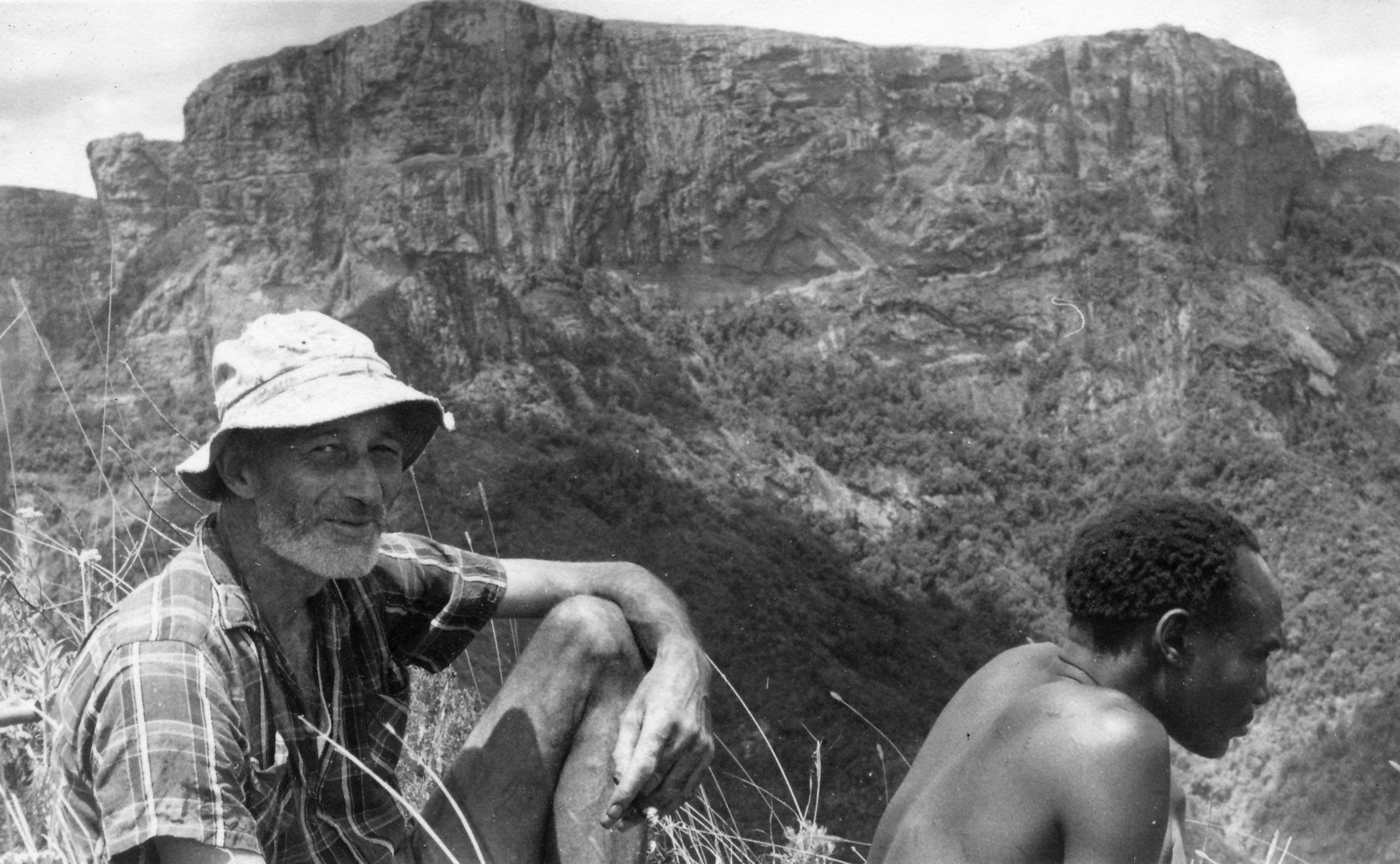 This collection consists of digitized audio recordings of Soo and Nyang’i produced in northeastern Uganda between 1964 and 1972. It includes directly elicited wordlists, songs, traditional narratives, and conversations.

The data was collected by John M. Weatherby, an art teacher, civil servant, and Ph.D. student and by Lokiru Cosma, a community member and research assistant to Weatherby. After Weatherby’s departure from Uganda subsequent to the rise of the Amin regime, the data was stored in Weatherby’s home in Xàvia, Spain. Weatherby’s main objective was to write an ethnohistorical account of Soo culture. He particularly emphasized oral history and religious practices.

The photo at the top of this page shows Weatherby with Loguti, a Soo man from Mount Kadam who was one of Weatherby’s main consultants. In the background is Obda, the highest summit of Mount Kadam. The collection includes recordings of Loguti performing prayers, telling stories, responding to translational elicitation prompts, singing, and being interviewed.

A peer-reviewed open access article describing how Weatherby’s materials came to be in this collection, including discussion of the disciplinary context in which Weatherby worked, how Samuel Beer became involved with the materials, and the social factors that contributed to the preservation of the materials can be found in the journal Language Documentation and Description.

This deposit contains recordings of speakers of Soo and Nyangi. The varieties of Soo represented are predominantly those spoken near the town of Katabok near Mount Kadam and in Lea Valley on Mount Moroto. The Nyangi data comes from the vicinity of Lobalangit on the western slopes of the Nyangea Mountains, the last settlement where Nyangi was used as the daily language of a community. Soo and Nyangi, along with Ik, are the last surviving members of the Kuliak language family, which was likely spoken more broadly before the onset of increasingly close contact with the Southern Nilotic language Pokot and the Eastern Nilotic language Karimojong starting about 1000 years ago. The ascendency of Karimojong in the plains of present-day Karamoja led speakers of Kuliak languages to take refuge in outlying mountainous areas, where all three are found today. Today, most Soo and Nyangi people speak either Pokot or Karimojong.

The Soo and Nyangi practice a variety of modes of subsistence. In the realm of agriculture, traditional staple crops of millet and sorghum have in recent decades been supplemented by maize and cassava. Beans, cowpeas, and assorted greens are also widely grown. Speakers of both languages practice honey-gathering, trapping, and hunting. Mushrooms, fruits, berries, and tubers are common targets of foraging. Relative to their Nilotic neighbors, the Soo and Nyangi both have few cattle; smallstock such as sheep and goats are more common. The fact that there is extensive vocabulary relating to cattle-keeping in the Kuliak languages suggests that cattle were more commonly owned in the past.

Many Soo and Nyangi have taken advantage of greater access to education in recent years; a number of younger Soo adults have some university education, and several Soo are now, for the first time, teachers at schools in the area. In the area of Mount Moroto, many of the more educated Soo have begun working to revitalize Soo language and culture, supported by efforts from the past two members of parliament from the area. Elders who were recently reputed to be reluctant to teach youths or outsiders details about Soo language and culture, have in recent years begun to state that they recognize that the language has not been transmitted to younger generations, and that they wish to try to reverse this process by sharing all domains of knowledge with those who wish to use the language.

Soo and Nyang’i are two members of the Kuliak (or Robic) language family, in which they are joined by a third language, Ik. Each of these languages is spoken in mountainous areas on the periphery of Karamoja sub-region in northeastern Uganda. The external relatives of the Kuliak family are disputed. Many linguists suggest a relationship between Kuliak and the Nilo-Saharan phylum, although there is no consensus about if Kuliak should be part of a larger subgroup within Nilo-Saharan or if it is a primary branch. Other linguists argue that Kuliak should be treated as an independent family.

Both Nyangi and Soo are at an advanced stage of language shift. In 2014, Samuel Beer was only able to identify one speaker of Nyangi (i.e. one person who could produce more than a few words; this speaker was able to tell traditional and personal narratives, for example). Language shift among the Nyangi has mainly been toward Karimojong (Eastern Nilotic); many Nyangi have some degree of proficiency in Acholi (Western Nilotic), Swahili (Bantu), or English (Germanic). Attitudes toward the language are positive, and the Nyangi community has taken meaningful steps toward language reclamation in the past decade. Today, the speaker that Beer worked with in 2014 is joined by one of his sons and one of his grandsons, who are adult learners of the language who use it in a wide variety of interaction types on a daily basis to communicate with their elder, and who have begun offering informal language instruction to a motivated cohort of their Nyangi adults and children.

The number of Soo speakers is somewhat higher–recent estimates indicate around 100 remaining speakers of Soo. In survey work conducted in June 2022, Hercules Singh Munda found that many Soo in their mid-40s and above can understand the language relatively comprehensively, and that Soo younger than their mid-20s can use the language in formulaic genres (e.g. songs, other arts/cultural activities) (p.c.).

The external pressures faced by the Soo speakers on each mountain are different. On Mount Moroto and Mount Napak, language use among the Soo is shifting to Karimojong. On Mount Kadam, language use is shifting to Pokot (Southern Nilotic). This language contact pressure has been going on at least long enough to leave a signature in the materials in this archive. In August 2022, Soo speakers were reliably able to identify whether the speaker was from Mount Moroto or Mount Kadam when audio recordings from this archive were played for them (i.e. their judgments on the matter aligned independently with the metadata provided by John M. Weatherby that accompanied the recordings in this archive). The Soo from Moroto and from Mount Kadam both claim that the Soo from Kadam has been mixed with the Pokot language, whereas the Soo from Moroto has been mixed with the Karimojong language. Soo on Mount Moroto claim that the Soo spoken in Kadam is characterized by distinctive sounds (which at least one consultant has described as “click sounds”, although this term is not meant to align with its technical sense among phoneticians), and that the Soo from Kadam is spoken more rapidly. However, speakers from each location are able to understand Soo from the other location without difficulty. Ongoing research by Hercules Singh Munda will soon provide a perspective on Soo dialectology from the perspective of academic linguistic conventions.

Both Soo and Nyangi are verb-initial languages. Soo marks the person and number of the subject on the verb (1st, 2nd, and 3rd person; singular and plural number, with a contrast for inclusive and exclusive 1st person plural). Residual evidence of a similar system can be found in Nyangi, but different speakers from the historical materials seem to have retained the system to varying degrees. Soo marks three peripheral cases but not core cases, while Nyangi has no remaining case marking. Verbs in Soo are marked for tense, aspect, mood, and direction; verbs in Nyangi are marked for direction.

In terms of phonological typology, Nyangi has attracted some attention in the typological literature for its system of stop consonants; there is a contrast between voiceless stops and voiced stops, and voiced stops are routinely produced with ingressive airstream (i.e. as implosives). Additionally, Nyangi has at least one lateral fricative phoneme. This phoneme can be reconstructed for proto-Kuliak, and it does not have any obvious etymological connection to its Nilotic neighbors or to its nearest neighbors with lateral fricatives, languages of the Tanzanian Rift Valley. In Soo, there is a system of vowel harmony that roughly resembles the ATR harmony systems of neighboring languages; there are nine vowels, with an unpaired low vowel that raises to /e/ when it harmonizes for +ATR. In both languages, a subset of suffixes triggers syncope of the final vowel of the root.

The collection is composed of recordings and field notes that weren’t produced to serve as language documentation in its present-day sense, but instead as the research materials of a historian working within a fieldwork-oriented research tradition. Accordingly, it includes a wide variety of materials that provide context to the core set of audio recordings, which more closely align with what researchers think of as language documentation today. This contextual material includes correspondence, diary entries, photographs, and recordings of bird calls, for instance.

A present-day documentation of Soo conducted by Prof. Celestino Oriikiriza of Makerere University, a linguist, can be found at: http://makir.mak.ac.ug/handle/10570/8392

The collection is still under construction; Beer will be conducting a quantitative summary of the contents before May 2023. The final iteration of the collection is expected to have about 23 hours of audio recordings, 4,000 pages of field notes, and 1,000 photographs.

The recordings and notes in this deposit were made in the 1960s and 1970s by John Weatherby (1910-2003), a British art teacher and PhD student who was preparing a doctoral dissertation on the history and culture of the Soo. The materials have been stored at Weatherby’s home (which is still occupied by his daughter) in Spain since the Weatherbys fled Idi Amin’s regime in 1973. Samuel Beer, the principal investigator, began digitizing and transcribing the data in 2018.

Users of any part of the collection should acknowledge Samuel Beer as the principal investigator and John M. Weatherby as the data collector. Users should also acknowledge the National Science Foundation Documenting Endangered Languages program as the funder of the project. Individual speakers whose words and/or images are used should be acknowledged by name. Any other contributor who has collected, transcribed, or translated the data or was involved in any other way should be acknowledged by name. All information on contributors is available in the metadata.