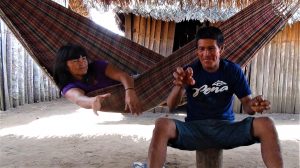 This collection will gather videos on the use of Ka’apor Sign Language by both deaf and hearing speakers, as well a number of translations, transcriptions and analysis, with special focus on the semantic field of tools and locations.

The data will be collected by Gustavo Godoy (anthropologist), Vitória Aniz (linguist), and also by the speakers themselves.

The collection will also include pictures and a small dictionary.

This collection will focus on the Ka’apor people, who live in the Oriental Amazon region, located in the Alto Turiaçu indigenous lands (Maranhão – Brazil). As of today, their population is estimated at approximately 2.200 people. They arrived at the region around 1825 and moved across the river Gurupi during the 1870s, when they fought wars against the Neobrazilian regional population. According to the literature, the Ka’apor were “pacified” in 1928, when they officially came in contact with the national society. However, some linguistic and culture evidences point to the hypothesis that the Ka’apor had met the Portuguese Colony years before that. The Ka’apor territory has been under political attack for many decades now: in the 1960s, during Brazilian Dictatorship, the government set about a series of projects aimed at occupying Ka’apor lands. This occupation process is still undergoing and, although the Ka’apor people have expanded territory to try and combat it, the need for defense against threats and invasions is everlasting. The Oriental Amazon is one of the most endangered forest areas, since it has been on the watch of several lumbering industries for a long time now. The Ka’apor live in one of the biggest nature reserves of the Maranhão State. Also during the 60’s, evangelical missionaries started trying to impose a different religion and rituals on the Ka’apor people. This venture has not yet set a solid ground, but is definitely still present in some of the villages. There are three languages spoken by the Ka’apor community: Oral Ka’apor (which belongs to the maweti-guarani branch of the Tupi languages family), Ka’apor Sign Language (an isolated language used for communication with the Ka’apor deaf population), and Portuguese (well known by some of the people). The Ka’apor languages are vital for social interaction and daily life inside the villages and are transmitted intergenerationally. The community maintain a good relationship, including marriages, with two other indigenous groups: the Tembé and the Guajá. Even children inside the Ka’apor lands who have Tembé or Guajá parents are taught the Ka’apor languages. Ka’apor nourishment comes mainly from Mandioca-Brava (a type of Cassava) plantations, from which they produce farinha-puba (a type of flour). This farinha-puba is one of the most consumed foods inside the villages, together with meat and fish. The meat of the yellow-footed tortoise, for instance, is vital for the community rituals. They collect some fruits such as açaí, bacuri, ingá and piquiá. And cultivate others, such as cashew, mangoos and cupuaçu. The Ka’apor are also known to buy some food and utensils from neighboring cities. Their only collective ceremonial ritual is called Cauinagem and happens as a means of naming children and settling political agreements, such as change in leadership. Cauinagem is a party for which the Ka’apor prepare themselves by fabricating accessories from bird plumage. This plumage is brightly colored and usually dazzles tourists, collectors and museum-goers. In the middle of the year, the Ka’apor also partake in a common Brazilian festival called Boiada. The Ka’apor practice a leadership system based on Pajelança, which is similar to the one used by their neighbors, the Tembé.

Ka’apor Sign Language (UKS) is one of the languages spoken inside the Ka’apor indigenous villages in Maranhão, Brazil. Research has estimated that between 7 and 13 deaf Ka’apor people use UKS as their first and only language, and that a great number of hearing Ka’apor people use it occasionally, with varying degrees of fluency. Because UKS is spoken by people regardless of hearing loss, it has been considered a “shared sign language”, meaning that the monolingual deaf speakers are not linguistically isolated and are able to communicate freely in a variety of situations and environments.

Oral Ka’apor and Brazilian Portuguese are also spoken inside the Ka’apor villages. However, due to the nature of village sign languages, UKS is isolated and has no genetic ties to any other language in the world. UKS has been known by scholars at least since the 1940s, when anthropologist Darcy Ribeiro first noticed a significant presence of signing deaf people in the region.

The bundles in this collection will include:

Users of any part of this collection should acknowledge Gustavo Godoy and Vitória Aniz as the data collectors and researchers. Users should also acknowledge the Endangered Languages Documentation Programme as the funder of the project. Individual speakers whose words, signs and/or images are used should be acknowledged by name. Any other contributor who has collected, transcribed or translated the data or was involved in any other way should be acknowledged by name. All information on contributors will be available in the metadata.