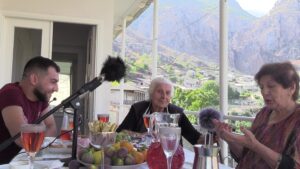 Landing page image for the collection “A Documentation of the Zok Language (otherwise known as the Armenian dialect of Agulis)”. Click on image to access the collection.

The deposit is the result of a documentation project of the Zok language (otherwise known as the Agulis dialect of Armenian), funded by ELDP from 2021-? This includes data in the Agulis subdialects formerly spoken in the villages of Tanakert, Tsghna, Ramis, and Paraka (see Acharyan 1935), as well as some recordings in related dialects of the Meghri area (Karchevan, Kuris) that are considered forms of the same dialect (Agulis-Meghri) by Jahukyan (1972) and also by Sargsiants (1883). The bulk of the data is comprised of video recordings of spontaneous speech, on topics mainly chosen by the consultants, including details of historical and cultural interest, for example religious practices, food production (including video demonstrations), silk production, agricultural practices, uses of wild plants, aspects of life in Soviet times, interethnic coexistence and conflict. Most of the recordings involve natural interaction between native speakers. There are also some recordings of descriptions of the Pear Story video (Chafe 1980). Also included in the deposit are some audio recordings in Paraka subdialect collected as part of an earlier project (Hodgson 2019), including responses to stimuli designed to elicit relative clauses.

Zok is a form of Armenian (independent branch of Indo-European family) that is so divergent that it has been classified as a separate language. It was originally spoken in Nakhijevan (present-day Azerbaijan). The last Armenians of Nakhijevan were displaced by conflict in 1988. Zok is reported to have had around 10,000 speakers in 1935 (Acharyan 1935); although there are no official statistics, it is certain that the number is much smaller today, almost certainly less than 1,000. The Paraka dialect, on which I intend to concentrate in this study, probably has less than 50 speakers still living (according to the Armenian National Archive, the population of the village was 90 at the time when the last Armenian residents were displaced in 1988). The most immediately distinctive feature that separates Zok from other forms of Armenian is the vowel system, which has undergone radical changes, and acquired a unique form of vowel harmony (see Vaux 2008). There are also important morphological and syntactic innovations, notably including a reorganization of the TAM system that is unique within Armenian.

The group represented in this deposit are the Zoks, i.e. the Armenians of Agulis (Azerbaijani Yuxarı Əylis) and the surrounding villages, in the southern part of Nakhijevan region (Azerbaijani Naxçıvan), the last of whom were forced to leave the area in 1988 due to conflict between Armenia and Azerbaijan. Due mainly to the fact that their language is unintelligible to other Armenian-speakers, they were believed by some to be wholly or partly of non-Armenian (possibly Jewish) origin, although linguistic evidence does not support this. They were a tight-knit community with a distinctive cultural identity, known for their skill in handicrafts including silk production and carpet weaving, but chiefly for their extraordinary international trade networks that flourished from the 17th-19th centuries, whereby individuals from these few small villages in Nakhijevan spread out across Europe and Asia, from Amsterdam and Venice to India and China, while all the time maintaining close links to their community and villages of origin, which were fundamental to the operation of the networks (see Chaudhury & Kévonian 2007). The town of Agulis was destroyed in 1919 (it was partly rebuilt in Soviet times, but not reoccupied by Armenians); most of the surviving Armenian population left the area, and their language has not survived. However, some speakers remained until the 1980s in the villages of Tanakert, Tsghna, Ramis, and Paraka. The name Zok in common usage only refers to the inhabitants of Agulis itself and the closest villages (including Tanakert and Tsghna), but it is recognized that the dialects spoken in Ramis and Paraka are forms of Agulis dialect (Acharyan 1935), and that those of the adjacent area around Meghri in Armenia (including Karchevan and Kuris) are closely related (Jahukyan 1972 speaks of the ‘Agulis-Meghri’ dialect). This documentation project was carried out with speakers originally from Nakhijevan resident in various parts of Armenia (Yerevan, Ararat province, Vayots Dzor province), and with local speakers in the area of Meghri (Karchevan, Kuris), Syunik province.

In its current version, this deposit contains 27h 47 min of material collected from June to November 2021, of which 26 h 6 min consist of video and, due to technical issues, 101 min audio only. Most of this consists of spontaneous speech, but there are some responses to the Pear Story video (Chafe 1980). A small amount of the material is semi-spontaneous (the speaker has made notes before speaking). Some of the sessions are accompanied by relevant photographs (e.g. places or objects mentioned). So far, 4 hours have time-aligned transcriptions made by native speakers in collaboration with the principal investigator, and morpheme-by-morpheme glosses. In addition, the deposit also contains 146 minutes of audio material in Paraka dialect collected between 2014-2016, of which 76 minutes are responses to stimuli designed to elicit relative clauses (the stimuli are also included in PDF format), and 70 are free speech (memories and stories of life in Paraka).

The project from which this deposit originated was financed by an ELDP Individual Postdoctoral Fellowship, the first part of which was awarded to Katherine Hodgson for the period from May 2021 to February 2022, the second part of which is awaiting confirmation. The audio material collected between 2014-2016 is from a project financed by the Sorbonne-Paris-Cité INSPIRE programme (3-year PhD scholarship for international students 2014-2017). Data collection for the ELDP project took place during Katherine’s stay in Armenia from June to November 2021.

Although some written texts exist in Zok (many of which are collected in Ayvazyan 2011), and grammars and glossaries (in Armenian) have been produced (Sargsiants 1883, Acharyan 1935, Zakaryan 2008), there is, to our knowledge, no publicly available audio or video material of spontaneous speech. This deposit fills that gap, providing information essential to many kinds of linguistic analysis, such as intonation, which is crucial to understanding the workings of information structure, and phonetic and phonological detail absent from or standardized (sometimes inaccurately) in written texts. In addition, it provides material on dialect variation within Zok that has not been systematically recorded. Sargsiants (1883) presents some examples of the differences between the dialects of Agulis and Tsghna, but this is very far from a complete description of Tsghna dialect, and he also implies that the dialect of Ramis is the same as that of Tsghna, which is not the case (although it shares some features that distinguish it from the Zok of Agulis itself). To our knowledge, apart from the material collected here, there is no information publicly available on the dialect of Ramis. Some field notes on vocabulary, phonology, and morphology were made in Soviet times by the H. Acharyan Language Institute of the Republic of Armenia, but these have apparently been lost, as have those on Tanakert and Tsghna. The same project recorded field notes on the dialect of Paraka, which exist, but have not been published. Ayvazyan (2011) contains a text supposedly in Paraka dialect, but judging by the field notes and the materials collected by this project, it does not accurately represent the dialect. This deposit contains extensive material in Paraka dialect. It allows a detailed comparison between the forms of the language spoken in Tanakert (very close to the dialect of Agulis itself), Tsghna, Ramis, and Paraka, thus illuminating the relationships between them, as well as the relationship between Zok and the related dialects of the Meghri area (Karchevan and Kuris).
In terms of salient linguistic features, the recordings in this deposit include narratives, descriptions, procedural discourse, and everyday conversation, as well as responses to the Pear Story video (Chafe 1980), allowing a detailed investigation of the unique tense and aspect system of Zok as it is used in natural discourse. It also allows an investigation of complex case forms (showing that they are not necessarily associated with animate referents, as Sargsiants (1883) suggests), and of word order and anaphora patterns linked to information structure: the use of postverbal arguments and of the pronoun inkʿə are topics of interest in this context, see Samvelian et al. (to appear), Donabédian-Demopoulos (2007). This deposit also contains responses to stimuli designed to elicit relative clauses, which provide new information on this topic (Hodgson 2019).

The standard (Hübschmann-Meillet) system for transliterating Armenian in the Latin alphabet is based on the pronunciation of Classical Armenian, and contains some symbols which are misleading in the light of modern pronunciation, so an adapted version has been used, and applied phonetically, with extra symbols for sounds not used in Classical or Standard Armenian:

Users of any part of this collection should acknowledge Katherine Hodgson as the principal investigator, and the Endangered Languages Documentation Programme as the funder of this project. Users of parts of the corpus should acknowledge by name the people whose words and images are used (details in the metadata).