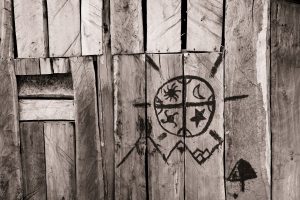 The collection gathers audio-visual material of a typical Pewenche journey through the Andean valley of Butalelbún, Alto Biobío, Chile. It constitutes a first approximation to Chedungun, a Mapudungun dialect spoken by approximately 5,000 speakers along the Queuco river valleys. The aim of the deposit is to document the Pewenche transitional lifestyle and language use. The collection encompasses both naturally occurring and elicited communicative events, before, during and after three seasonal ascent to the Pewenche summerlands of Cochico (the Andean highlands that are occupied by the Pewenche families between the melting of snows and the arrival of winter).

The Pewenche are a semi-nomadic indigenous group that lives in the Andean valleys of south-central Chile and adjacent Argentina. Although their native language, Chedungun, has been recognized as a dialect of Mapudungun (arn, Mapu1245), some of its features remain understudied and its degree of endangerment fairly underdetermined. A relevant fact about the Pewenche is that they constitute the only indigenous group within the Araucanian sphere that has been said to have an independent origin. In effect, studies suggest that the Pewenche transited for centuries through the nomadic routes on both sides of the Andes. This cultural background makes salient one relevant fact: of all the ethnic groups that give shape to the Araucanian universe, the Pewenche is the only one that carried (and still carries) a semi-nomadic lifestyle. The summerlands – the highlands that are occupied by the Pewenche families between the melting of snows and the arrival of winter – is a perdurable sign of their migratory lifestyle.

No matter how crucial for their cultural identity, though, this migratory element has not been immune to the multiple endangering factors of modern times. On the contrary, the heritage value of the Pewenche summerlands has been once and again defiled by state policies and socio-economic circumstances. In effect, several studies have shown the detrimental effects of Chilean state policies and private companies over the last two centuries, especially with respect to the Pewenche ancestral territorial system. That the Pewenche migratory practices are approaching their last generational stages is an undeniable and disturbing fact that can only be overcome by raising a serious voice of concern of what these cultural goods represent. The urge of documenting the speech events surrounding the Pewenche migratory cycle emerges, then, from two intertwined factors: the endangerment of their language and the endangerment of their lifeforms.

Chedungun is a Mapudungun dialect spoken by approximately 4,500 speakers along the Queuco river valleys. Although the language has been recognized as a dialect of Mapudungun (and hence classed as an Araucanian language), some of its features remain understudied and its degree of endangerment fairly underdetermined.

One of the members of the documentation team, depositor Sonia Vita Manquepi, is a linguist and native speakers of Chedungun. Her role has been crucial for both the materialization of this project and the community engagement, which includes her own parents, sisters and brothers. In the same vein, main field assistant Mónica Vita Manquepi has contributed with an invaluable work during the coronavirus pandemic, self-documenting her native language with interviews to members of her own family. This results in a rich recorded testimony of the ethnographic and sociocultural background of the Pewenche summerlands. We believe that the material constitutes a novel source for anthropological and historical research, given that such testimony is offered by prime participants in their own language.

The migratory journeys through the Pewenche summerlands are still prevalent in some indigenous communities of Butalelbún, the most eastern of the Pewenche valleys along the Queco river in Chilean territory. A typical ascensional journey consists of four to five hours horseback riding through interandean routes that oscillate between the 1500 and 2200 m.a.s.l. The material compiled in this collection involves three journeys made with a large number of members of the Vita Manquepi family, a highly motivated group that have preserved their ancestral traditions despite the adversities of times.

In its current version, the collection gathers approximately 10 hours of recorded language use. The deposited data register both naturally occurring and elicited communicative events, before, during and after the ascents to the Pewenche summerland of Cochico (Alto Biobío, Chile). The collection also contains a small but growing photographic catalogue of the summerland, which will include in time both documentary landscape and portrait photographs.

Among the activities recorded in the audio-visual data we can mention:

At this stage, part of the material is undergoing the process of annotations, which will include transcription, translation into English and Spanish and an incipient grammatical analysis. A showcase of 25 minutes is made available for users (bundle session Cheesemaking, sg0574_fwt1_d03_2ed). It is expected that the annotated material substantially increases in 2021.

Thanks to all the members of the Vita Manquepi family in Butalelbun for an endearing and very productive journey to the Pewenche summerland of Cochico.

Special thanks to Mónica Vita Manquepi for her incredible work and collaborative spirit throughout the project.