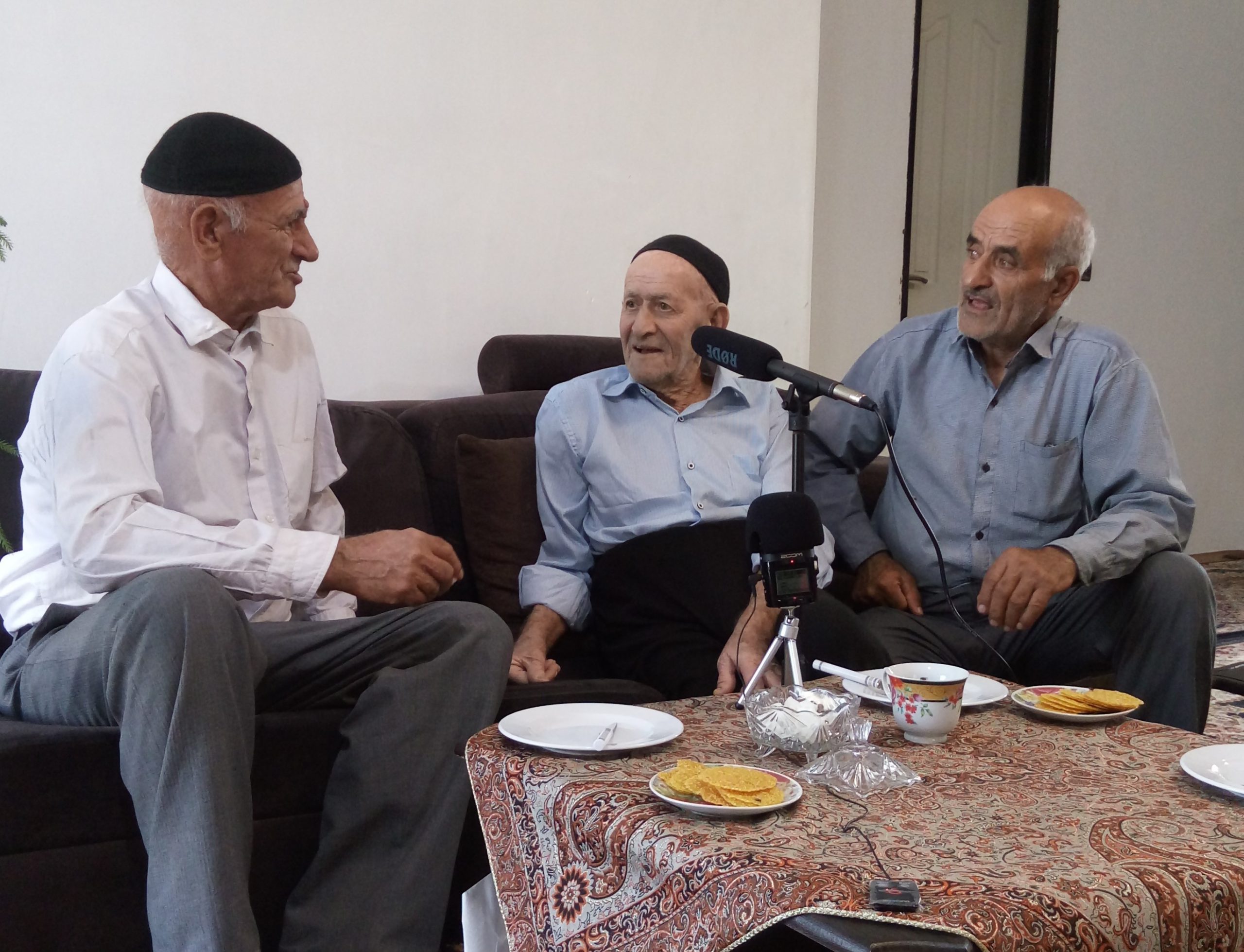 Deposit page image for the collection ‘Documenting New Year ceremonies of Tāts of Upper Tāromi in Hazārrud’. Click on image to access collection.

This project documents traditional New Year ceremonies in Hazārrud village in Tārom district of Zanjān province in Iran, as recounted by the remaining Tāti speakers of the village. The estimated number of Tāts with an active command of this variety is less than 10, all more than 70 years old. The traditional New Year celebrations are no longer actually performed in the village, where the language of wider communication is now a variety of Azeri Turkic, or increasingly, standard Persian. The Tāti dialect of Hazārrud has remained highly conservative compared with other Tāti dialects, and along with the cultural content, the project will contribute to our understanding of the dynamics of language shift and change in the highly diverse, and rapidly declining Tātic group of languages.

Upper Tāromi is classified in the Tatic group of Northwestern Iranian languages (Glottolog.org). The Tatic family consists of: A) highly diverse Tati (Tāti) dialects that are sparsely spread over a discontinuous area extending from Vafsi in the south near Saveh to Kilit (now extinct) of Nakhichevan/Naxjavān province of the Republic of Azerbaijan north of the Araxes; B) Talyshi (Tāleshi/Taleshi in Iranian sources), ranging from the northernmost dialect of the Masally area of Azeerbaijan to the Rudbār valley in Iran; C) Tatoid, two Tati-like offshoots, Rudbāri and Tāleqāni/Alamuti (Stilo 2018: 659). By ‘Tāti’ are meant the Iranian dialects spoken in northwestern Iran (excepting Persian and Kurdish), in areas where the common vernacular is Azerbaijani Turkish. The similarity between these dialects, spoken sporadically in an area extending from the southern borders of the Aras River to the north of Sāveh, justifies a common appellation. Technically speaking, Tāti does not refer to any particular dialect or group of dialects. The word tāt is generally used in the area to denote the Iranian-speaking peoples in the region (see Minorsky 1936, under ‘Tāt’). The designation of these dialects by ‘Tāti’ follows this general and vague usage. Yarshater (1969) proposed to call these dialects ‘Median’, a more appropriate appellation. The main areas where Tāti is spoken fall roughly into five groups one of which is the dialects spoken in Khalkhāl and Tārom. This group of dialects has a wide range and is rouphly divided into two major groups: those which distinguish the feminine gender (some dialects in Khalkhāl and some dialects including Hazārrudi in the Upper Tārom) and those which do not do so. The difference between some of these ‘dialects’ is minimal. They are often mutually intelligible and sometimes are no more than variants of one another. Only with this understanding, the language of each village has generally been called a ‘dialect’. Tāti dialects constitute one of the most important branches of North-Western Iranian. Their many remarkable grammatical features and their many archaisms in morphology, syntax, and vocabulary invite special attention, and their geographical position and their significance for a reconstruction of the development of North Western Iranian call for intensive study. Systematic investigation is required to clarify the details of the known Tāti dialects, which are generally only imperfectly studied (Yarshater 1969: 18). Tārom is a mountainous district in north of Zanjān province. It is located in south of Khalkhāl and north of Soltāniyye. Traditionally, Tārom is divided into two parts: to the north the Upper Tārom (Tārom-e Olyā) and to the south the Lower Tārom (Tārom-e Soflā). Tārom achieved some significance at the time of the Mosaferids, a Dailamite dynasty (tenth and eleventh centuries) which rose from the region and at times reigned over Qazvin, Azarbaijān, and part of Armenia. After long years of Turkoman domination, the vernacular of Tārom and Zanjān has become Turkish, but still in the Upper Tārom there are pockets of Tāti-speakers who have preserved the Median dialect of the region. Unlike the Tāti-speakers of Rāmand (southwest of Qazvin), the Shāhrud of Khalkhāl, and Rudbār, the Tāts of Tārom do not constitute any extensive Tāti-speaking community, and except for a small cluster of villages in the north, they form, generally, isolated pockets surrounded by Turkish-speaking villages (Yarshater 1970).

Upper Tāromi is a Northwestern Iranian language of the Indo-Iranian group of Indo-European language family. It is spoken by a small cluster of communities in a mountainous district of Khamsa, south of Khalkhāl and north of Soltāniyye in Zanjān province in North Iran. After long years of Turkoman domination, the language of wider communication in Tārom region has become Turkish, but there are still to be found in the Upper Tārom pockets of Tāti-speakers who preserve the indigenous dialect of region. The Tāts of Tārom do not constitute any extensive Tāti-speaking community, and except for a small cluster of villages in the north, they form, generally, isolated pockets surrounded by Turkish-speaking villages. Some ten villages in Upper Tārom are Tāti speaking. One of these villages is Hazārrud which is a fairly large village of some 300 families, of which only some 30 to 40 were Tāti-speaking in 1965 when Yarshater visited this village, and the rest of village were speaking Turkish. Yarshater (1970), a 16-page paper, is the only direct reference on Upper Tāromi, and briefly indicates points of difference between this dialect and the other Tāti dialects of Tārom. Nowadays it is said that only a handful of old people can speak Tāti dialect of Upper Tāromi and the younger generations can only speak Turkish and Persian.

The primary outcome of this project will be a set of video-recorded oral history narratives recounting the traditional New Year celebrations and other rituals of rural Tāt speech communities prior to the current period of assimilation and language shift. A selection will be transcribed, annotated and translated which will yield a short lexicon and a grammatical sketch of this language. From the video material, I intend to supply a suitably sub-titled (Persian) selection for community usage.

Along with preserving anthropological and social aspects, the data are also invaluable for the linguistics of northwest Iranian. While aspects of some Tātic varieties have been sporadically described over the past decades (see Stilo 2018 for summary), the full range of diversity in this group has barely been addressed. The collected data set of this project will shed light both on the internal make-up of the Tātic group and its relations to Northwestern Iranian in general, but also yield insights into intergenerational patterns of language shift within the complex trilingual (Azeri- Tāti – Persian) language setting. Along with the lexicon and grammar sketch, we intend to complete at least one more theoretically-oriented journal paper on the linguistic aspects.

In addition to the purely linguistic aspects of the project, there are considerable community-related benefits, given that the vast majority have become Turkish speaking, so that children are unable to understand the stories of their grandparents. The grandchildren of Tāti speakers in Hazārrud are now extremely willing to preserve the last memories of what was spoken in their village before.

There will be upwards of 4 hours video and parallel audio recordings of oral history narratives recounting the traditional New Year celebrations and other rituals, everyday language use, and procedurals of rural Tāti speech community of Upper Tāromi spoken in Hazārrudi.
A selection of 1 to 2 hours of the recorded material will be transcribed and translated in ELAN.

The data for this collection will be collected during a field trip to Hazārrud village in November-December 2019 by Raheleh Izadifar, the principal investigator. During this trip, she will record at least two native Tāti speakers of Hazārrudi who have given their consent of being recorded. Raheleh intends to make video and audio records of these people recounting oral history narratives of mostly traditional New Year celebrations and also other rituals of Hazārrud. Then she intends to transcribe a 1-2 hours selection of the recorded material with the assistance of native speaker consultants especially younger members of the community who might have some fluency in the language or native speakers of close dialects and to translate the material into English. She will consult with Professors Geoffrey Haig and Donald Stilo in data analysis. Raheleh will have a second field trip to Hazārrud probably in June 2020 to finalize and check recordings, transcriptions and translations with native speakers and to deliver a subtitled video of the recorded material to the community.

None of the data in this collection may be used as evidence in courts.

Users of any part of the collection should acknowledge Raheleh Izadifar as the principle investigator and Geoffrey Haig as the supervisor and Donald Stilo as the consultant of the project. Users should also acknowledge the Endangered Languages Documentation Programme as the funder of the project. Individual speakers whose words and/or images are used should be acknowledged by name. All information on contributors is available in the metadata.