Documentation of the Even language and culture in Kamchatka 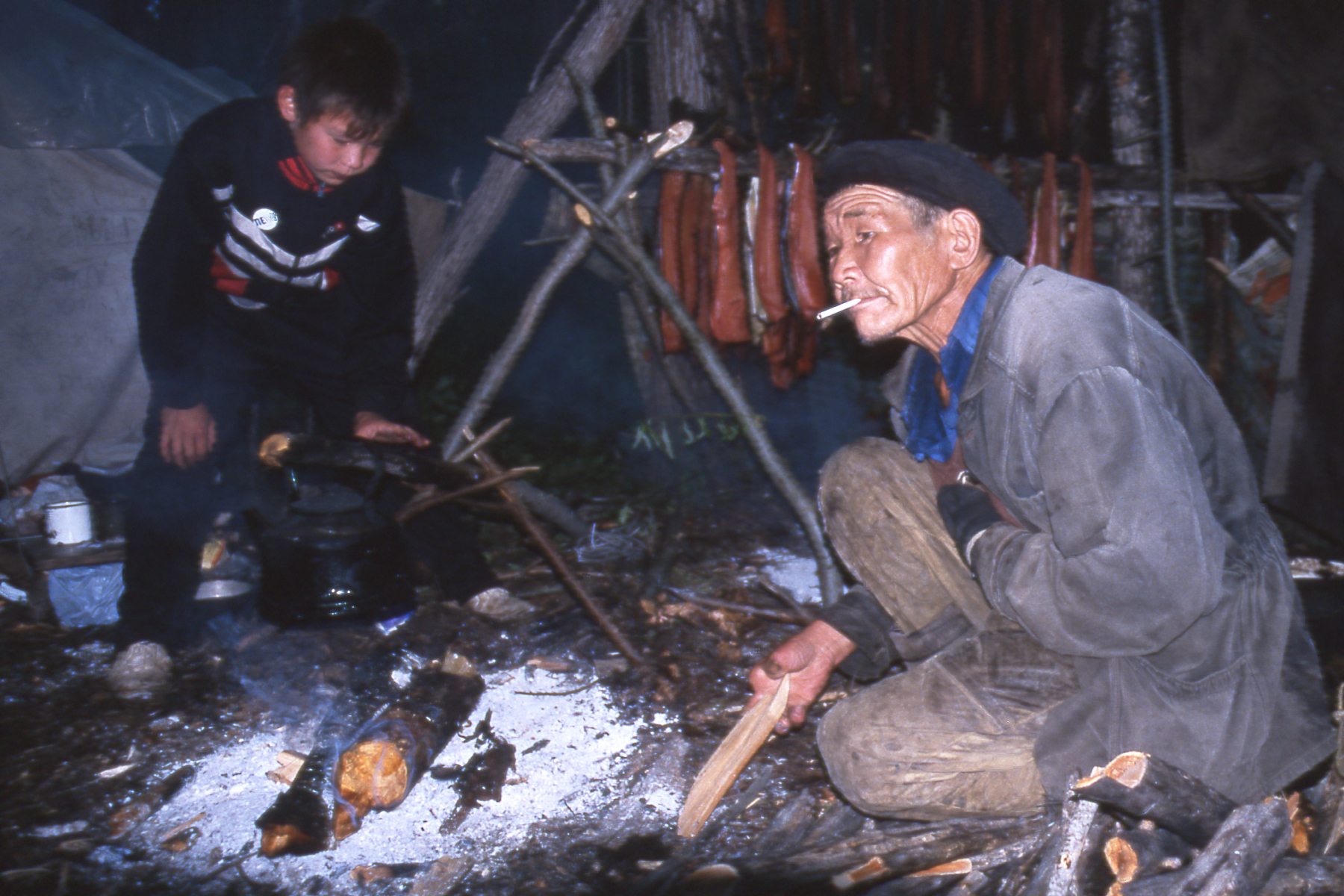 Landing page image for the collection ‘Even language and culture’. Click on the image to access collection.

The Evens are a Tungusian people spread over large parts of Siberia west of the Okhotsk Sea and north to the Kolyma River. The migration of some Even groups from the north to Kamchatka did not take place until the years between 1830 and 1840, where most of them eventually made their home in its central part, which belongs today to the Bystrinski rayon. First, Evens were mainly hunters, who brought only few reindeer with them for transport. Only later they developed reindeer herding into one of their main livelihoods. In written sources, the Evens in Kamchatka have been mentioned first by Carl von Dittmar (1856). But in general they have been rarely described by other scientists who at that time travelled mostly through the Kamchatka valley and along the west coast. From the 1920s we have more in-depth ethnographic observations, when Sten Bergman (1926) had stayed with Evens in the mountainous regions of western Kamchatka.

During the longer period of isolation from other Even groups living on the mainland, Evens in central Kamchatka preserved or devoloped their own variant or dialect of their language. Therefore the elder first language speaker generation became reluctant when school books were based on another Even dialect, spoken in the distant Magadan region, that eventually became the Even standard language taught at school. This impaired elders to communicate with the youth in their own language. Although new language school programmes and school books that were launched in the 1980s might have been well-meant by the authorities, they often caused confusion and most likely have contributed to the increasing loss of Even language use, notably between generations and among the youth.

The Even language recordings by Erich Kasten that originate mostly from the years around 2000 pay attention to the pressing need to document and to archive this particular variant of the Even language, in order to create more useful learning tools from them and aiming to keep this special dialect alive this way.

The data of this collection come mostly from the Bystrinski variety of the Even language. Most of the speakers lived in the villages Esso and Anavgai. Some others had been recorded at their places of temporary residence in the tundra and taiga (fishing and reindeer herding camps). Two more speakers were originally from the Bystrinski rayon, but later moved with their wifes further north to Palana. Three speakers are from Khailino in the Aliutorski district at the most northern part of Kamchatka, who had been recorded there in 2002 during a museum’s field project on material culture.

Even is a Northern Tungusic language closely related to Evenki with a total of 5656 speakers (2010 census). Evens who live since the early 19th century in the Bystrinski rayon in Central Kamchatka speak a variety of the Even language that clearly differs from the dialects that are spoken in the North and in the Magadan area, on which the standard for Even school books even for Kamchatka had been set. Also here, the same as for the Koryak, this has caused problems as soon different varieties of the Even language have been transmitted to younger generations at the same time at home and at school. Most of the Even language material for the given collection had been recorded during the years around 2000 in the villages Esso and Anavgai, where today live less than 1000 Evens. Also here the number of first language Even speakers has been shrinking drastically since the end of the 1990s, when E. Kasten started his language recordings with them. Today the number of first language Even speakers in central Kamchatka can be estimated less than 100, all of older or, at best, middle age.

In the beginning, from 1998 to 1999, some of the texts had been recorded as audio, others already on video. Later on all recordings were later taken consistently as video.

This collection includes about 21 hours of Even texts from first language speakers and a few texts in Russian by younger Evens. The collection is structured in bundles according to certain themes: ELC1 The remembered past or life histories, ELC2 Traditional ecological knowledge and resource use, ELC3 Crafts and decorative arts, ELC4 Tales, songs and worldviews. Another bundle, ELC5, contains recordings on mostly arts and crafts with Evens living in the Aliutorski District. In addition to annotated Even audio and video language documentation in ELAN and PDF files the collection also contains many hours of edited video recordings of cultural activities during workshops, mainly choreographic performances, as well as economic practices.

Local educators in the Even villages Esso and Anavgai were aware of the confusing learning tools that existed until the 1990s, when Marina Tarasova, the Even school teacher in Anavgai, first met with Erich Kasten in 1996, after he had made a stop on his way back from Kovran. There he had already gained some experience with similar work on Itelmen language since 1993. During his next visit in 1998 the local community was quite impressed by the new learning tools that he and his local team had recently produced on Itelmen language and culture (Khaloimova et al. 1997, https://dh-north.org/publikationen/istoriko-etnograficeskoe-ucebnoe-posobie-po-itel-menskogo-jazyku). Therefore, Marina Tarasova and Erich Kasten decided to launch an initiative to record texts from the last generation of first language Even speakers, most of whom are no longer alive today. During this documentation it soon became clear that it was most crucial to stimulate interest and enthusiasm among the youth in order to sustain Even language and indigenous knowledge. Together with local educators and dance pedagogues Erich Kasten organised a number of workshops in Esso and Anavgaj (https://dh-north.org/dossiers/workshop-zu-tanz-und-gesang-in-esso) that integrated indigenous languages and art performances, and which later resulted in tours of Even dance ensembles to Germany in 1999 (https://dh-north.org/dossiers/gastspielreise-des-ensembles-nulgur), and to Germany and Switzerland in 2008 (https://dh-north.org/dossiers/gastspielreise-des-ensembles-or-jakan).

While some of the collected language data had already been transcribed and translated during the years after 2000, its publication for learning tools was delayed for several years after Erich Kasten had to focus his research on Koryak language and culture since then. During these years he established fruitful collaborations with cultural and educational institutions in Palana in northwestern Kamchatka, among others with Raisa Avak, the leading expert on the Even language at the teacher training college there. Over the years, Raisa Avak and Erich Kasten worked up and co-edited already part of his Even language repository in form of trilingual learning tools. About one third of the repository has already been published in two volumes and DVDs in 2014 (https://dh-north.org/publikationen/even-tales-songs-and-worldviews-bystrinski-district) and 2018 (https://dh-north.org/publikationen/clothing-and-decorative-arts-evens-kamchatka-bystrinski-district).

This project will facilitate to fully process the remaining part of Erich Kasten’s Even language and culture repository and to archive it in a sustainable way together with already finished other Even materials at ELAR. By additional dissemination via the dh-north portal these unique recordings on Even language and culture will be made easily accessible to various user groups, and notably to Even communities in Kamchatka – and this way contributing to sustain their cultural heritage.