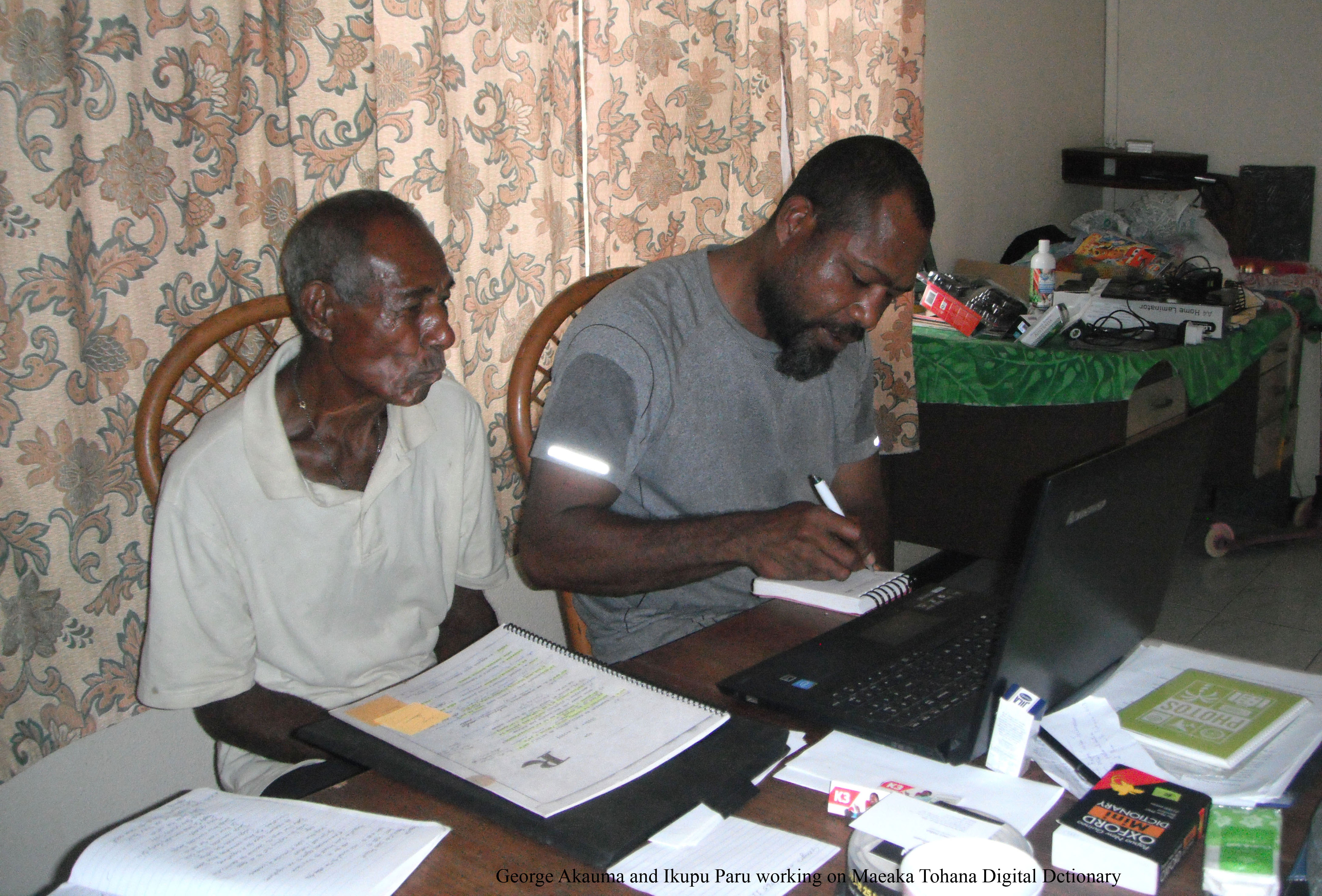 Waima/Roro is an Austronesian language in the Malayo-Polynesian group. It is spoken in Kairuku District, Central Province, Papua New Guinea by approximately 12,000 speakers including children. It has three main dialects – Waima, Roro and Paitana. ln this project the name Roro or Waima/Roro is used.

Although Roro is currently listed on Ethnologue as ‘developing’ there is much concern in the senior population that the language is being severely impacted upon by the effects of modern living that are overtaking the community at a confusingly rapid rate. The project team prefers to describe the language as ‘adapting’ because much of the documented vocabulary is no longer familiar to fluent speakers, whereas new terms and expressions from surrounding languages, including English, are superficially adopted by the youth to fit a poorly understood grammatical structure. There has been no recent study of language stability.

The Maeaka Tohana project is responding to a request from elders to create, in modern form, the first publicly accessible dictionary of the Waima/Roro language, based on the rich and detailed information recorded progressively by missionary scholars from 1898. This is the first time the language data has been described in English and, because the project has a primary goal of skills transfer, the first time that a literate native speaker has had a leading role in the review process.

Most senior people are literate in the language because of their rigorous missionary education, but this is not so for young people. It is felt that a quality standard reference must be developed now, while there are speakers who have insight into the subtleties of the language. The information exists, but it is described in French which is not useful for the modern community. It is not a matter of simply translating the French, because that contains spelling and grammatical, as well as usage, errors. 2019 was the 80th anniversary of the most recent update by Paolo Coluccia, M.S.C., making it particularly appropriate that the work was being done in earnest then.

Speakers of Waima/Roro occupy discontinuous coastal land from Cape Possession in the North-West to the village of Hisiu in the South-East, including Yule Island which is close to the coast opposite the mouth of the St. Joseph River. The French-speaking Catholic Missionaries of the Sacred Heart (MSC) established a presence on Yule Island in June,1885. The London Missionary Society (LMS) was already in place with evangelists from Samoa. The different backgrounds of the evangelising groups resulted in slightly different renditions of the language in writing. These differences, though not extreme, are still evident and identify people as being Catholic or LMS. Both groups were quick to learn the language and published their own vernacular versions of the Gospels by about 1930. Education materials were also produced in both orthographies. This dichotomy did not unduly upset the speakers as they were, and still are, keenly aware of dialects within their language and were fluent speakers of neighbouring languages. This project is built upon original documents created by the French scholars, which are now archived at the Catholic Diocese, Bereina Station, Central Province, PNG. During the pioneering phase of the mission, all personnel were encouraged to become fluent in the language as soon as possible. This they did, resulting in a plethora of written materials in both French and Roro. Most often handwritten or typed manuscripts were bound and archived. However, there is some evidence of letters and stories in careful handwriting. The people continue to live in much the same way within villages and adapting as best they can to modern lifestyles. Influences of English, Tok Pisin, radio, television, and mobile phones, coupled with Western-style education, faster transport to town and an impending major highway cutting through their lands, all impact on their ability to maintain the integrity of their language. When presented with the opportunity, elders at Hisiu village were quick to nominate three suitable people to work with a volunteer linguist to create a benchmark reference from the early documents. To date there has been no negative sentiment expressed about the project.

A revised and edited bilingual presentation of the Waima/Roro dictionary last revised by Paolo Coluccia, MSC in 1939.

Phase 1 has shown that the mere existence of the project puts a value on language and cultural knowledge, lifting self-esteem and boosting cultural identity in those who are aware of it. Less obvious, but highly significant, are the associated outcomes of the project. These outcomes can be observed in:

Because of the restrictions imposed by COVID19, work during 2020 was conducted remotely. The video record for 2020 therefore consists mainly of vision of the changing computer screen in Australia with audio of the two researchers discussing entries and making required amendments. Dropouts due to poor connection, and environmental sounds are unavoidable aspects of these videos. Some audio samples may also reflect environmental conditions, as they were often recorded at night when the sea is loudest and voices are softest.

The project will result in:

The majority of information in this project was first produced by the Catholic Mission at Port Leon, Yule Island in 1939. It is in a bound bilingual manuscript in Roro/French by Paolo Coluccia MSC. A photocopy of that work has been in the possession of the linguist since the early 1970s. The linguist was a teacher in Papua in 1964-1966, having completed the 7th E-course in Rabaul in 1964. In 2013 the linguist had an opportunity to visit friends from this language group at Agevairua Station and Hisiu village. Creating an accessible modern work was discussed and tentatively agreed. Voluntary work began in earnest in 2015. Between 2015 and 2019 a mixture of fundraising and language documentation activities occurred with the linguist visiting PNG at her own expense up to 3 times a year. In 2015 a small sample booklet was produced by University of PNG Bookstore. One hundred copies were distributed to advise community people of the intended project and to obtain feedback. Two people gave feedback. However, we are now finding out that the little book is closely guarded and used by the families who have them. On 22 June 2019 the first part of the dictionary was launched at a fundraising function in Brisbane. That first part, Phase 1, includes entries from M to W. With the current financial support from ELDP, Phase 2 will process entries from A to K, thus completing the digitisation of the 1939 Coluccia Dictionary. Approximately 3,000 entries will be entered into the Lexique Pro program, edited, illustrated and audio recordings made. For more detailed information please visit the project web page at www.maeakatohana.org.

Father Paul Guy, Vicar-General of the Bereina Diocese, has given permission for the Church’s original documents to be used for this purpose.

We sincerely thank all those who have been supportive of this project in any way over the years, especially George Akauma (Kivori Kui) and Uni Pinu (Hisiu Village) who started the whole process in 1965, and John Harris (Canberra, Australia) who first drew the linguist’s attention to the Coluccia Roro/French Dictionary.