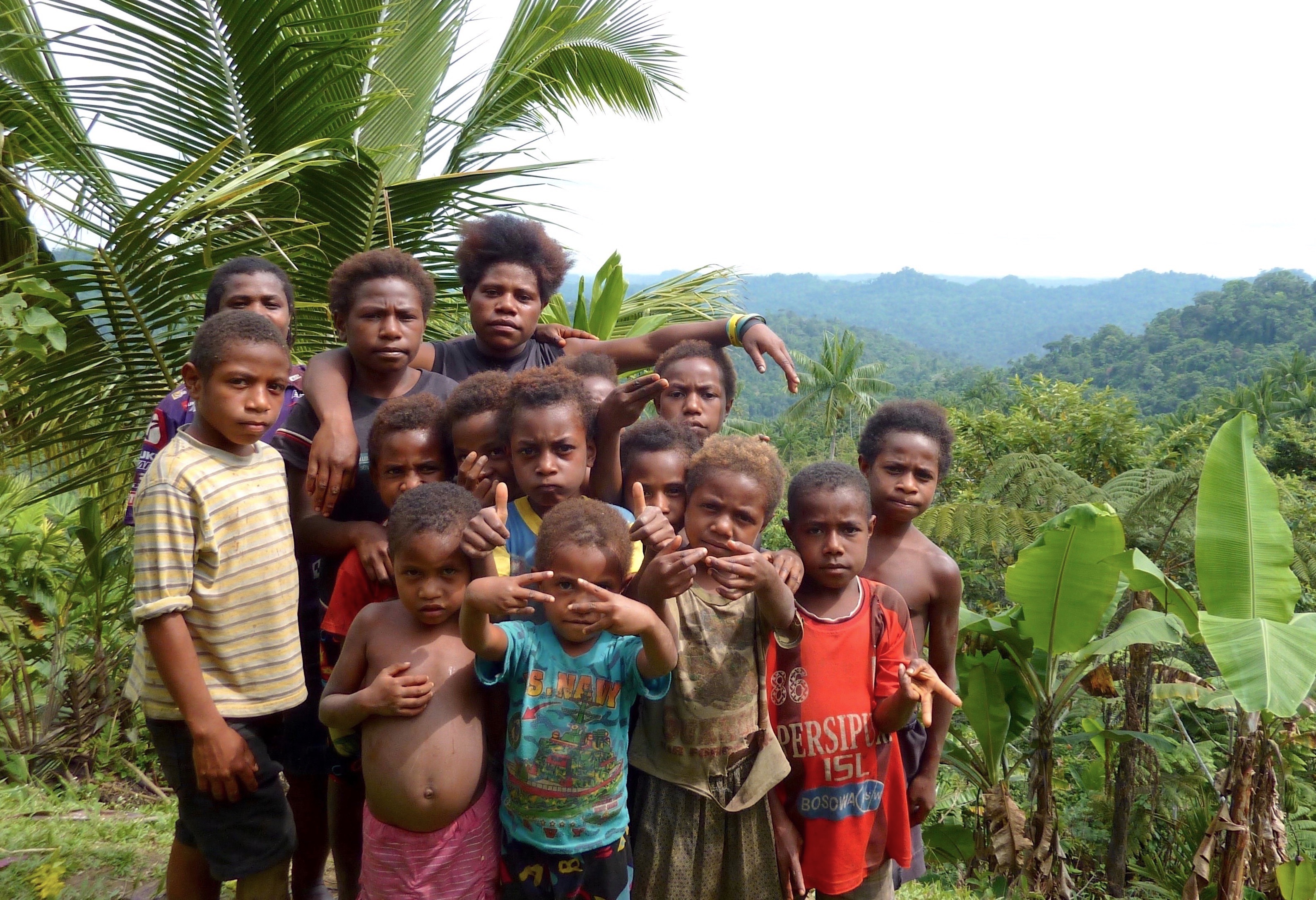 Landing page image for the collection ’Documentation of Aro [tei], A Torricelli language of Papua New Guinea’. Click on image to access collection.

This collection contains a collection of video recordings of narratives, songs, and conversations in the Aro language, accompanied by annotations in ELAN and various other materials produced as part of this documentation project (see the Collection Contents section for details). All of these materials were collected by Andrey Drinfeld, a linguistics PhD student at the State University of New York at Buffalo.

The Aro speaking community lives in nine villages (Selep, Brau, Mup, Fatundu, Kolembi, King, Wisamol, Afua, and Riworip) in the Torricelli Mountains in Sandaun Province of Papua New Guinea. The Torricelli Mountains area, where the Aro people live, has rugged terrain and is mostly covered with thick rain forest. It also stands out as having one of the highest language densities in the world (for example, there are more than ten languages located within a ten kilometer radius from the area where the Aro people live).

Like most other groups in that part of Papua New Guinea, the Aro people mostly rely on subsistence farming. The staple food in the Aro speaking area is sago jelly, which is made out of starch that is obtained from the trunk of a sago palm. In addition to sago palms, the Aro people have also traditionally grown taro, yams, mami (a kind of root vegetable), coconuts, many different species of bananas, sugar cane, and pitpit (a plant related to sugar cane). Aro men used to spend much of their time hunting, but hunting has become less common in recent decades due to decrease in the populations of wildlife in the area.

The Aro people first came into contact with white missionaries at the beginning of the 20th century, and soon after that their culture began to change due to exposure to the outside world. Over the last several decades, the increasing use of Tok Pisin (an English based creole) and intermarriage with neighboring language groups have led to the Aro language (and other languages in the area) becoming endangered. At this point, most people younger than thirty no longer speak the language fluently.

The Aro language is spoken by around 500 speakers across nine villages in the Torricelli Mountains area in Sandaun Province of Papua New Guinea. The general area where the Aro language is spoken has one of the largest language densities in the world, but over the last few decades all the languages in that area have become endangered due to the increasing use of Tok Pisin (the English based creole language of Papua New Guinea).

The Aro language belongs to the Kombio sub-branch of the Kombio-Arapesh branch of the Torricelli family. It has mostly SVO word order (with some instances of SOV order) and mostly isolating morphology. Some of the typologically interesting and/or unusual features of the Aro language are the category of pluractionality on verbs, the use of a verb as a nominal conjunction meaning ‘and’, and the grammaticalization of adverbs of time meaning ‘tomorrow’, ‘yesterday’, ‘later today’, and ‘earlier today’ into tense marking particles.

Ethnologue and some other sources list the Aro language under the name ‘Torricelli’ (for this reason, the ISO code for Aro is tei). This collection mostly avoids using that name, since nobody in the Aro community, or in any of the surrounding communities, actually refers to the language that way. The name for the language used both by the Aro community and by the neighboring language communities is, in fact, ‘Aro’, which also corresponds to the word for ‘no’ in the Aro language (naming languages after their word for ‘no’ is a common practice in that part of Papua New Guinea)

The Aro language has several interesting and/or unusual typological characteristics. These include: the category of pluractionality on verbs; the use of a verb as a nominal conjunction meaning ‘and’; the grammaticalization of adverbs of time meaning ‘tomorrow’, ‘yesterday’, ‘later today’, and ‘earlier today’ into tense marking particles.

From an anthropological perspective, some of the interesting aspects of Aro culture that are reflected in this collection are: the Aro people’s extremely detailed knowledge of patrilineal genealogies (in this collection this is reflected, in particular, in the narrative titled “Genealogy and legends of Welewn clan”, told by Martin Naure); a unique method of building traps for catching small animals (this is reflected in the narrative and demonstration titled “How to make traps for catching small animals”, told by Ignas Nymbut and Joseph Lutmer); a set of complex secret rituals that were traditionally used for various purposes (these are told about in several narratives on secret rituals, recorded with Clement Nymbut, Richard Nymbut, and Benjamin Kalmbop); several methods of counting large numbers that were traditionally used by the Aro people prior to the arrival of white people (these are told about in a narrative titled “Traditional methods of counting”, told by Ignas Nymbut and Benedict Yilaten).

In addition, there is one particular cultural/anthropological trait in Aro storytelling that struck me as being rather unusual (although I am not an expert on anthropology): namely, the fact that speakers sometimes use the 1sg pronoun when referring to their direct patrilineal ancestors. This seems to suggest that Aro people perceive their direct patrilineal ancestors as being an inextricable part of themselves. Instances of this phenomenon in this collection can be found mostly in the recording titled “Genealogy and legends of Welewn clan”, told by Martin Naure.

This collection so far contains the following materials for the Aro language [tei]:

-Around 7 hours of video recordings of narratives, conversations, and songs
-Around 4 hours of annotations in ELAN (which include transcriptions in Aro, translations into English and Tok Pisin, and morphological glossing)
-A description of the orthography used throughout this project
-A FLEx database with a lexicon and around 4 hours of morphological glossings
-Around 6 hours of audio recordings of elicitation sessions
-Around 200 photographs taken during the researcher’s trips to the Aro speaking area.

In addition to materials in the Aro language, this collection also contains one video recording of a narrative in the Mukweym language and one video recording of a narrative in the Orok language, told by a speaker who is equally fluent in Aro, Mukweym, and Orok. Mukweym and Orok are both closely related to Aro and spoken in areas that are geographically adjacent to the Aro speaking area. The level of similarity and mutual intelligibility between Aro, Mukweym, and Orok seems to be roughly comparable to that between Spanish and Portuguese. The Mukweym and Orok languages are not listed in Ethnologue and do not have their own ISO codes due to the fact that they are both subsumed under a supposed larger language called Kombio [xbi]. However, my interviews with people from these areas reveal that Kombio is actually a name given to a geographical area, not an ethnic or linguistic group, and that there are, in fact, multiple related, but clearly distinct languages (Orok and Mukweym being two of them, along with others) that are spoken within that area.

The video and audio recordings in this collection were made during a trip to the Aro speaking area (funded by the Endangered Languages Documentation Programme) in September-November 2019. The photographs were taken over the course of three different trips (made in October-December 2017, July-September 2018, and September-November 2019).

Users of this collection should acknowledge Andrey Drinfeld as the researcher, the Endangered Languages Documentation Programme as the funder, and the Aro contributors (speakers, consultants, etc.) whose names are listed in the metadata of the video or audio recording being used.