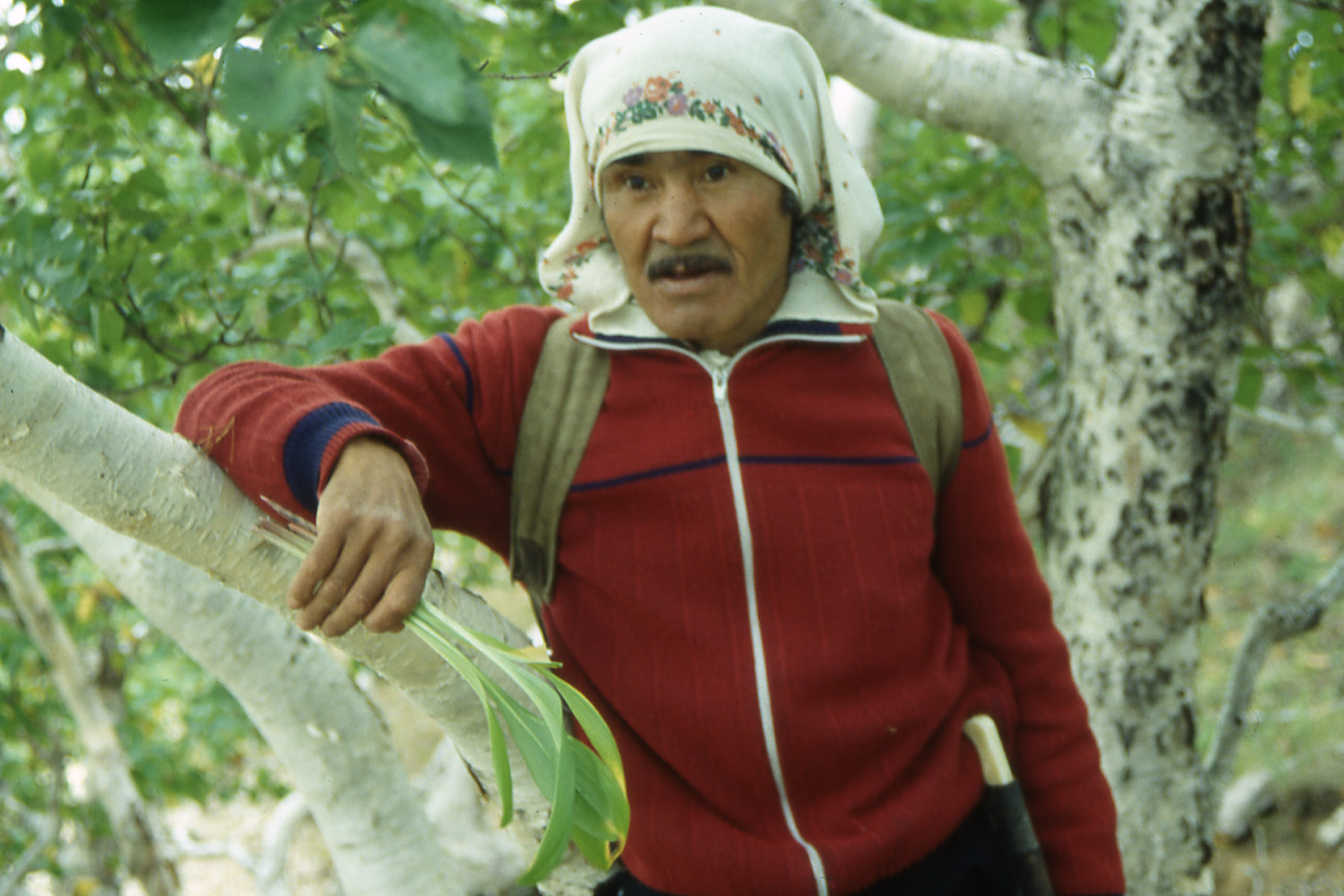 At the time of their first ethnographic description in the mid-18th century by G. W. Steller (https://dh-north.org/publikationen/beschreibung-von-dem-lande-kamtschatka), the Itelmens inhabited the entire central and southern parts of Kamchatka. Due to Russian colonisation and many epidemic diseases most varieties of (Eastern and Southern) Itelmen became extinct and at the beginning of the 20th century, only Western Itelmen remained. They still live along the west coast of the Kamchatka peninsula. Additionally, a great number of Itelmens reside in the cities Petropavlovsk-Kamchatski and Elizovo. Kamchadals, people with a combination of Russian and Itelmen origin, live in the Kamchatka river valley. Fishing, hunting, and gathering have long been the main economic activities of this people, and their traditional life is well-documented in detailed descriptions by German and German-Baltic scientists (https://dh-north.org/digitale-bibliothek/bibliotheca-kamtschatica) who travelled through Kamchatka in the 18th- and 19th-centuries. In the wake of perestroika, a cultural revival took place among many Itelmens. Former rituals and worldviews were revived and staged for the Alkhalalalai (https://dh-north.org/dossiers/das-alchalalalai-fest-der-itelmenen) festival, which is celebrated every autumn to address the reconciliation with nature and express Itelmen identity. In this context, since the end of the 1980s the preservation of Itelmen language has become a particular concern and was strongly promoted even by Itelmen political leaders such as Oleg Zaporotski. During these years, shortcomings of existing Itelmen learning tools became apparent, which prepared the ground for forthcoming fruitful co-productions between Itelmen language expert and school book author Klavdiia Khaloimova, principal investigator Erich Kasten, and linguistic anthropologist Michael Dürr (FU Berlin). For this end, from 1993 to 2000, texts and (spoken) word and phrase lists in Itelmen language had been recorded sporadically by Erich Kasten, while he had to concentrate on other research questions under the given grants. From this language data recorded as an aside, a whole set of learning tools (https://dh-north.org/digitale-bibliothek/languages-and-cultures-of-the-russian-far-east) was produced and provided for local Itelmen community use. The integration of these unique recordings at ELAR will facilitate their long-term preservation and enhance their accessibility to more user groups.

The data of this collection come mostly from the Southern variety (spoken in Kovran, Khariuzovo, Moroshechnoe), but also include material from Northern (Sedanka, Tigil) varieties of Itelmen. In Milkovo and in a number of neighbouring Kamchadal villages in the Kamchatka river valley samples (word lists) of the Kamchadal dialect of Russian had been recorded that once originated partly also from extinct varieties of Itelmen.

Itelmen belongs to the Chukotko-Kamchatkan language family. But the question whether the similarities between Itelmen and Koryak/Aliutor should be explained by genetic relationship or by language contact is still not settled. The Itelmen language must be considered as severely endangered. Currently, there are probably only 3 Itelmen first language speakers left who are around the age of 80 (from two different varieties; the 2010 census gives 82, probably including the no longer fully fluent second language speakers). In the late 1990s, when E. Kasten had made the recordings for the given collection, the number of Itelmen speakers he could work with still numbered less than 20. The data come mostly from the Southern variety (spoken in Kovran, Khariuzovo, Moroshechnoe), but also include material from Northern (Sedanka, Tigil) varieties of Itelmen.

In the beginning, some of the texts had been recorded as audio, whereas others were later taken as video after E. Kasten continued since the late 1990s his language and culture documentation work exclusively on video. While some of the speakers were still fluent in their language, it is obvious that others had to recall their speech with help of written notes. Therefore, the documentation is of particular significance as it reflects a highly endangered language in its most critical stage.

This collection includes about 68 min. of Itelmen texts from some of the last speakers from the west coast of Kamchatka. The seven Itelmen texts of this collection contain remembrances of earlier Itelmen village life on the west coast of Kamchatka, as well as tales and songs. This Itelmen corpus is limited because of the few remaining first language Itelmen speakers who were still alive at the time when most of the recordings had been made, in the late 1990s. Because of the given language situation, most recordings with Itelmens had been made in Russian language. That corpus contains more than 100 hrs. and provides because of its focus on life histories more contextual information that sometimes is also relevant for causes of language endangerment and measures for its preservation. In addition to this, spoken phrases and words from our schoolbook (1997) had been recorded that amount to about one hour. After all these recordings will have been fully processed, they will be added to the given collection, as well as the (spoken) word lists of the Kamchadal dialect.

Each bundle contains a video, ELAN files, and PDF documents with transcriptions and Russian and English translations. For some texts interlinear glossing is already given, for remaining ones this will be submitted later. In this case, there was no need for written consent forms. Because there was a broad verbal consent for the given recordings as the initiative for this true co-production originated from a community meeting in 1993 (see below), and the recorded speakers have been enthusiatic to contribute to it this way. The recordings were taken under the mutual implicit agreement that the materials would be used in the first place for producing Itelmen learning tools – which had been accomplished soon after the recordings. All the materials are openly accessible, without any kind of restrictions, in the online catalogue of the Endangered Languages Archive, ELAR.

The Itelmen language data collection originates with a 1993 project on ethnicity processes, funded by the Deutsche Forschungsgemeinschaft (DFG), which focused on the Itelmens living on the west coast of Kamchatka Peninsula. At the outset of the fieldwork in Kamchatka, a community gathering was held at which the inhabitants of Kovran and other nearby villages expressed the need to conduct specific research to preserve the highly-endangered Itelmen language, and to assess the natural resources of their traditional territory for future sustainable economic development. On both concerns, E. Kasten implemented in the following years additional projects in form of co-productions with local experts as well as with Russian and other international scientists.

With regard to the Itelmen language (https://dh-north.org/dossiers/itelmenische-sprache), a set of Itelmen learning tools (see below) was produced from language data recorded. This project was selected in 2008 for the UNESCO Register of Good Practice in Language Preservation. (https://bolt-dev.dh-north.org/files/dhn-pdf/kasten2009.pdf).The fieldwork for documenting the language was accompanied by a number of workshops in Germany and in Kamchatka in 1997, 1999, 2000, 2008 and 2011 for obtaining and analysing local community feed back and to further optimise learning tools and pedagogical concepts with local educators (https://dh-north.org/dossiers/workshops-und-seminare). Consequently, already from 2000 new digital technologies have been tested and implemented, in combination with still familiar forms of print editions. All this reflects the main aim of this Itelmen language documentation project that has focused from the beginning to provide local community members’ easy access to the recorded data, as only their use – in particular by the local youth – can have an impact to preserve endangered languages and cultural knowledge. This commitment later led to the establishment of the Foundation for Siberian Cultures (2010) (https://dh-north.org/themen/kulturstiftung-sibirien) and more recently to its new web portal Digital Humanities of the North (2019) (https://dh-north.org). This will put into effect new concepts (https://bolt-dev.dh-north.org/files/dhn-pdf/abashiri2018.pdf) of user-friendly access for indigenous communities to such collections.

There are a number of published books and learning tools on the Itelmen language from this project:

More publications on Itelmen language at the Foundation for Siberien Cultures:

The Itelmen project is part of the more comprehensive program towards an open access database of indigenous languages and knowledge that also includes Even, Koryak, and Chukchi collections that will be deposited later also at ELAR.