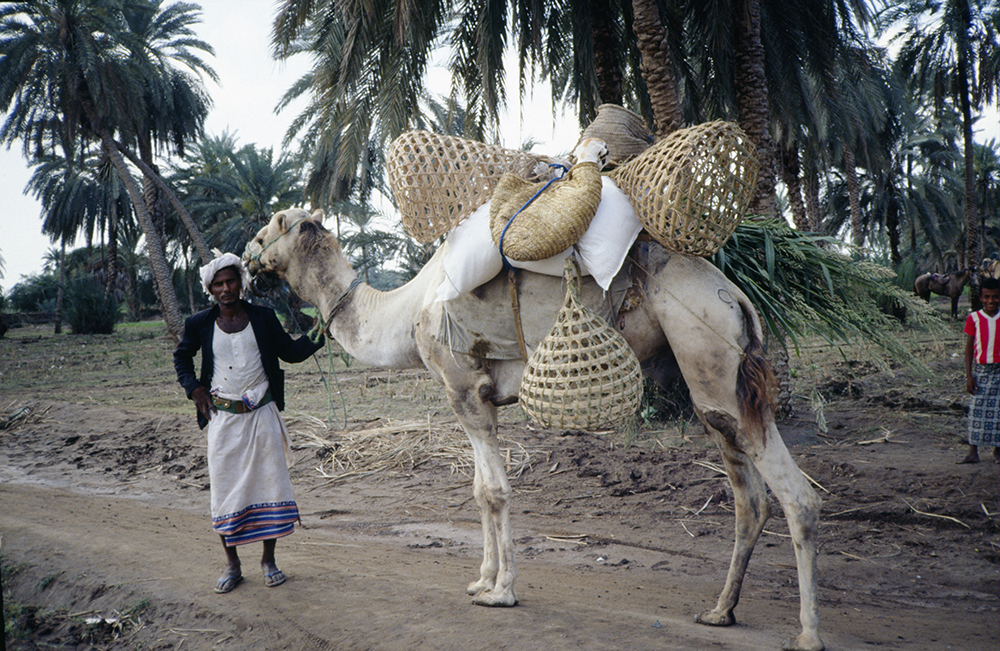 Landing page image for the collection “Recordings of Sanaani and Zabidi Arabic: two Arabic varieties from Yemen“. Click on image to access collection.

The Yemeni archives were recorded by Samia Naïm (CNRS–LaCiTO) through several field missions: in 1984–1996 for Sanaani Arabic; in 1993–1996 for Zabidi Arabic. For both dialects, Naïm’s Yemeni corpus includes:

In the 1980s, the old town of Sanaa was still inhabited mostly by ethnic Sanaani families, while immigrants typically occupied the outlying areas outside the old city, or moved into new neighborhoods. Within this old population, women spoke more conservatively than men because they had less contact with the outside world (Yemeni society being highly segregated). For a whole generation they were illiterate, and thus sheltered from the influence of literary Arabic. In nearly four decades, the population of Sanaa has grown from 80,000 (1970) to more than 1.5 million, following the reunification of Yemen (1990) and the return of more than one million Yemeni expatriates from Saudi Arabia and other countries of the Peninsula, after the Gulf War (1991). This new political and social reality favors and intensifies language contact across Arabic varieties. In the 1980s, girls in school were still able to point out differences between their own varieties and that of their elders; it is unsure whether they can still transmit this knowledge. During her fieldwork, linguist Samia Naïm gave special attention to women’s speech, with many of her informants living in the inner city. Some of the older speakers were attending literacy classes. In order to get as close as possible to their “linguistic” daily life, Naïm recorded radio programs on health, hygiene and education issues, which were specifically intended for them, and which they listened to on a regular basis. The standard Arabic heard there did not seem to present any particular difficulties for them. With the women of the old city, Naïm collected bits of a so-called “secret” speech, a kind of endolect encountered by chance (Naim 2009). As for Zabidi Arabic, Naïm did not focus her investigations on particular groups of speakers. As she stayed with the Hadrami, one of the largest families of Zabid, she was able to collect her essential corpus from men and women of any age of that large family, the youngest ones being educated. Being part of the Hadrami family, she had easy access to their neighborhood and their relatives living in villages around. As for surveys on date palms, they were conducted in Zabid and Swayq palm groves in the Zabid Valley (17 km) and Husayniyyeh (16 km from Zabid).

Yemen is one of the dialectally richest regions of the Arabic-speaking world. There are several reasons for this: its location on the borders of the Arab world, its political and economic isolation from the main lines of communication over the Mediterranean over centuries; as for its rugged physical geography, it does not facilitate internal contacts, but promotes insularity. However, this dialectal wealth remains insufficiently studied.

The dialect of Sanaa is part of the dialect group of the northern highlands.

In his description of the Arabian Peninsula, al-Hamdānī, a 10th century polygraph, dedicates a chapter to the “languages of the inhabitants of the Peninsula”. He shows that the situation around Sanaa (San’a) was more complex than anywhere else, as each district there had its own “language” (li kull buqʕat minhum luɣat). That is also the historical time when another Semitic language spoken in the region, called Himyaritic, went extinct.

Among Arabic dialects, Sanaani may be considered quite conservative. Salient features include: preservation of interdentals, and of the three short vowels of ancient and classical Arabic; voiced realization /g/ of the uvular *q; gender distinction maintained in pronoun forms as well as with Perfect and Imperfect forms of verbs; relative stability of the causative word derivation pattern #4, and preservation of synthetic constructions, for example in the encoding of possession.

That said, this dialect is also subject to external pressures (adstrate, superstrate) that impact the speech of educated speakers. In the 1990s, Egyptian Arabic was still influential in education – through Egyptian-born teachers – and in the media through popular songs and television programmes. In parallel, the Sanaani dialect is increasingly influenced by literary and standard Arabic.

Zabid is a coastal town located in the south-west of Yemen, in the plain along the Red Sea, the Tihama. In the 1990s, Zabid had nearly 54,000 inhabitants. Once flourishing – it was the capital of Yemen from 12th to 15th century – it now attracts the interest of historians and archaeologists, due to its domestic and military architecture. Since 2000, Zabid has been listed as World Heritage in Danger by UNESCO.

The Zabid dialect belongs to the group of Tihama dialects with which it shares features that distinguish it from other Yemeni dialects. Among its most specific features are the replacement of the pharyngeal /ʕ/ by the glottal /ʔ/; ejective, post-velar and velar realisations of uvular *q; the 3sgF /-an/ in Complete aspect; gender distinction in 1sg person, /ana vs. ani/; a complex marking of definiteness; various lexical specificities. In particular, motion verbs keep with temporal subdivisions of the day: they combine spatial meaning with a temporal dimension (Naim & Pilot-Raichoor 2016).

The Yemeni archives were recorded by Samia Naïm (CNRS–LaCiTO) through several field missions: in 1984–1996 for Sanaani Arabic; in 1993–1996 for Zabidi Arabic. For both dialects, Naïm’s Yemeni corpus includes:

The corpus was collected by Samia Naïm during several missions carried out in Sanaa between 1984 and 1997, with men and women of different age, educational level, and social background. It consists of free interviews, fragments of oral literature (stories, riddles, poems, songs) and linguistic questionnaires updated from one mission to another.

It has been largely transcribed, glossed and translated, by S. Naïm herself, and has formed the basis for academic talks, articles, encyclopedia entries.

Some archives illustrating Sanaani Arabic have also been archived online:

Users of the Yemeni collection should acknowledge Samia Naïm from CNRS–LaCiTO as the principal investigator and the data collector. Alexandre François was in charge of coordinating the collection, in the broader framework of LAVAFLoW (Legacy audio video archival in fourteen languages of the world).

The audio recordings were made possible through the financial support of CNRS–LaCiTO. The ELDP funding helped LaCiTO’s research assistant Ms Anne Armand prepare the archive for online display.