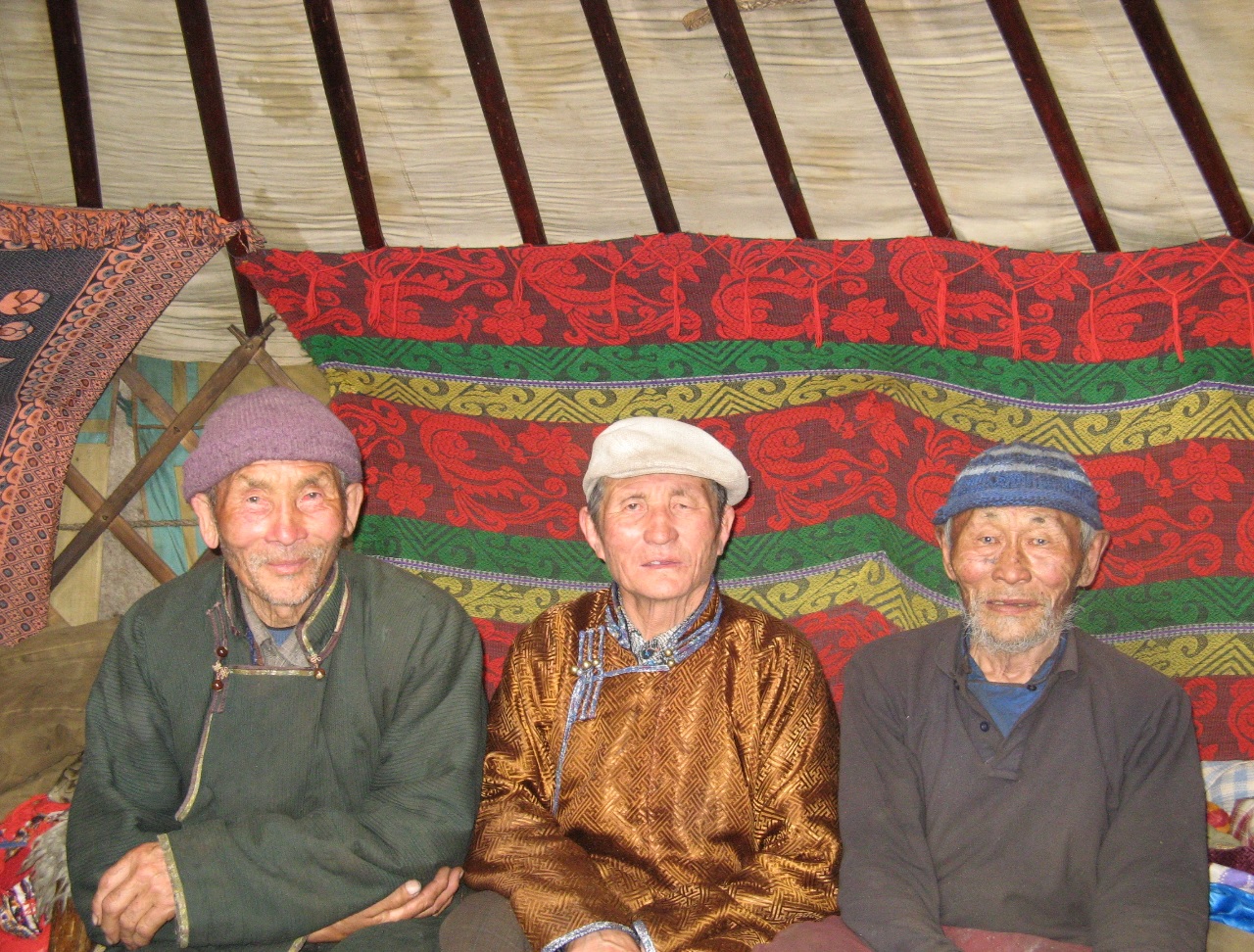 Landing page image for the collection “A preliminary archive of language and cultural material from the Tuhan people of northern Mongolia”. Click on image to access collection.

Tuhan, a Sayan Turkic language, is spoken in the Tsagaan Uur county of East Khovsgol aimag in northern Mongolia. The collection includes an audiovisual corpus of mixed genres with data from the last speakers of Tuhan, collected by Elisabetta Ragagnin and provided with metadata.

The pictures showcased in this collection page show three Tuhan speakers, Dayanjalba, Baasanjav and Gombosurun, in 2014, and Dayanjalba and Elisabetta (the principal investigator) in Tsagaan Uur in 2017.

The collection created within this project focuses on the speakers of Tuhan, a Sayan Turkic variety of East Khövsgöl region in northern Mongolia. In Mongolian sources, Tuhan people and their language are known as Uygar-Uriankhay. Their endonym, however, is Tuha, a variant of tuba/tubo, an ancient ethnic name that is common across Sayan Turkic speakers and various groups in the neighbouring areas. The specific form tuha is shared by the reindeer herding Dukhan of West Khövsgöl and by Tuvans of the Tere-Khöl and Toju areas in Tuva. In Mongolia, Tuhans are also named Üüriyn Uriankhay ‘Uriankhay of the Uur River’, Jinkhene Uriankhay ‘real/true Uriankhay’ and Tuha Uriankhay. Further denominations found in the literature are Soyot or simply Uriankhay. The name Uriankhay —an ancient ethnic denomination used in reference to various ethnic groups and also documented in the Secret History of the Mongols— is also used to refer to three Mongolian-speaking groups of the Tsagaan Uur county. Officially, the total number of Uriankhay in Tsagaan Uur County amounts to 600. Out of the 2400 inhabitants, 650 are registered as Buryat whereas the rest is Khalkha. Nowadays speakers of Tuhan are less than 10, aged between 60 and 83. They are all bilingual in Tuhan and Mongolian. Tuhan is both a non-dominant and a non-written variety and is only used as the in-group language. Tuhan is not transmitted to the younger generations and has never been taught at school. The status of Tuhan is thus very low. It happened to Elisabetta Ragagnin to meet some young Khalkha Mongolian inhabitants of the village who did not even know about the existence of the Tuhan people. In her fieldwork sojourn in September 2017, Elisabetta looked for further Tuhan speakers in Chandaman Undur, Bulnay and Khankh, where other Tuhan-speaking groups used to live. However, she could not find any still alive. As for lifestyle, Tuhans herd Mongolian-style cattle, especially cows, since their pastures are very lush. Tuhans often proudly refer to their homeland as Burhan jurtï ‘God’s homeland’. With regard to the spiritual world, Tuhan beliefs are a combination of Buddhist and animist beliefs. Worth noting in this respect is the special meaning the county of Tsagaan Uur holds both for Buddhism and animism.

Tuhan is a nearly extinct Sayan Turkic language spoken in East Khovsgol region in Northern Mongolia in the county of Tsagaan Uur, at a distance of 185 km from the aimag city Murun. Linguistically, Tuhan is one of the most intriguing Turkic languages of South Siberia. Besides displaying typical Sayan Turkic characteristics, and sharing some specific isoglosses with Tofan, Altai and Khakas, Tuhan preserves archaic features otherwise not documented in the rest of Sayan Turkic. Tuhan also holds a special position within Sayan Turkic regarding Mongolic lexical copies. Some Mongolian loanwords clearly display more archaic features than the rest of Sayan Turkic, pointing to earlier contacts with Mongolic varieties, possibly of Khamnigan Mongolic type. Thus, despite the very small number of its speakers, Tuhan appears to be a highly important language for comparative Turcology and for a better understanding of the language history of South Siberia. See Ragagnin: 2018a, On Old Uyghur traces. In: Gulácsi, Zs. (ed.), Language, Government, and Religion in the World of the Turks: Festschrift for Larry Clark at Seventy-Five (Silk Road Studies 19). Turhout: Brepols. 117-135; 2018b, A Turcological gem: The Tuhan language of Northern Mongolia. Turkic Languages 22/2(2018), 217-229 and 2009, A rediscovered low-land Tofan variety. Turkic Languages 13, 225-245.

This collection includes four hours of audio-video material and eight hours of audio materials of mixed genres including conversations, narratives on history, ethnography and both material and spiritual culture, and elicitation. All data is provided with metadata.

The data for this collection was collected by Elisabetta Ragagnin between 2013 and 2017.