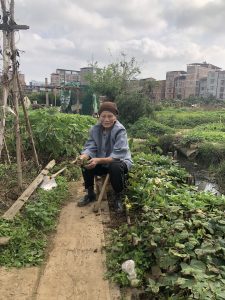 The data was collected by Xiaolan Cao, the principal investigator and a native speaker of Wucun Pinghua, with the support of the village committees of the five villages of Wucun Pinghua and the assistance of the community members, especially village elders.

Besides audio and video recordings of texts, this collection also includes transcriptions, annotations, and translations of selected texts covering a wide range of registers, topics, and speakers. Also included are a phonetic orthography, Wucun Pinghua lexicon with Mandarin and English translations, and pictures of landmarks and important cultural events.

The collection created within this project represents speakers of the Wucun dialect of Southern Pinghua spoken in five villages located in Nanning, Guangxi Zhuang Autonomous Region, China. Most native members of the five villages identify them as Han, the majority ethnic group of China, whereas the rest as Zhuang, one of the stated designated minority ethnic groups of China.

Southern Pinghua is a first order branch of Pinghua, which is, in turn, a minority Sinitic language spoken mostly in Guangxi Zhuang Autonomous Region (Guangxi) in the far South of China. The lexicon and to some extent, the grammar of Pinghua is heavily influenced by Zhuang, a Tai-Kadai language, due to language contact for over a millennium in Guangxi. Within the group of Sinitic languages, the genealogical relationship between Pinghua and Yue is uncertain primarily because they possess similar phonological features and underwent similar phonological developments. While many scholars consider them independent Sinitic languages, many others view them as two branches of the same language.

Wucun Pinghua is an endangered dialect of Southern Pinghua. It is spoken in five inner-city villages located in the city of Nanning, the capital of Guangxi. These five villages used to be situated at the rural-urban boundary but have lost all their farmland due to rapid urbanisation. Whereas the five villages have a native population of approximately 10,000 villagers, it is estimated that only around 3,000 are fluent speakers of Wucun Pinghua. What is even more alarming is that most of these fluent speakers are from the current grandparent generation (age over 55), and most children are not learning and hence do not understand the native community language. The endangerment of Wucun Pinghua is largely due to language shift to Cantonese, the regional dominant language, and to Mandarin, the official language of and educational medium in China. Besides Wucun Pinghua, two other distinguishable Southern Pinghua dialects are spoken in the outer suburbs of Nanning. Although three Southern Pinghua dialects co-exist in the same city, many speakers of Wucun Pinghua report that they do not fully understand the other two dialects spoken at normal conversational speech rate.

As for typological features, similar to most other Sinitic languages, Southern Pinghua is an isolating, analytical tonal language. It has a complex tone system with six tonemes for distinguishing its lexemes. On the other hand, it has relatively simple morphology with compounding being the most common morphological process. As an analytical language, particles plays significant grammatical and pragmatic role, such as markings of TAME and speaker’s attitudes, at the syntax or discourse level.

In terms of word order, within a noun phrase, modifying constituents, including relative clauses and adjectives, come before the head noun.The most common word order of Southern Pinghua is SVO with the subject and the object being optional. However, the word order can to a certain degree flexible when the context allows or calls for it.

This collection will include approximately 15 hours of audio and 5 hours of video recordings of Wucun Pinghua texts.

Users of any part of the collection should acknowledge Xiaolan Cao as the principal investigator, data collector and researcher. Users should also acknowledge the Endangered Languages Documentation Programme as the funder of the project. Individual speakers whose words and/or images are used should be acknowledged by name. Any other contributor who has collected, transcribed or translated the data or was involved in any other way should be acknowledged by name. All information on contributors is available in the metadata.