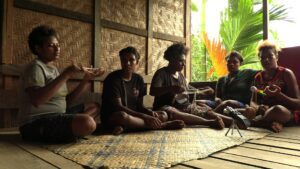 Landing page image for the collection “Documenting Ipiko, an undescribed language of PNG”. Click on image to access collection.

The Ipiko language is spoken in Gulf province, Papua New Guinea. It has two dialects Eva and Ibigo (moribund). the project investigates both phonological and grammatical characteristics of the Ipiko language. Materials should involve the cultural usage of the language according to various naturalistically obtained texts.

Zurab Baratashvili has been collecting the data in collaboration with the Ipiko native speakers.

The collection includes both audio and video materials obtained from 15 consultants with different genders and ages.

The Ipiko Language is spoken in the villages of Ipiko, Pakemba, and Baimuru (Biri Camp), and Naharo (together with Urama people) situated in the Gulf province of Papua New Guinea (with about 500 speakers). The Ipiko language belongs to the Inland Gulf subgroup of the Anim group of the Trans-New Guinea family. Ipiko is the easternmost language of this branch, and is spatially separate from all its relatives, east of the mouth of the Fly River. The mysteries of how it became so separated from other Marind-Anim languages, what enabled it to gain a foothold along the Gulf coast, and what changes it may have undergone as a small enclave surrounded by unrelated languages, cannot be solved until we have detailed data on the language itself.

According to this stage of research, the typological characteristics are as follows: no case marking in the noun phrase; alignment is nominative-accusative (decided with the indexing of arguments in the verb); preclitics indexes or cross-references the A and P arguments (depends on a verb); Suffixes express various temporal and aspectual (including pluractionality) meanings. Their appearance in the verb depends on the compatibility of the morphemes; the verb can have maximally 3 suffixal and 4 preclitical / proclitical morphemes but, for example, the verb “to give” has also the prefixal slot; with some verbs, suppletive expression either agent or patient argument.

About 26 hours of raw audio and 4.5 hours of video recordings.