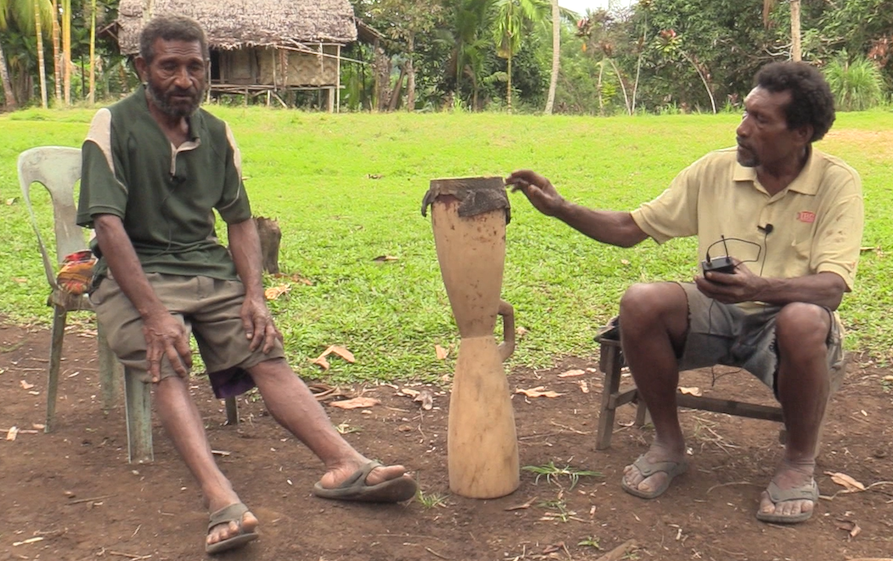 This project documents the linguistic practices of the Gildipasi community in Madang province, Papua New Guinea. Three languages are included in the collection: Waskia, Barem, and Manep. Through recordings of narratives, interviews, group dialogues and bush walks, this project documents two realms of knowledge: tumbuna (ancestor) stories, traditional stories connecting language communities to the landscape, and tumbuna knowledge, traditional practices for living off the land, such as traditional medicine, agriculture, and hunting.

This collection documents the linguistic practices of Gildipasi, an area along the coast of Madang province bordered by the Dibor river to the north, the Gilagil river to the south, and the Simbukanam range to the east. Gildipasi is home to several languages beyond those included in this project, including communities of speakers who have migrated from inland areas in recent years.

This projects documents three indigenous Papuan languages of the community of Gildipasi, Madang Province, Papua New Guinea: Barem, Waskia, and Manep. All three are hypthosized to belong to the Madang branch of Trans-New Guinea.

Barem encompasses several dialects. Qkuan Kambuar, the dialect native to Gildipasi proper, is severely endangered, with only a handful of fluent speakers. The recordings in this collection are of speakers of the Murukanam/Bunabun dialect, who live north of the Dibor river, a short distance outside Gildipasi. Other known dialects are Asumbin, spoken north and inland from Gildipasi, and the now extinct Kimbu Kambuar.

Waskia is spoken in the coastal village of Tokain and on Karkar island. There are many lexical difference between the island and mainland varieties. This project documents the mainland variety of Waskia. For the mainland variety, community members in their thirties and below generally have limited proficiency in Waskia.

Manep is spoken in the villages of Simbukanam and Malas. There are small dialectal differences between the two villages. This collection includes recordings from both villages. Most community members in their thirties and below have limited Manep proficiency.

One focus of the collection is narratives and interviews relating to the cultural practices of Gildipasi. For example, participants discuss the traditions surrounding the construction of signal drums and hand drums, and demonstrate how these instruments are used. Others discuss how traditional costumes are made, or the construction and ceremonies surrounding fishing canoes and larger sea-going canoes. Most of these arts are no longer widely-practiced, and these recordings provide a valuable record of this knowledge.

Another highlight is the telling of local folklore and histories, including jokes, humorous children’s stories, and stories about the wild men (local boogeymen) of the forest. In addition to these lighthearted stories, participants also tell important stories and histories that are central to their culture, but have not been recorded elsewhere.
A third major component of the collection relates to the landscape: the histories of specific places, agricultural practices, and the uses of local plants and animals.

The recordings include narratives and conversations relating to local history and landscape, including family and clan histories, stories of supernatural beings, children’s stories, discussions about local culture and contemporary challenges to Gildipasi society.

Data was collected during the postdoctoral research of Andrew Pick, the principal investigator. All recordings in this collection were collected during July and August of 2019, althought the FLEX databases and annotated texts are also based on data collected during the summers of 2017 and 2018 as well. Recordings from these previous trips can be found in the “Madang Languages” collection at the Kaipuleohone Language Archive at the University of Hawaii.

I wish to thank the people of Gildipasi for inviting me to work with them on their languages, and for their overwhelming hospitality. In particular I wish to thank Mathew Lawun and Yat Paol for spearheading the project and for their invaluable help with introductions and practical arrangments. I also wish to thank John Natu Paol, Andrew Ilom, Paul Lawoi, Collins Kumuang, and Lukas Kumuang for the many exhausting hours they spent transcribing and translating recordings with me, and for helping me to understand their languages. Thank you also to Veronica and Agustin Talim and their children for opening their home to me. Finally many thanks to everyone in Gildipasi who contributed to the project in ways large and small.