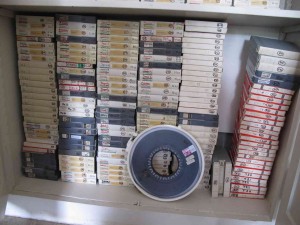 This is a collection of tapes made by various people over time and then deposited with the library at the Divine Word University. They represent at least nine languages of Papua New Guinea and also the German pidgin Unserdeutsch. Some tapes date from the 1960s and are records of local oral tradition.

Part of the collection are recordings made by Fr. John Z’graggen, who was a missionary with the Society of the Divine Word (SVD) in Madang from 1963. His PhD thesis, classificatory and typological studies in the languages of Madang District, was submitted in May 1969. He conducted fieldwork on a number of languages of the region and died in 2013.

The recordings include a large collection in Enga, and in Ogea, Iatmul, Ipili, Kuman, Mawak, Malas, and Tok Pisin, with many in unknown languages (still to be determined). Mawak is a critically endangered language, Ethnologue says there are 25 speakers.

A number of recordings are also in the highly endangered German variety Unserseutsch spoken in Papua New Guinea.

The original tapes date from the 1960s and are language recordings and records of local oral tradition. There are few records of most of the 900 or more languages of PNG so it is important to ensure each recording is playable and findable.

Highlight in this section what you think makes your collection special and interesting. For instance, are there community products that were created out of your documentation data? Are there particular recordings that you would like to emphasize due to their linguistic or socio-cultural importance? See the example below.

Approximately 200 hours of recording in wav and mp3 formats, including a variety of word lists, vocabularies, stories, historical texts and language descriptions.

Part of the collection was made by Fr. John Z’graggen, who was a missionary with the Society of the Divine Word (SVD) in Madang from 1963. His PhD thesis, Classificatory and typological studies in the languages of Madang District, was submitted in May 1969. He conducted fieldwork on a number of languages of the region and died in 2013.

In 2007 Professor Andy Pawley at the ANU put Nick Thieberger in touch with Christian Kaufmann, who had been the curator at the Museum der Kulturen Basel in Switzerland, where Z’graggen’s materials were deposited. These tapes have now been digitised, but some were missing and the only copies are in Madang. The tapes from Madang are the focus of the present deposit and have been brought to Australia as opportunities permitted. The 180 tapes will be returned to the library of the Divine Word University in Madang in addition to being accessioned into the Pacific and Regional Archive for Digital Sources in Endangered Cultures (PARADISEC). We will also send a hard disk of the wav and mp3 files back to Madang for local access. At that point, we would like to employ local people to listen to the collection and to make notes about the content of the files.