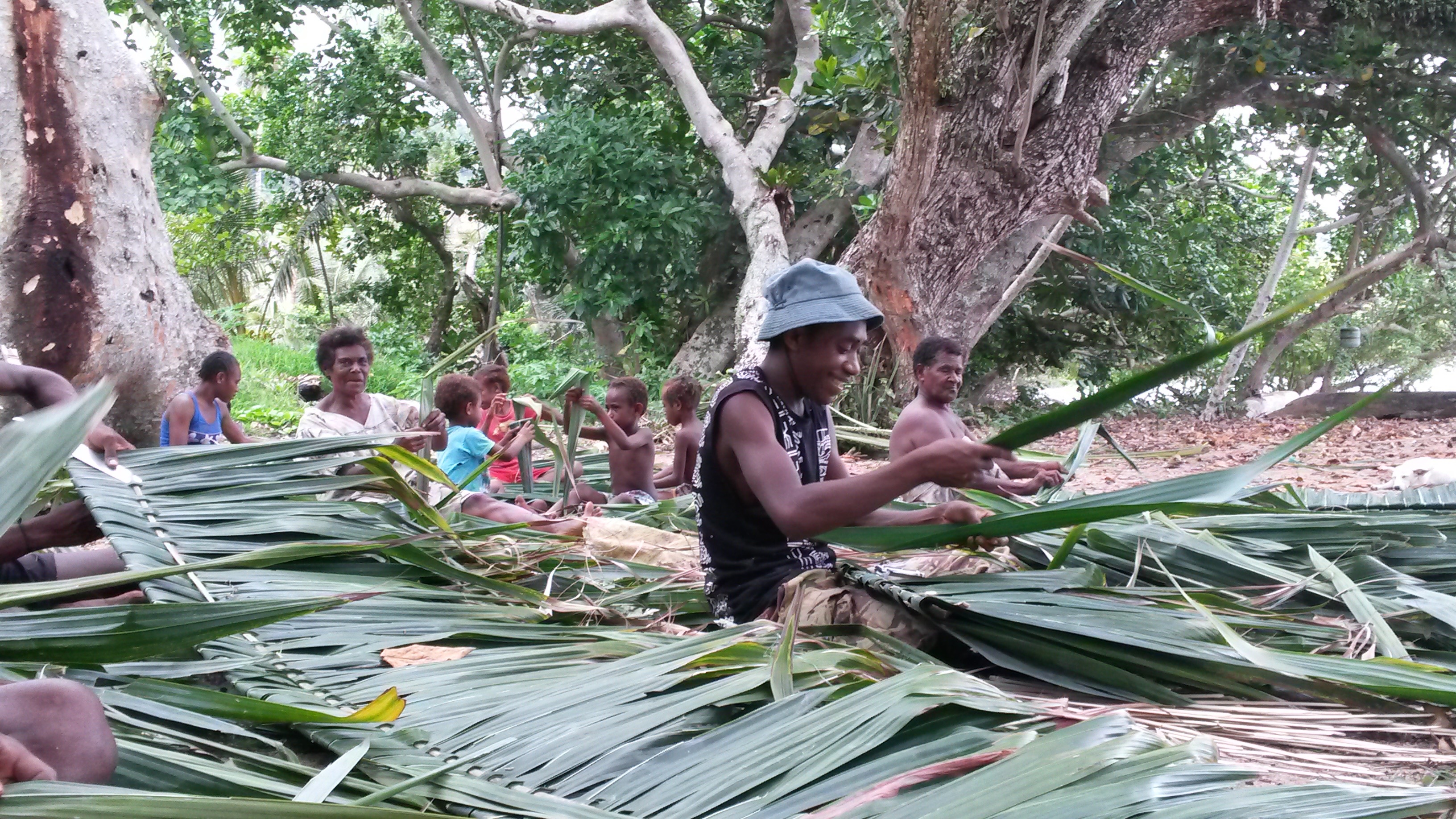 The three main goals of this project are to compose a descriptive grammar of the Banam Bay Language, document the language in order to aid with maintenance and the creation of primary school literacy materials, and lastly to document the negotiation process of creating an orthography and a standard (or variable) literacy system.

To this effect, the collections here include wordlists and grammatical analysis, annotated audio files of oral narratives and recorded Kastom stories, and audiovisual documentation of the orthography creation and language negotiation.

The community of Banam Bay and the surrounding villages are mainly subsistence farmers relying on their family ground and gardens to provide the majority of their needs. Cash crops include copra, cacao and kava and now include surplus produce to be sold in markets to the north in Lakatoro, or to the south in Lamap.

The villages are fairly close and have family clans that stretch through many of the villages. Community gatherings include church related activities, family gatherings, weddings and funerals. “Storying” or telling stories and sharing conversations is a major pastime during food preparation, kava events for the men, or at any of the mentioned events. Stories range from custom beliefs surrounding black magic, to the incorporation of Christianity beliefs, to the expected community gossip and comments about prices for copra, produce markets, gardening and the weather. Currently, more men from the villages are traveling to Australia or New Zealand as a part of the Seasonal Workers Scheme. There are also many young women and men who leave the community for schooling and the possibility of work afterwards, either farther north on the island at Renchare School, or to the port cities of Port Vila or Luganville. Despite the pull of economic opportunities and urban migration, many members of the community retain close ties to the island and often come back home to settle. Many of the speakers have more than one language spoken at home, often learning the language of Banam Bay alongside their other parent’s language if their mother or father has married into the community. Yet, spouses married into the community are expected to learn the Banam Bay language quickly and are usually addressed in this language whether or not they are competent speakers.

Historically it has been related to the researcher that the other neighbouring languages may have come from higher in the bush areas and then settled down to the coast, but the claim is that this language was spoken closer to the coastal hills originating perhaps in the area of Retur and then spreading to Burmbar and Fartavo on either side. This has been a history related mainly by the community members of Retur, therefore more investigation is being done to see if there is agreement or contrast in this language’s origin stories within Fartavo and Burmbar.

The language of Banam Bay is spoken on the southeast coast of Malekula Island in Vanuatu. The location of the language is spread over the coastal villages south of Aulua, which encircle the southern portion of Banam Bay and extend southward including the villages that lie on either side of the main white road and through the villages of Burmbar, ending before Black Sand/Port Sandwich. This area includes the villages of Fartavo, Remev, Tevis, Repaxivir, Hendru, Retur, White Road, Avos, Duin, Wesso Plantation, Wesso, and Burmbar. There are also pockets of speakers in other islands, such as Ambrym, Espritu Santo, and Efate, that maintain this language socially while also operating either in Bislama or the language of their spouse or work environment.

This language was previously classified under the three main language headings of Fartavo, Lepaxivir and Burmbar in Tryon 1976, and later labeled Banam Bay Area language by Crowley and Lynch 2001. Current discussions with the community have considered calling the language Tengen, which is a word meaning ‘of the place’. Most speakers, however, when referring to their language use sur sendrato literally meaning ‘our language’.

The current speaker population is estimated as close to 900 speakers based on census data (Lynch and Crowley 2001). It is considered an endangered language based on its small speaker population and because of the possible competition with more dominant national languages of Bislama, French and English. Despite this, the younger generations are still using Banam Bay as a first language. While the vitality of the language is good, this language has been fairly undocumented, having mainly been recorded through wordlists but without a grammar or extensive documentation resources. The community worries about language loss and they are working to implement the government’s education plan to teach the primary school levels one through three in their own vernacular. This project aids the creation of an orthography and literacy materials along with building a documentation of the language.

The corpus contains custom stories and narratives, as well as personal narratives and histories regarding topics such as a cultural festival, attending a circumcision closing, or morning preparations for a family day event. There are also accounts of procedures, such as preparing a breadfruit dish, etc.

These collections have been recorded and collected by the principle investigator, Brittany Hoback as part of her doctoral thesis research for Victoria University of Wellington along with her partner and native-speaker Jim Brown Masing Luan. The collection is based on research fieldtrips from 2017 to 2019 and a longstanding relationship with the community from 2007 until the present. These collections reflect a working relationship between the researcher, her partner and the community of Banam Bay cooperatively laboring to compile a documentation resource for language maintenance and vernacular literacy.

The primary investigator for this research is Brittany Hoback and acknowledgement should also go to the community of Banam Bay for their work in building the collection. Users should also acknowledge the Endangered Languages Documentation Programme as the funding agency of this project. Individual speakers and translators should be named and acknowledged with use of their contributions. All information of these contributors can be found within the metadata. As collection material becomes finalized, I shall list how to cite this corpus, until that point, please allow me to prepare my collection fully before citing.