Documentation of the Vlashki/Zheyanski language (‘ruo’) 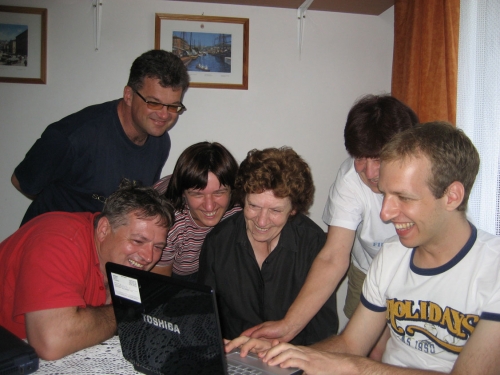 The collection includes most of the audio/video, descriptive and community-oriented material in two dialects of the Vlashki/Zheyanski language that was collected and/or produced between 2007 and 2017. Most of the audio/video recordings consist of narratives, guided conversations and procedural discourse depicting elements of local lifestyle and history. The annotated audio/video corpus represents speech of a wide range of speakers living in Croatia, but also a variety of descriptive, academic and community-oriented materials.

The photograph above on top shows a family from Žejane examining and discussing old photographs from Žejane, collected for the project from different speakers during oral history/life story interviews.

The audio/video recordings represent the speech of fluent and active speakers of the Vlashki/Zheyanski language. They speak either the Vlashki or the Zheyanski dialect as it was spoken in communities in Croatia at the beginning of the 21st century. All speakers are adults and over 40 years of age, but the majority of them are elderly. Also included are two videos of performed speech by children, a play in Vlashki and a music video in Zheyanski.

Vlashki/Zheyanski (ISO 639-3: ruo) is a severely endangered Eastern Romance language, also known under the technical name ‘Istro-Romanian’. As of 2018, it is still spoken in six native villages on the Istrian peninsula in Croatia as well as in several countries abroad. Speakers in Šušnjevica and surrounding villages call their language Vlashki, while those in Žejane, a village further north of Šušnjevica, call it Zheyanski. There is also a significant number of immigrant speakers of the language in the United States and in Australia, as well as in various Western European countries. Today, there remain only some 120 fluent and active speakers of the language in the native villages in Istria. Perhaps three times as many speakers live outside of the villages in nearby towns and cities in Croatia. The total estimated number of speakers may be close to a thousand when speakers living outside of Croatia are added to those living in Croatia. The majority of speakers in Croatia and elsewhere are middle-aged or elderly and inter-generational transmission of the language within families has been largely interrupted and Vlashki/Zheyanski has been replaced in use by Croatian or English.

Vlashki/Zheyanski presents an interesting case of language change under the influence of language contact. It carries marks of contact with dialectal Croatian, and, to a much lesser degree, with other contact languages, such as Italian, on all levels of linguistic structure, from the lexicon and phonology to syntax and morphology.

The deposit contains data from the two dialects of the language, Vlashki and Zheyanski, as indicated in the metadata. It also includes many community-oriented products that have been developed concurrently with and/or as part of the documentation project. The oral history interview collection provides rich ethnographic and historical information related to the period between the late 1930s and the 1940s and the late 20th century. The collection is associated with the community-oriented language website at http://www.vlaski-zejanski.com, in existence since 2010, which could not be made part of the collection at this point, but is active and can be consulted online.

The collection consists of the following:

The project was funded by the following funding bodies:

Users of any part of the collection should acknowledge Zvjezdana Vrzić, Ph.D., as the researcher. Individual speakers whose words and/or images are used should be acknowledged by name. Any other contributor who has collected, transcribed or translated the data or was involved in any other way should be acknowledged by name. All information on different contributors is available in the metadata. Users should also acknowledge the National Science Foundation as the funder of the project along with the other funders indicated above.