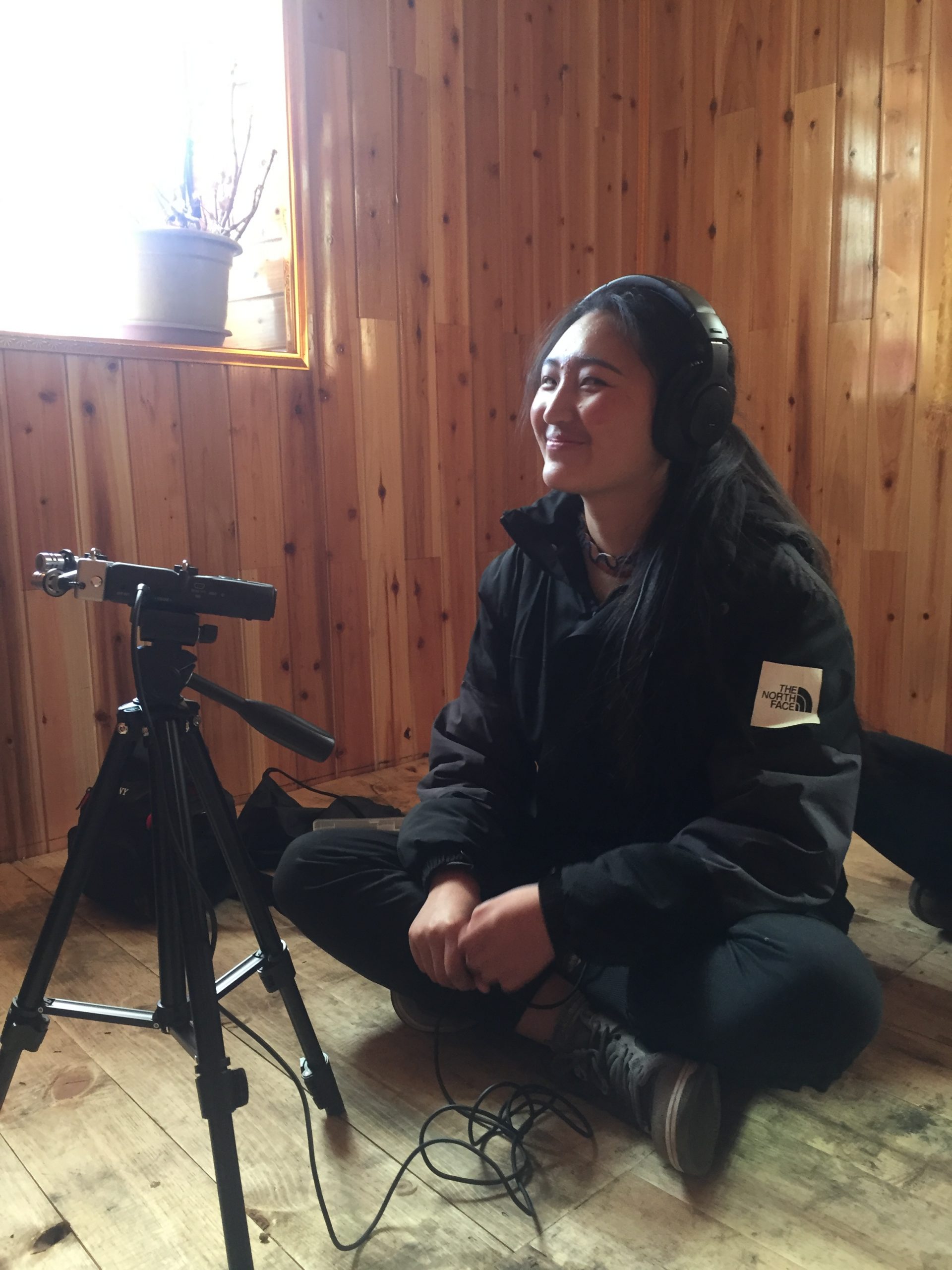 This cross-sectional audio and audio-visual corpora will include rich annotation and translations in Simplified Mandarin, English, and Standard Tibetan orthographies to make data accessible to the Minyag language community and local scholars. Multiple methods of linguistic elicitation give a rich archive of language forms in-use and offer a representative sample of speakers from the various Minyag villages, with preference given to elderly speakers.

Data will be collected by Agnes Conrad, linguist and principal investigator with the help of Tenpa Tenzin and other community members.

This collection includes speakers from a wide range of occupations and age groups. There are few monolingual speakers under the age of 70 and bilingualism is common and differs between age groups, representing shifts in the dominant majority language from Tibetan to Putonghua, which has recently emerged as the language of social mobility because it is necessary for education, state employment, and participation in the burgeoning tourism sector. At the same time, as self- (and state-) identified Tibetans, Minyag speakers’ language attitudes and educational decisions must be understood within the context of pan-Tibetan identity and language movements. Literacy and fluency in Tibetan is increasingly used to express ethnic identity, leading some neighboring communities of Tibetan speakers and some Minyag speakers to view the language unfavourably. Through conversations with elders, the final report of a 2008 language project estimated an 80% decrease in Minyag speakers over the past 40 years. The fact that the oldest living generation perceives a drastic reduction in their speech community indicates the urgency of documentation. The language is still being transmitted to younger generations. However, though speakers under 30 may use or understand Minyag, Tibetan and Mandarin-medium schooling, economic migration to cities and exogamous marriages are increasingly common. These social changes threaten to weaken community ties and decrease the likelihood that parents will pass the language on to their children.

Minyag is a Tibeto-Burman language spoken by about 10,000 minority Tibetans in villages clustered around Gangkar Mountain (CH: Gongga Shan) in Kangding County, western Sichuan, China. The language and its speakers are known in Tibetan texts by this name and in Chinese texts as ‘Muya’. Though the language’s genetic affiliations remain contested, scholars commonly place Minyag in the Qiangic family. While much speculation exists on the genetic origins of the current speaker group, little is known about the origins and history of their language, which has no written form.

While intelligibility between different Minyag-speaking villages is high, Minyag is not intelligible with its neighboring languages which include various dialects of Kham Tibetan, Gyalrong, and Naxi. Bilingualism is common and for this reason Tibetan, Putonghua, and occasionally appear as secondary languages in the data.

This deposit will include natural and elicited conversations, as well as folk stories from six different villages. While these villages do not constitute separate dialects, minor lexical differences do exist and data will be organized according to the village of collection.

This collection will include 40 hours of audio recording and 20 hours of video which will equally represent six different Minyag speaking villages. While the content of the video recordings will be limited to single person narratives, monologues, and retelling of folk stories, audio data will include 28 hours of elicited conversation on topics ranging from village life to thoughts on the future of the Minyag language. The additional 12 hours of audio recording will be spontaneous conversation.

These data will be collected over two periods of time, from July 2018 to October 2019 and from January 2019 to March 2019, during the principal investigator’s (Agnes Conrad) final year of graduate school. Some, but not all of these data will be employed in the production of her Master’s Thesis.

In utilizing parts of this collection, user are requested to acknowledge Agnes Conrad as the principal investigator and unless anonymous, the section in question’s respective transcription assistant. Users should also acknowledge the Endangered Languages Documentation Programme as the funder of the project. Individual speakers whose words and/or images are used should be acknowledged by name. All information on contributors is available in the metadata.