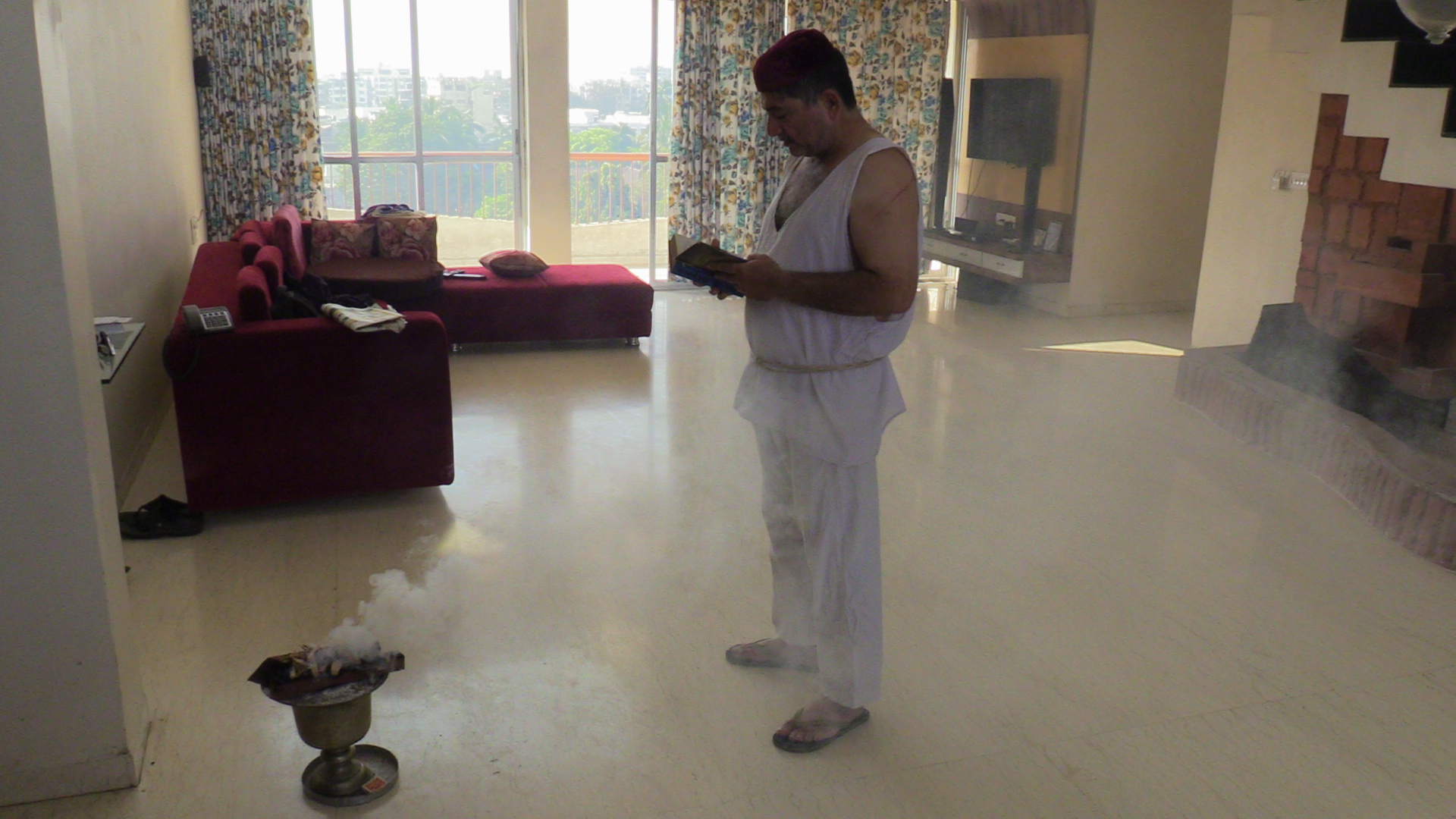 Landing page image for the collection “Videography-based documentation of the language of Parsis in Gujarat and Maharashtra”. Click on image to access collection.

ELDP Project Highlight: Videography-based documentation of the language of Parsis in Gujarat and Maharashtra

The collection contains recordings of the Parsi language is spoken exclusively by the Zoroastrian community living in India, most of whom refer to themselves as Parsis. Another sub-group consisting of the descendants of Iranian Zoroastrians who have been arriving mainly to Bombay (now Mumbai) since the late 19th – early 20th century, are knows as Iranis and predominantly speak a variety of Parsi distinguished by specific syntactic and lexical features.

The materials were gathered across the modern Indian state of Gujarat and Maharashtra by Anton Zykov. The picture at the top features Rohin Kanga doing his morning prayers next to the household ritual fire.

There is yet no solid archaeological evidence of the Parsi arrival date to the Indostan peninsula. Written in 1599 by a priest named Bahman Kay Qobad Sanjana the Persian-language Qesse-ye Sanjan (قصه سنجان) narrates the story of Parsis’ voyage to Western India in sometime between the 8th and 10th CE. Concerning the language spoken that time by the Parsis the Qesse famously describes how a local king Jadi Rana has inquired the Parsis about their religion, customs and traditions. In response he recited an answer in 16 Sanskrit shlokas composed by Aka Adhyaru, which included the following one: The giver of the path of salvation is said (to be) on account of the observances prescribed and brilliantly composed by the ancient teachers (in graceful language), and the giver of heaven on account of the rules composed by their wise men; and the worship of all the three (deities) fire, earth, sun through flowers, etc., is fixed with joyful mind—those are we Parsis. (translated by S.K. Hodiwala (1918) and H.P. Schmidt (1963) The “graceful language” part here refers to the corpus of texts written in Avestan and Middle Persian (also know as Pahlavi), the languages spoken by the Parsis. The reply by Rana in New Persian put forward a set of requirements to the Parsis, one of which was to learn the local (i.e. Indian) language: And next, they must renounce the language of their own native land to gain asylum. They shall give up the language of Irān 155 and speak the language of the land of Hend. (translated by A.Williams) Already in the XVIII many Parsis became prominent writers and poets in the Gujarati language. At the same time the community members were also literate in New Persian, which is proved by the Persian Rivayats, the exchanges of correspondence between the Zoroastrians of India and Iran between 15th and 18th centuries. The Rivayats although written chiefly in New Persian, contain multiple Pahlavi (Middle Persian) parts, notes and quotes. The link with foreign trading companies that arrived to the West coast of India (primarily to Surat) helped the Parsis to learn European languages, chiefly English. Parsis have serves as intermediaries between the Est Indian Companied and other Indian communities, which often predetermined their occupations reflected in their surnames: Mistry (carpenter), Wadia (ship cloth maker) Readymoney (money changer), Engineer, etc. Today athornan (or priestly) schools in the Parsi community train their students in Avestan, Middle Persian and, sometimes, New Persian or top of the Parsi (Parsi Gujarati) language spoken at home. Most of the Parsi households in present-day Mumbai communicate in the mix of English and Parsi Gujarati.

Parsi Gujarati (or Parsi) is a minor vernacular language of a Parsi (Indian Zoroastrian) ethnoreligious community, primarily based in the Western Indian states of Gujarat and Maharashtra. The Parsi community is estimated at 57,264 according to the all-India Census of 2011 (data released in 2014). The number of Parsi speakers can fluctuate between 40 to 45 thousand.

The language is used on a regular basis within the community by an older generation, whereas the youth gradually shifts to English and state-dominated languages, such as Hindi or Standard Gujarati. The Parsi language is inextricably linked with the unique Parsi identity: its culture, religious ceremonies, arts, crafts, professions, oral expressions and folklore.

In Gujarati, the majority of Parsis can also read and write in the language, whereas in Maharashtra and particularly in Mumbai, where 38k Parsis reside, the knowledge and use of Parsi is predominantly oral.

A New Indo-Aryan language closely linked to Standard Gujarati, Parsi is phonetically distinguished by its preference towards dental pronunciation of consonant sounds; loss of nasalisation; more frequent use of a second person singular (as opposed to plural) pronoun; as well as its unique lexicon rooted in a Iranian languages, such as Avestan, Middle Persian and New Persian tied with Zoroastrian religious, literary and epistolary traditions.

Certain background reading on Parsi rituals and customs may be advised from the Iranica online encyclopædia.

Another good source that can accompany the recordings is the “Zoroastrian Rituals in Context” book edited by Michael Stausberg.

…as well the collection on Zoroastrian life in contemporary Iran by Sarah Stewart.

The recordings were collected in various districts (zilās) of Gujarat, namely:

Smaller part of the collection was gathered in the two cities/towns located in the neighbouring state of Maharashtra:

As of May 2019, the collection contains 15 videos of various lifecycle rituals and lifestyle occasions with an overall duration of 5.5 hours. These can be divided into two genres:

The materials were initially gathered in October – December 2018 within the first round of fieldwork for Anton Zykov’s PhD thesis at Inalco (Sorbonne). All the video present in the collected are collected and edited by Anton.

Part of the future recordings is made by the project’s consultant Pinaz Sukheswala, who assisted in the situations of restricted access (for certain ceremonies or places of worship open only for hereditary and initiated community members).

Certain recording on action camera are done by various community members themselves.
Transcriptions (orthographic in Latin script as well as Gujarati in Devnagari script) and translations are done by Anton Zykov and Pinaz Sukheswala.

Users should acknowledge Anton Zykov as the principal author of the collection and ELDP (Endangered Languages Documentation Programme) as the sponsor of the project. Individual speakers should be acknowledged by their names as well as any other contributors mentioned in the description of the respective videos in the provided metadata. Parzor Foundation (Parsi Zoroastrian UNESCO Heritage Project) should be acknowledged in any description of the project as it’s Indian host institution.