Documentation of Ifira-Mele, a Polynesian Outlier of Vanuatu 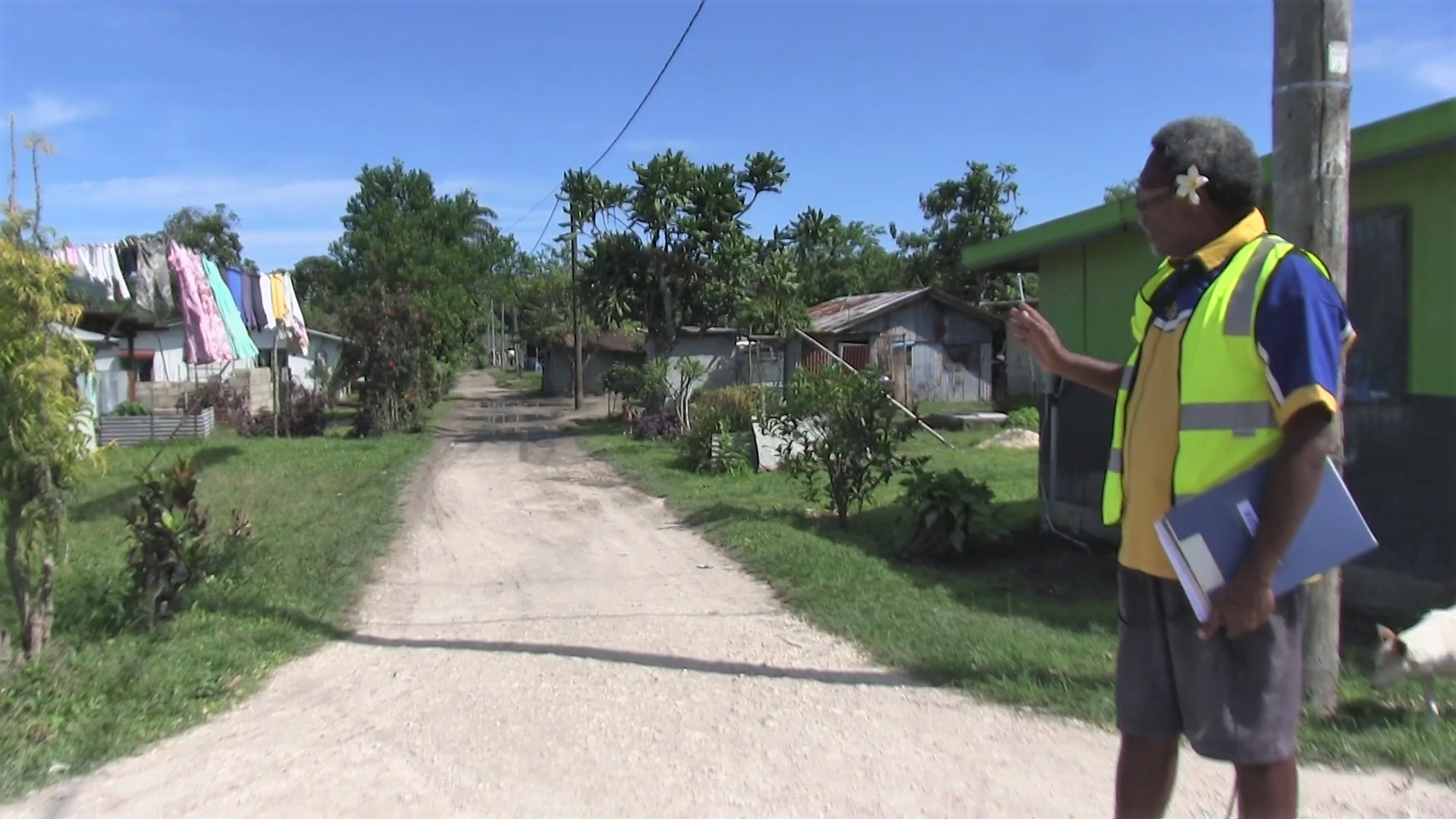 Landing page image for the collection “Documentation of Ifira-Mele, a Polynesian Outlier of Vanuatu”. Click on image to access collection.

Contained in this collection is documentation of the language known in the literature as Ifira-Mele or Mele-Fila. The language is represented by two dialects spoken by what today are two clearly distinct communities. One dialect is spoken on the island of Ifira or Fila (Vila) in Vila Bay, the bay in which Port Vila, the capital of Vanuatu, sits. The other dialect is spoken in the large village of Mele, less than 10km from Port Vila. This language is one of three Polynesian Outlier languages spoken in Vanuatu. Fakamae is also documented as part of the same ELDP funded project (http://hdl.handle.net/2196/a48b2822-5873-4c2e-839a-f8a36725358e). The third Polynesian Outlier of Vanuatu is spoken on the small islands of Futuna and Aniwa in the south of the country. Currently this collection consists of data collected in 2018 during the first field trip for the project. Further data will be recorded and deposited in 2019 and 2020.

Within both dialect communities, there are a combined total of about 3,500 speakers of the language. This number is relatively large compared to many of the approximately 138 languages of Vanuatu. However, the language is threatened due to a number of factors, mostly due to the proximity of the communities to the capital, which means that means that members of the community are in contact with speakers of other languages and use Bislama, the lingua franca, much more often in their daily lives.

All indigenous people of Vanuatu are descended from the Austronesian Lapita people, who settled Vanuatu some 3,000 years ago. The peoples of Mele and Ifira, Emae, and Futuna and Aniwa are distinct from other communities in Vanuatu in that they are descended from groups of people who travelled westwards to Vanuatu after their ancestors had travelled east and settled in Polynesia. This is why the three languages are referred to as Polynesian Outliers, as they are more closely related to and clearly descended from Polynesian languages, and yet are found outside of the Polynesian triangle.

The Ifira-Mele language is represented by two distinct dialects, Ifira or Fila (Vila) and Imere or Mele. The Ifira dialect is spoken on the island of the same name situated within Vila Bay. The Ifira people are the traditional owners of the land on which the capital, Port Vila, stands today. The people of Mele village originally lived on the small island of Imere (a popular tourist spot and marine sanctuary, known today as Hideaway), less than 500m offshore from Efate, in Mele Bay. The tiny island, measuring only about 200m by 125m had become overpopulated, and in 1950 the colonial government ordered that they move off the island and start a new settlement on the mainland. Today the village of Mele is located less than 1km from the island. The people of Mele, under the Mele Trust, still have control over the island and profit from the resort that is located there.

As a community, the people of Mele live a semi-traditional lifestyle. Many people work either in the capital, Port Vila, or in local businesses, such as on Hideaway (Mele) Island. As such many people are using Bislama and either English or French in their day to day life. There is a primary school, Melemaat, located on the edge of the village, the language of instruction of which is English. Most Mele children attend this school or other schools in Vila. There is also a French school, Suango, just outside the village, directly across from Mele Island. Many people from other language groups live within the boundaries of Mele village, either renting or having purchased land. Thus along with Imere language, Bislama, English, French and other Vanuatu languages, are spoken in the village on a daily basis. Due to the long contact with the capital, there has been a lot of loss of language and cultural knowledge. However, there are still many ways in which the people of Mele are engaged in a traditional lifestyle. All Mele villagers, whether they have a paid job or not, make gardens in the land which surrounds the village. Culturally the most important crop is yam, and other staples are greens are planted, such as bananas, manioc, and sweet potatoes. Many men still fish in Mele Bay, although today they use nets from the shore or from aluminium dinghies, rather than fishing from locally carved canoes. The knowledge of carving canoes has been completely lost and any traditional canoes which are used have been purchased from people on other parts of Efate. Likewise, women traditionally made many artefacts, mats and baskets from both pandanus and coconut leaves. Today, much of the knowledge of weaving styles has been forgotten. The people of Mele are very proud of their traditional dish which all people of Vanuatu associate with Mele, grated manioc with seasoned meat inside, baked in a hot stone over in individual serving sizes, wrapped in heliconia leaves.

Ifira-Mele is a language which has undergone and is still undergoing considerable change. Initially there was influence on the language from the other non-Polynesian languages spoken on Efate. More recently changes have been the result of contact with Bislama. Some of the changes which have taken place are observable by comparing data archived here for this project with recordings made in Mele village in the 1970s and 1980s by Ross Clark. Some of the elicited data recorded for this project targets a number of these observable changes.

As of January 2019, at the end of the first year of this project, there are 66 individual ‘bundles’ in this collection. These bundles amount to just over 7 hours of recordings. Each bundle represents a single recording session. Within the collection, there are 12 elicitation sessions, which were recorded in audio only, amounting to 45 minutes of recordings. These are available as a wav audio file. For all other bundles, the session was recorded in video, and within the bundle the recording is available as both an mp4 video file and a wav audio file which has been extracted from the video.

Looking at the collection menu on the left on this page, you will see that you can choose sessions that relate to a particular ‘topic’. You can also find a session according to the participants in the session. Noting my name, Catriona Malau, at the top of this list, I am a participant in all of the sessions, as I am the researcher. A participant can also be someone who recorded the session or a speaker who helped me with transcription and translation of the recording. In all other cases, the participant is the speaker in the recording. If you are looking for recordings on a particular topic or by a particular speaker, you can also use the search box at the top of the page.

If you click on the ‘Bundles and resources’ tab at the top of the page, this gives you a full list of each of the bundles, in alphabetical order according to a brief title of the recording. For each ‘bundle’ or recording session, a description is provided. This description gives a brief explanation of the content of the recording. Importantly, at the end of the description, information is also given about whether the recording was made in video or audio. Also, a short explanation is provided about the level of annotation of the recording. All annotation is presented in an ELAN .eaf file and also a FLEx .flextext file. A small number of texts have not yet been transcribed or translated, in which case no ELAN file is provided, and this is stated in the description. Otherwise, the explanation indicates if the session has been translated into Bislama and/or English, and whether or not the text has yet been glossed. As of June 2019, close to 5 hours of recordings are provided with a transcription and Bislama translation. 4 hours of recordings also have an English translation and have been fully glossed.

When you click on the title of any bundle, you are provided with some more detailed information about the recording, such as the location of the recording, the date and the participants. You are also able to access all files associated with the bundle, the video, audio and annotation files. At this stage, access to the full collection is set at U. What this means is that you need to register for an ELAR account to access the files. Once you have done that and logged in, you will be able to either watch or listen to the recordings online, or download them. For users in Vanuatu, please note that the video files are large and will use a lot of data to download. Please contact me by email at catriona.malau@gmail.com if you would like me to send you a copy of any files.

Users of any part of the collection should acknowledge Catriona Malau as researcher. Users should also acknowledge the Endangered Languages Documentation Programme as the funder of the project. Individual speakers whose words and/or images are used should be acknowledged by name. Any other contributor who has collected, transcribed or translated the data or was involved in any other way should be acknowledged by name. All information on contributors is available in the metadata.

I would like to thank all the people of Mele village who have helped me in many different ways to make this language documentation available. In particular I would like to thank Jimmy Lulu Sopuso, who was my original contact and who has been the main person who has helped me develop further contacts and promoted our work throughout the community. I also thank the chiefs and the community as a whole who agreed to support this important work. I thank all the speakers who shared their words with me so that they can be shared with future generations and with interested archive users throughout the world. In particular I would also like to thank Darren Kalotiti Chillia, Nelly Mansale, Rima Singia and David-Henri Coulon, who worked with me to transcribe and translate the recordings and collect language use data from the community.