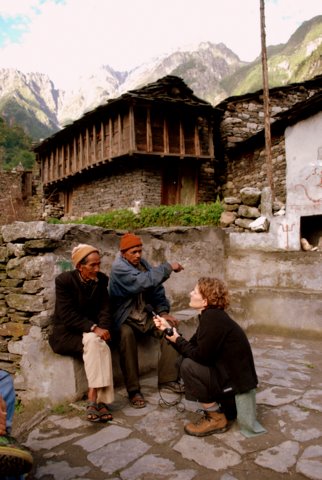 Conceived and initiated in 2001, this project aims to create a lasting record of the Darma language spoken in the easternmost part of the Kumaun region of Uttarakhand, India. Darma has been identified as a ‘threatened’ language, and recent history has resulted in an increased rate of language shift.

The Darma, along with the Byangkho (Byansi) and Bangba (Chaudangsi) comprise the Rung tribe. While speakers frequently refer to Rungboli/Runglo as a single language, each of the three Rung groups has its own language. The Government of India has classified the Rung as a Scheduled Tribe under the broad term Bhotia (‘of Tibet’), a term that refers to various groups who speak Tibeto-Burman languages in the Indian regions bordering Tibet. The Rung reject the term Bhotia; in fact some argue that the people are of Rajput origin. They do not object, however, to being called Shauka by the Kumauni people of Uttarakhand—a moniker meaning ‘moneybags’, which certainly reflects earlier times when the Rung traded with Tibet and had considerable wealth.

The Indo-China border conflict in the early 1960s forced the Rung to halt their trade with Tibet when the Indian Government closed the border. The entire region – including the traditional valleys – became a restricted area. Only the Rung and the numerous branches of Indian military could access the region until the early 1990s. During these 30 years, the Rung began to send their children away to boarding schools (English- and Hindi-medium) so that they could land civil service jobs. This practice resulted in a substantial urban migration that continues today.

Prior to the Indo-Chinese conflict, the Rung made an annual migration to the upper valleys where they kept their traditional homes and agricultural fields. When winter set in, they would return to the Dharchula area and settle in the villages located along the Kali River. The activities in the upper valleys included subsistence agriculture and keeping livestock. During the mild months, the men earned money by trading goods from the Indian markets at a major Tibetan market in Taklakot (Purang). Now that the livelihood of the Rung comes from year-long employment, many families are not able to make the annual migration.

This project emphasizes the day-to-day speech of the Darma. Using a discourse-centered approach to data collection, this project has also relied on methodologies rooted in ethnography, such as participant observation. The goal is to create a record of Darma’s synchronic discursive practices all of which reflect their rich oral literature, historic knowledge, and other ways of speaking.

This project focuses on the Darma, one of three related Tibeto-Burman languages spoken in the Dharchula sub-district of Pithoragargh district in Uttarakhand, India. These three languages are referred to by their speakers as the singular Rungboli/Runglo ‘Rung dialect/language’, which reflects the deep cultural connection amongst the groups. Of the three Rung languages, Darma is often construed to be the ‘oldest’ and ‘most pure’ of the Rung languages.

The traditional summer villages of the Darma are located in the Darma Valley, which is viewed as the homeland of the people. The valley is bifurcated by the Darma River (also known as the Dhauli Ganga). The river meets the Lassar Yangti at the village Tidang—one of the last villages occupied by the Darma—and joins the Kali Ganga at Tawaghat, which is about 22 kilometers east of Dharchula. The Panchachuli massif forms the western border near the villages Dugtu, Dantu, and Saun. Below the traditional valley, above Tawaghat, a portion of the Darma River has been dammed by the National Hydro-electric Power Corporation (NHPC); and additional dams have been proposed up river. Dam projects, along with the ongoing border tensions, have impacted the local employment opportunities and increased the level of contact between the Rung languages and Hindi. This has in turn placed additional pressures on Rung people to shift to Hindi in public domains, which is increasingly seeping into private domains as well.

The Darma report that their language has no significant dialectal variation between the villages, which was confirmed in the analysis. For this project, I made recordings of speakers from nearly every village in the Darma Valley. Most of the recordings in the corpus were made in the winter villages, but in the summers of 2003 and 2010, I visited the summer villages as part of the annual migration. Throughout my field research I worked with consultants from the villages Baun and Sela to transcribe and translate the recordings included in this collection.

The status of Darma as a threatened language is supported by the small number of speakers—fewer than 2,600, the ongoing pressure to shift to Hindi (and English) to ensure economic security, and urban migration, which compounds the pressure to shift away from Darma in all domains of language use.

The classification of the Rung languages – as well as Tibeto-Burman languages throughout Northern India – is not agreed upon. Current classifications place it as a member of the Almora group of the Western Himalayan branch. The relationship between Darma, the other Rung languages, and the now extinct Rangkas have yet to be worked out. Recent scholarship suggests that Darma may be closely related to Zhangzhung. Additionally, recent scholarship has examined the relationship between the purported Almora group and languages in the Kinnauri branch of Western Himalayan. Additional research and analysis will shed light on these questions of classification. It is my hope that the data contained in this collection will contribute to the discussion.

Darma is not a written language and the community is divided on orthography development. Individual speakers use a modified Devanagari script to write poetry and transcribe stories and songs. The data in this collection have been transcribed using a practical orthography based on the International Phonetic Alphabet.

The corpus contains instances of code-switching between Darma and other languages spoken in the Dharchula sub-district, which include the other Rung languages—Byangkho (Byansi, bee) and Bangba (Chaudansi, cdn)—as well as Kumauni, Nepali, Hindi, and (minimally) English.

This collection has been curated from the larger corpus created during the documentation and description of Darma. The collection contains audio files, photos, scans of notebooks, transcriptions of audio files, and a database. The meta-data accompanying this collection offer information to guide the user.

The data for this collection was collected and analyzed by me (Christina Willis Oko) as part of the ongoing Darma Documentation and Description Project, which I initiated in 2001 for my doctoral dissertation research project. I completed my dissertation in 2007 and have continue to work with the Darma on their language. The primary research was conducted during the graduate phase of the project—between 2002 and 2005—with additional data collected during the summer of 2010 and May 2017. The data included in this collection have been curated from the larger corpus and coincide with the data that served as the basis for the grammatical description of the language.

Speakers have participated in the Darma Documentation and Description Project in an effort to create a lasting record of their language for future generations. The stories and conversations included in this collection are not intended for use in contexts other than language development, maintenance, revitalization, or scholarly research. This means that the data in this collection is not to be used in any form of legal action (e.g., litigation, court proceedings, and so forth). Statements made by individual speakers are not binding and may not be truthful (i.e., they may have been made to illustrate a point for linguistic purposes).

The research for the Darma Documenation and Description Project has been funded by Fulbright-IIE, Fulbright-Hays DDRA, the National Science Foundation Dissertation Improvement Grant (BCS 0236475 with Anthony C. Woodbury as PI), the Foundation for Endangered Languages, the University of Texas at Austin, and Rice University. If you use any of the data from this collection or reference the data in this collection, you should acknowledge me (Christina Willis Oko) as the primary investigator, researcher and data collector. Most contributors to the corpus are identified with a pseudonym—included in the metadata—and should be attributed as such.