Documentation for the revitalisation of N|uu 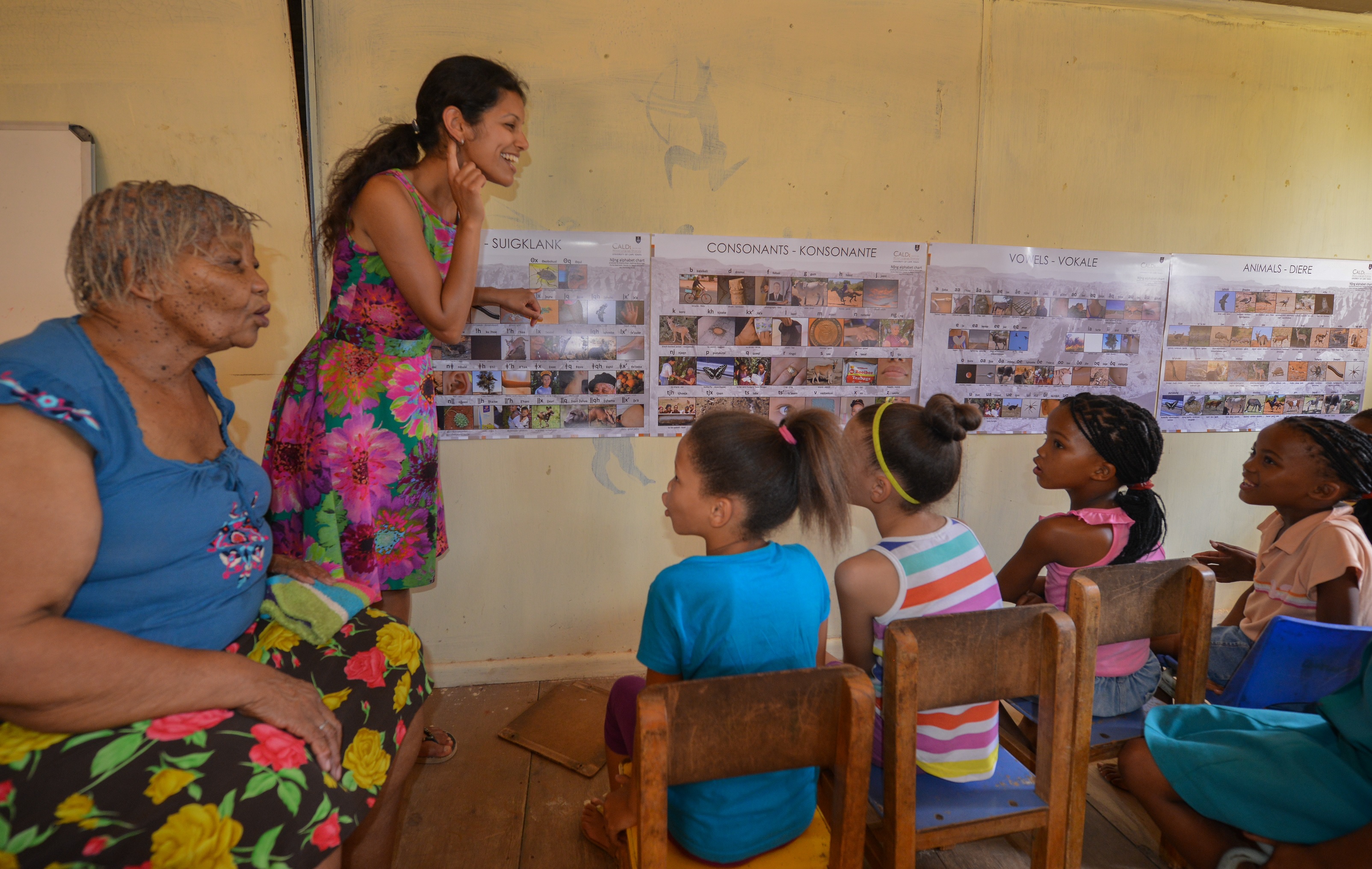 Landing page image for the collection ‘Documentation for the revitalisation of Nǀuu’. Click on image to access collection.

The collection contains audio-video recordings primarily of Katrina Esau, one of the few last speakers of the Nǀuu language. Since 2012, on request by the community, linguists from the Centre for African Language Diversity (CALDi) at the University of Cape Town have been involved in documenting the Nǀuu language for revitalisation purposes, and specifically for producing learning and teaching materials that can be used by Katrina to teach Nǀuu in her school, Staar na die Sterre (‘Gazing at the Stars’).

The collection contains audio recordings of the contents of the 160-page Nǀuu reader which was produced by the CALDi team in collaboration with community members and which is currently in use in Katrina’s school. These include audio recordings (and associated time-aligned transcription files) of the 114 speech sounds of Nǀuu, words, phrases and sentences from everyday conversations, as well as games, prayers and songs.

The collection also contains several video recordings of Katrina and her students, including a video recording in which Katrina gives a linguistic autobiography.

Nǀuu is spoken by only four members of the ǂKhomani community (in April 2018). Until 20 years ago, Nǁng, of which Nǀuu is the last remaining regional variety, was thought to be extinct among expert linguists (Traill 1995). In the late 1990s, about 20 elderly speakers revealed their competence in this language, but since then, all but four have passed away.

Nǀuu is an indigenous click language spoken in the Northern Cape province of South Africa and is the last remaining language of the !Ui language family. Speakers of Nǀuu and the other now extinct !Ui languages, such as ǀXam, ǂUngkue and ǁXegwi, were mainly hunter-gatherers and were once spread across most of today’s South Africa.

On request by ǂKhomani community members, language teaching materials were produced for Katrina’s Nǀuu language school. These materials include illustrated alphabet charts, language posters and an illustrated trilingual (Nǀuu, Afrikaans, English) reader (available as a free download: https://open.uct.ac.za/handle/11427/17432). All materials have been produced by using the Nǀuu community orthography. The collection contains audio and video recordings which emerged from this project.

In the audio recordings, Katrina produces words, phrases and sentences from the Nǀuu reader. The twelve chapters of the reader introduce various semantic fields, such as greetings, body parts, kinship terms, animal names, etc., and also include games, prayers and songs. The glossary contains a list of over 600 Nǀuu terms (together with their Afrikaans and English translations) which are used by Katrina in her language classes.

Three bundles contain the speech sounds of Nǀuu (“Alphabet”), grouped as click consonants, non-click consonants and vowels. Twelve bundles comprise the sound files of each of the individual chapters of the reader. The audio recordings of the individual Nǀuu terms in the glossary can be found in the final bundle. For all audio files, time-aligned transcriptions are provided.

The contents, structure and format of the reader are tailor-made for the community needs in their teaching of Nǀuu. The audio recordings of the chapters and glossary may be used together with the Nǀuu reader (available online, see above).

The data for this collection was collected from 2012-2016 as part of a project undertaken by members of the Centre for African Language Diversity (CALDi) at the University of Cape Town. The two principal investigators of this project were Sheena Shah and Matthias Brenzinger.