Linguistic Description and Comprehensive Documentation of Mewahang, an undescribed Tibeto-Burman language of Nepal 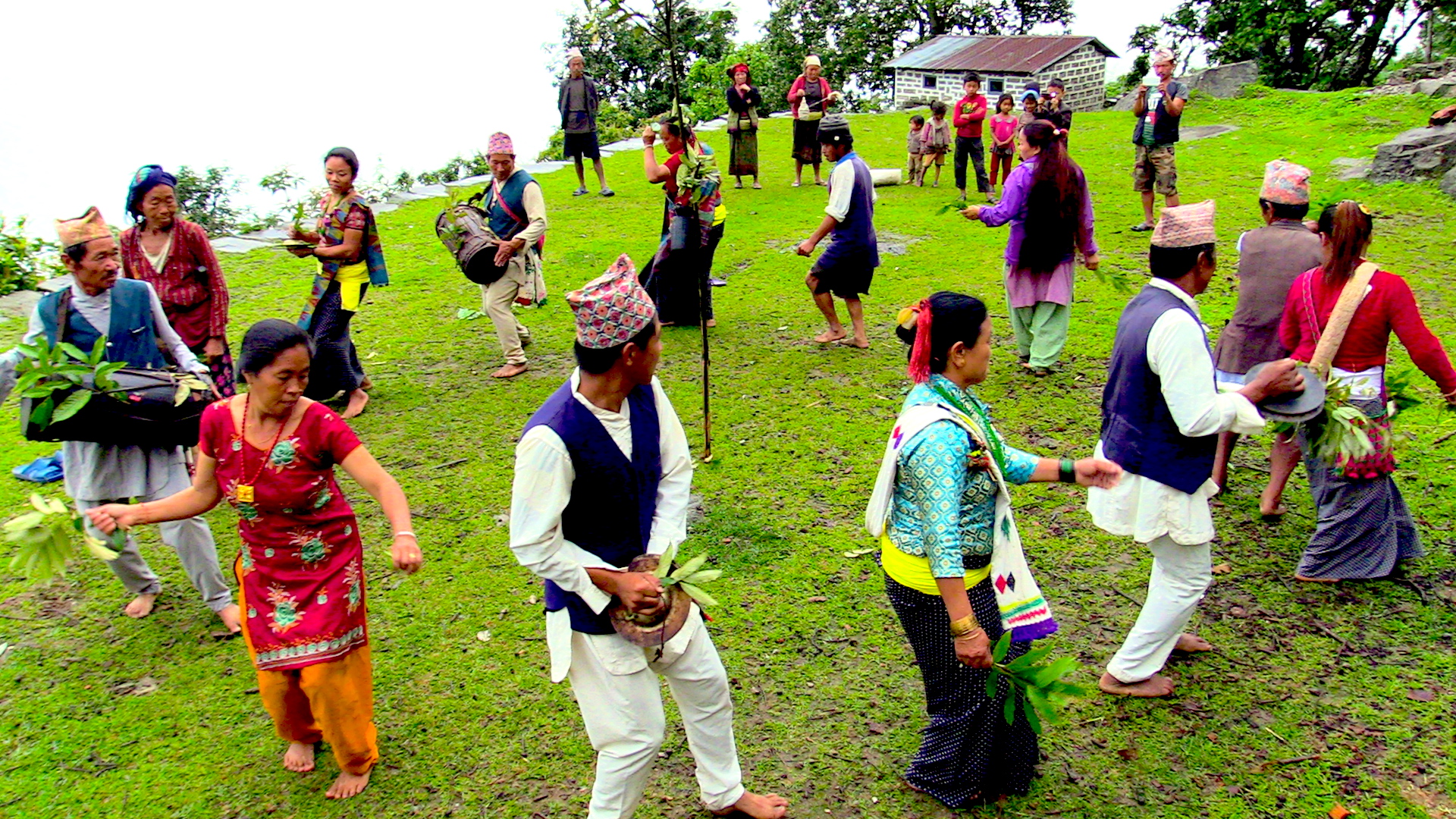 The SILI NACH (Step dance), performed spontaneously by the Mangtewa community in the village of Mangtewa. This cultural dance is popular not noly in Mewahnag community but also in Rai-Kiranti community. Landing page image for the collection “Linguistic Description and Comprehensive Documentation of Mewahang, an undescribed Tibeto-Burman language of Nepal”. Click on image to access collection.

The primary data was collected by Narayan Sharma, linguist and principal investigator, along with the assistance of Namita Rai, Jiten Rai, and Anjana Rai (transcribers of the project), and other community member themselves who contributed for the project.

The collection includes an annotated audio-visual documentation corpus with wide range of about 200 speakers belonging in different gender, education, age etc. It also includes a very unique ritual live performance of GHARCHINTA, along with other important rituals like KHAMANAG and SILI NACH, and wedding.

The picture at the top shows SILI NACH (Step dance), performed spontaneously by the Mangtewa community in the village of Mangtewa.

The collection created within this project focuses on Mewahang speakers of both Balali Dialect and Yaphule Dialect of Sankhuwasabha district of Nepal. Both dialects are considered standard dialects of both Western and Eastern Mewahang. In the Western Mewahang, the dialect is mainly spoken in Bala village and the retention rate is gradually lowered to Chirkhuwa village (50%) then to Yamdang (5%), while in Eastern Mewahang, the Yaphule dialect is mainly spoken in the village of Yaphu, and the retention is lowered to Mangtewa village (50%) and Tamku village (1%). The Mewahang language spoken in Yamdang and Tamku is almost in the verge of extinction. The language will be lost in Yamdang and Yaphu very soon unless there is any promotional programs that help children to speak that language.

Mewahang is an oral Tibeto-Burman language of the Kiranti subgroup (Upper-Arun) spoken by approximately 900 people in the Sankhuwasabha district of eastern Nepal.

The Mewahang spoken areas are surrounded by the neighbouring Kiranti languages: to the west are the Kulung (cf. Tolsma 2006), and their eastern neighbours are the Lohorung (cf. van Driem 2001). The Yamphu are settled to the north of the Mewahang (cf. Rutgers 1998), and to their south are the Sampang (Hanßon 1991).

Mewahang verbs, as Kiranti verbs in general, are characterised by a complex system of agreement where the verbs agree with both Agent (A) and Patient (P) arguments. However, the Mewahang verbal agreement is not always straightforward. Unlike Central Kiranti languages, such as Puma where dative marking is obligatory for animate P arguments and Goal (G) arguments, Mewahang uses consistently an absolutive case for all Patient (P), Theme (T), and Goal (G) arguments. Mewahang appears to be unusual among Kiranti languages in using only a single morpheme for negation, a suffix to express non-past and a prefix to express past tense. Many Kiranti languages possess double or triple negative marking (cf. Sharma 2014).

All bundles in this collection are audio-video recordings. There are about 85 hours of audio-video data, along with about 20 hours of transcribed and translated digital corpus. This total recorded data can further be categorized in the following genres:

The data for this collection was collected during the individual postdoctoral research of Narayan Sharma, the Principal Investigator (PI) of the documentation project of the Mewahang language primarily spoken in Sankhuwasabha district at the eastern part of Nepal. The first set of data was collected during April 2018 primarily in Bala, Chirkhuwa and Yamdang of Silichong Rural Municipality-2 which are the core speaking areas of the Bala dialect of the Mewahnag language.

Some important recordings were collected by the research assistants while the PI was at the host institution, the University of Oregon in the USA and they kept transcribing and translating during this period.