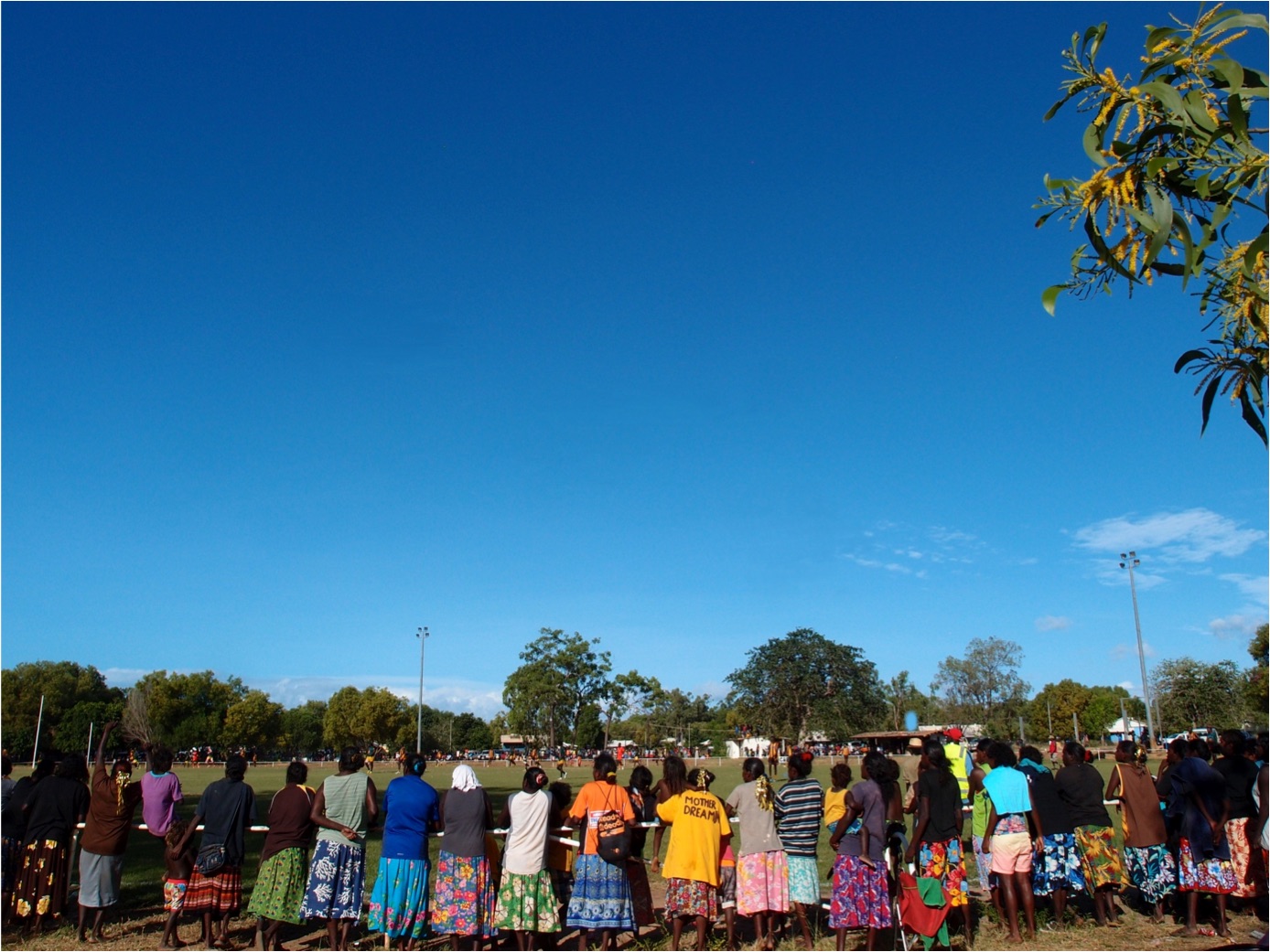 Burarra, a Maningridan language, is spoken in north-central Arnhem Land (northern Australia). The contemporary speaker population are largely based in Maningrida community, but also spend time on traditional land to the east around the Blyth and Cadell Rivers, and in Darwin, the state capital. This collection focuses on speakers of different dialect groups, and features naturalistic language use across a range of genres as well as information about multilingual practices and language ideologies. The collection centres on an annotated audiovisual corpus.

The data was collected by Jill Vaughan (linguist) and Burarra community members.

The picture at the top shows spectators at the Maningrida Football Grand Final.

Formerly, Burarra speakers lived on country from the mouth/western bank of the Blyth River, east to Yinangarnduwa (Cape Stewart), and south beyond the Cadell River. Now many reside in Maningrida (a township further west founded in the late 1950s), and some move between here and Darwin. Fewer speakers live permanently on outstations. The Burarra make up the largest linguistic group in Maningrida and the language now has a large L2 speaker community, functioning in some settings as a kind of lingua franca (although not a fully-fledged communilect). Maningrida is home to speakers and signers of some 15 languages in total. Arnhem Land is a global ‘hotspot’ for linguistic diversity and high levels of individual multilingualism. It is one of the few regions where traditional Indigenous multilingual practices still survive and continue to scaffold the maintenance of many small languages. All Burarra speakers are multilingual and most speak several Indigenous languages. Burarra has around 1000 speakers, and is therefore one of the more vibrant languages spoken in northern Australia. However the features of Burarra are also undergoing rapid change as speakers engage in new social networks and changing life priorities.

Burarra is a non-Pama-Nyungan language of north-central Arnhem Land, in Australia’s Northern Territory. It is most closely related to Gurr-goni, Ndjébbana and Nakkara, and together they make up the Maningridan subgroup of the Arnhem language family. Burarra is a prefixing and classifying language, with a four-way semantically-driven noun classification system, and predicates which take prefixes agreeing in number, person and gender with subject and object. Verbal structures are both polysynthetic and periphrastic, and a system of verb serialisation is used to express temporal, spatial and other aspects of complexity in event structure (Carew 2016; Green 2003). While Burarra is non-Pama-Nyungan, it has long been in contact with Pama-Nyungan (Yolŋu) languages to the east and is thought to show evidence of this. While Burarra has been described as a relatively stable language in the Australian context, this status belies the fact that many aspects of the language and its use are highly endangered, and that the sociolinguistic context of Burarra is currently undergoing significant change.

‘Burarra’ is in fact a designation subsuming four dialect groups – An-barra, Martay, Maringa and Gun-nartpa. While the broader Burarra group counts for some 1000 L1 speakers, much of the linguistic variation that distinguishes these subgroups survives predominantly in older speakers, and in a subset of ‘shibboleth’-like terms that function as strongly indexical socio-territorial identity markers. The dialect labels also continue to be important identity categories, even as differentiation in linguistic practice changes. Documenting this endangered variation is a core part of this project, as only one of these varieties has been previously explicitly targeted for documentation (Gun-nartpa, representing a minority of the Burarra group – see Carew 2016). The An-barra group has been the subject of some anthropological attention (Hamilton 1981; Hiatt 1965; Hiatt and Clunies-Ross 1977; Jones and Meehan 1978; Meehan 1991). Other previous work deals by-and-large with Burarra at the macro level, typically working with Maningrida-based speakers with only minor reference to dialectal variation. The Maringa subgroup associated with the eastern coastal region of the Burarra territory is of particular interest, as almost nothing is known about its linguistic characteristics. Many (although not all) speakers distinguish it as a dialect, and some describe it as a Burarra/Yan-nhangu mix.

The sociolinguistic context of the Burarra-speaking community has undergone considerable transformations in recent decades. Formerly, Burarra speakers lived on country from the mouth/western bank of the Blyth River, east to Yinangarnduwa (Cape Stewart), and south beyond the Cadell River. Now many reside in Maningrida (a township further west founded in the late 1950s), and some move between here and Darwin. Fewer speakers live permanently on outstations. The Burarra make up the largest linguistic group in Maningrida and the language now has a large L2 speaker community, functioning in some settings as a kind of lingua franca (although not a fully-fledged communilect). The evolving nature of the speaker community, alongside dialect-levelling processes in this urban context as formerly more isolated speakers interact on a regular basis, has had important consequences for the shape of the language among younger/town-based speakers, and is a major factor in the endangerment of dialectal variation.

The deposit contains recordings from the project’s data collection in 2018 and 2019. The majority of the collection consists of audio-visual recordings. In total there are 77 hours of video and 19 hours of audio, spread across the following genres:

At present there are approximately 9 hours of Burarra recordings transcribed and translated in ELAN. Transcriptions will continue to be added as they are processed.