Documentation of Fakamae, a Polynesian Outlier of Vanuatu 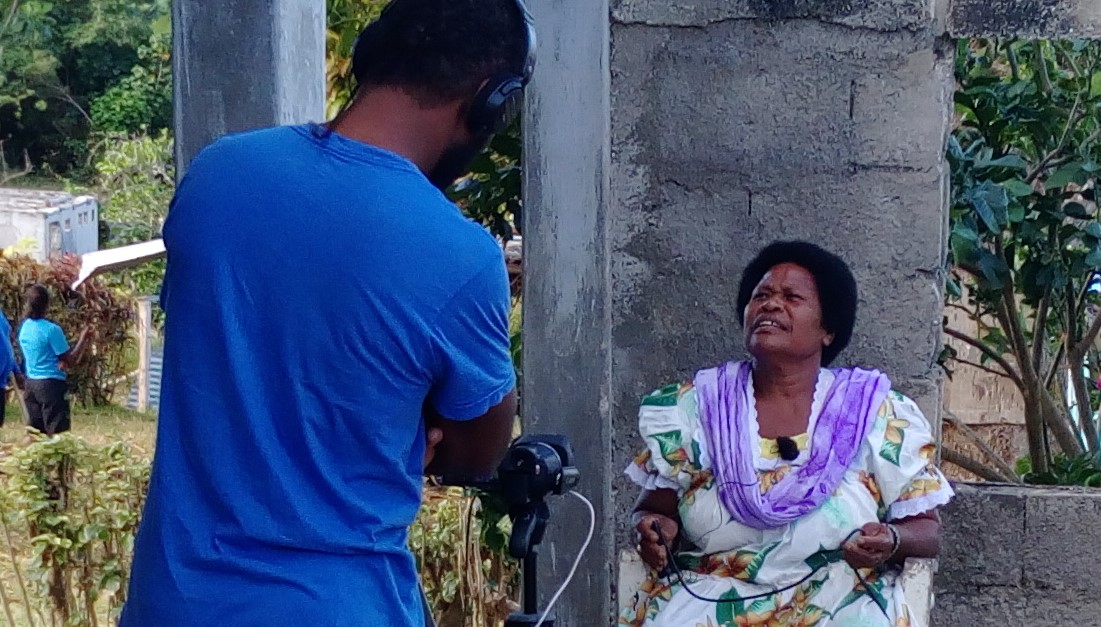 Landing page image for the collection ’Documentation of Fakamae, a Polynesian Outlier of Vanuatu’. The picture shows Leimas Frank telling a story, while Christopher Matariki monitors the recording. The photo was taken in Makatea, Emae. Click on image to access collection.

This collection contains documentation of the language Fakamae, also known in literature as Mae or Emae. The language is spoken in the villages of Makatea and Tongamea, located on the south-western side of the island of Emae, Vanuatu. Fakamae holds a significant position within the approximately 138 languages of Vanuatu, being one of only three Polynesian Outlier languages in the country. Ifira-Mele is also documented as part of the same ELDP funded project (http://hdl.handle.net/2196/c4a5b212-4cf4-4e49-bab1-819ac28ef8d7). The third of these Polynesian Outliers is spoken to the south of the country on the small islands of Futuna and Aniwa. At this stage, the collection consists of data collected in 2018 and 2019 during the first two field trips for the project. Further fieldwork is planned for 2020, and this data will also be recorded and deposited.

There are approximately 200 Fakamae speakers living on Emae, though this number is fluid due to the island’s proximity to Efate, where Port Vila, the capital of Vanuatu, is located. Many Fakamae speakers live on Efate, or neighbouring islands, returning to Emae regularly or rarely depending on circumstances. This proximity to urban communities poses a threat to Fakamae, with the lingua franca of Bislama increasingly spoken as a result. The Vanuatu language of Namakura also poses a threat to Fakamae, as the number of Namakura speakers in traditionally Fakamae areas continues to grow.

The picture at the top shows Leimas Frank telling a story, while Christopher Matariki monitors the recording. It was taken in Makatea, Emae.

The Fakamae, Ifira-Mele and Futuna-Aniwa languages are significant as Polynesian Outliers in that their history is remarkably different from other Vanuatu languages. Vanuatu languages developed as part of the eastward sweep of Austronesian settlement around 3000 years ago. Compared to this, the Polynesian Outliers have a much more recent origin. These languages arrived and developed in Vanuatu sometime in the last thousand years with groups of travelers striking west from their homelands in Polynesia. This means that these Outliers are more closely related to Polynesian languages than to their neighbouring languages in Vanuatu.

It is said that at one time the language of Fakamae was spoken on the entire southern side of the island of Emae, including both the Finonge and Sangava areas. Fakamae is no longer spoken in Sangava; Namakura has taken its place. In the area of Finonge, there are less than a handful of elderly Fakamae speakers. Many of the older generation who are now deceased are remembered to have been fluent Fakamae speakers. Like Sangava, Namakura has become the primary vernacular spoken in Finonge.

A single location in Finonge houses Emae’s two schools: Nofo, for the English stream, and Wororana, for French. These schools teach Classes 1 through to 10. Though the Vanuatu Government promotes the use of vernacular language in the classroom, the fact that there are three vernacular languages on Emae means that none of them are used for instruction at the school. Teaching is undertaken in Bislama, with a gradual transition to either English or French. A number of kindergartens, or preschools, operate on Emae, and one of these is located in Tongamea. Children living in both Tongamea and Makatea attend. Instruction is primarily given in Bislama, in order to facilitate the transition to Class 1, and to accommodate the children who do not speak Fakamae.

Fakamae speakers on Emae live a lifestyle focussed on agriculture and fishing. Subsistence farming is practised by the entire community. Each family tends to multiple vast garden plots and to livestock including goats, cows, pigs and chickens. Many different fruits and vegetables are cultivated, including yam, many varieties of banana, manioc, taro, kumala, and island cabbage. There is little opportunity for paid work on Emae, which means that selling fish, and sometimes vegetables, in Port Vila has become a key source of income for communities. People fish in the ocean using a shared outboard motor boat or practise spear fishing. A reef encircles the southern side of Emae, and people also net, spear and ‘stick’ marine life within the reef. The practice of traditional canoe making is still alive within the Fakamae community, and these canoes are also used for fishing. The tradition of weaving is also strong within the Fakamae community, though traditional methods of pigmentation are no longer practised. Pandanus and coconut leaf are used to weave a range of objects, including mats, fans, baskets, and toys. These are used within the community, and are also sold in Port Vila. Coconut leaf is also woven and used for building construction, along with Natangura for roofing.

A Polynesian Outlier spoken on the island of Fakamae, Vanuatu

The language of Fakamae has undergone much change as a result of language contact. The neighbouring vernaculars of Nakanamanga and Namakura have both had a significant impact on the language in the past, with Namakura continuing to impact the language today. Increasingly, Bislama can also be seen to be making an impact on the Fakamae language. Ross Clark described some of these changes as a result of language contact in a number of articles in the 1980s-90s, following a period of fieldwork on Emae in the 1980’s. It is expected that further changes will be observable through analysis of this corpus.

As of February 2021, at the end of the third year of this project, there are 176 individual ‘bundles’ in this collection. These bundles amount to approximately 40 hours of recordings. Each bundle represents a single recording session. Within the collection, there are 24 elicitation sessions, which were recorded in audio only, amounting to 21 hours of recordings. These are available as wav audio files. One bundle does not contain audio or video recordings, but a collection of photographs of plant life on Emae, with a PDF document containing corresponding information on the species pictured. There are over 170 images in this bundle. The remaining bundles are recorded in either audio or video. These recordings are available in mp4 video where possible, and/or wav audio. These bundles also contain annotations in the form of an ELAN file, where transcriptions and translations of the recording can be found. Approximately five hours of these recordings have been translated into Bislama and English, with the remainder translated into Bislama only at this stage. Over three hours of these recordings have been glossed at this stage. Glossing is ongoing, and these annotations will continue to be added over time, along with English translations where needed.

Looking at the collection menu on the left on this page, you will see that you can choose sessions that relate to a particular ‘genre’ or ‘topic’. You can also find a session according to the participants in the session. A participant can be a speaker in the recording, or someone who helped me with transcription and translation of the recording. A participant can also be a musician, or someone who helped to make a recording. I am a participant in each recording, as I am a researcher and the person archiving these recordings. If you are looking for recordings on a particular topic or by a particular speaker, you can also use the search box at the top of the page.

When you click on the title of any bundle, you are provided with some more detailed information about the recording, such as the location of the recording, the date and the participants. You are also able to access all files associated with the bundle, the video, audio and annotation files. At this stage, access to the full collection is set at S. This means that you will need to first register as a user, and then seek permission to view a file. You can register as a new user in the top right hand corner of this website. In future the access settings for this collection will be less restricted, pending the completion of my PhD dissertation. For users in Vanuatu, please note that the video files are large and will use a lot of data to download. Please contact me by email at amy.e.dewar@uon.edu.au if you would like me to send you a copy of any files.

Users of any part of the collection should acknowledge Amy Dewar as researcher. Users should also acknowledge the Endangered Languages Documentation Programme as the funder of the project. Individual speakers whose words and/or images are used should be acknowledged by name. Any other contributor who has collected, transcribed or translated the data or was involved in any other way should be acknowledged by name. All information on contributors is available in the metadata.

I would like to extend my heartfelt thanks to the Fakamae community, both physical and virtual, for their help in making this language documentation available. Thank you to the chiefs and communities of Tongamea and Makatea, who gave their support to this important work. Thank you to each speaker who shared their words and knowledge with me, and allowed these to be archived for future generations. Thank you to the wonderful team of consultants who worked with me, and at times independently of me, to transcribe and translate these many recordings. I would particularly like to thank Willie Kalo Jacob, who was my initial contact, and who has worked with the project in each of its phases: promoting it within the community, helping to develop contacts, and training to independently transcribe and translate a large number of these recordings. I would also like to thank Lifan Nisor, Leiaka Roy, Matitonga and Helen Alick, Leipakoa Peter, and Daniel Matariki, for their knowledge and time on this documentation project.