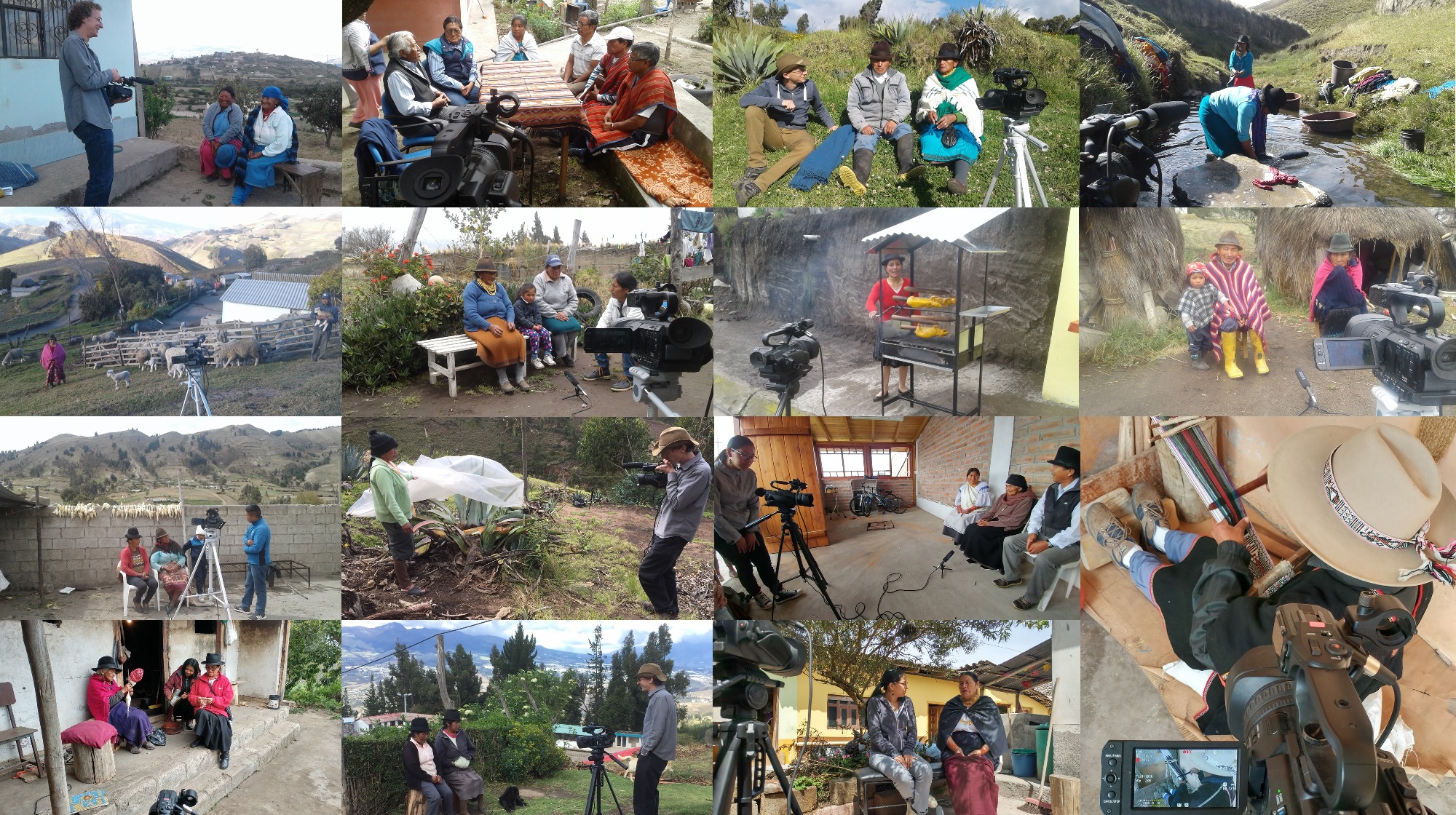 Landing page image for the collection “Urgent video documentation of Ecuadorian Highland Quichua (a Quechuan language): focus on regions of of imminent language shift”. Click on image to access collection.

This collection is a survey of Ecuadorian Highland Quichua varieties including many different dialects, some highly endangered, and featuring interviews, conversations, procedural demonstrations, narratives, and elicitation sessions covering a wide range of themes. The purpose of the collection is to document local phonological, lexical and morphosyntactic features while also including socio-cultural information.

This collection is being created with speakers of several related dialects of Highland Ecuadorian Quichua. Focus is on Pichincha Province including bordering areas of Imbabura and Cotopaxi. Generally thought of as “northern” and “central” dialect areas, Pichincha actually represents the transition from the northern Imbabura to the central Cotpaxi, and has features of both areas. Since the capital city of Quito is in Pichincha Province, the communities are being encroached on by urbanization to greater or lesser degrees. This is coupled with an extreme degree of language shift.

Ecuadorian Highland Quichua, commonly written as “Kichwa”, is a Quechuan language spoken throughout the Ecuadorian Andes from the province of Imbabura in the north to the province of Loja in the south. It has many diverse dialects, some of which are highly endangered. These local forms of “Quichua” developed after the Incas introduced a Quechuan language in the 15th Century, which was adopted by the Spanish colonial lingua franca in the 16th Century.

Related to the Quechuan languages of Peru and other Andean countries, the spread of the Quechuan language family to the area that would become modern Ecuador is associated with the expansion of the Inca Empire. After the Spanish conquest the local Quechuan variety continued to develop into distinct regional language with unique features, no longer intelligible with Inca or Cuzco Quechua, and featuring distinct local dialects throughout the Ecuadorian Andes, spoken by a many different regional ethnic groups. Like the other Quechuan languages and western South American languages more generally, Ecuadorian Highland Kichwa is an agglutinative, SOV language with rich morphology, a medium-sized phoneme inventory.

Despite the historically large number of speakers (current estimates are imprecise but are in the hundreds of thousands), speakers of Ecuadorian Highland Quichua are relatively nearby to cities with predominantly Spanish speaking populations, and the language is under intensive pressure from language shift to Spanish. Today the language is spoken in indigenous Andean communities from Imbabura in the north to Saraguro in the south, with areas around large cities like Quito and Cuenca suffering extreme language endangerment, while in some other areas young people still use the language. Currently in most regions the majority of young people are only passive users of the language, meaning that in most cases it will not be transmitted to the next generation. In relation to this sociolinguistic dynamic, varieties of Ecuadorian Spanish are also used in the local village and household contexts.

This collection includes over 70 recordings from over 30 communities documenting five different regional dialect areas and many local micro-dialects. Most recordings are in an ethnographic interview format, and some involve procedural demonstrations of traditional activities, traditional stories, and linguistic elicitation. In total, there are over 45 hours of recordings as well as corresponding audio files. There are transcriptions in ELAN for 20 of the bundles.

Despite being a relatively large language, there has never been a large-scale modern documentation project on Ecuadorian Highland Quichua, and its extreme dialect diversity was relatively unknown. Now that this project has surveyed the region, the diversity turns out to be much more than was previously known. Especially important is the documentation of the Quichua of the Quito area and of Saraguro, both highly distinct varieties which have never been studied linguistically before, and which are highly endangered.

The materials in this collection have been gathered and prepared since 2018 as part of the ELDP-funded major Documentation Project awarded to Simeon Floyd (Principal Investigator). The research is ongoing and more transcriptions are in preparation.

All private, for-profit usage of materials is prohibited. Legitimate educational, social, or research usages are permitted.

Thanks to all participants in the recordings for transmitting your language. Thanks to the transcription team.

Usage of materials should include acknowledgment of researcher Simeon Floyd as well as the specific communities/speakers represented, as listed in the metadata, as well as ELDP.