Linguistic and ethnographic documentation of Western dialects of Nyenkha spoken in Phobjikha valley in Wangduephodrang, Bhutan 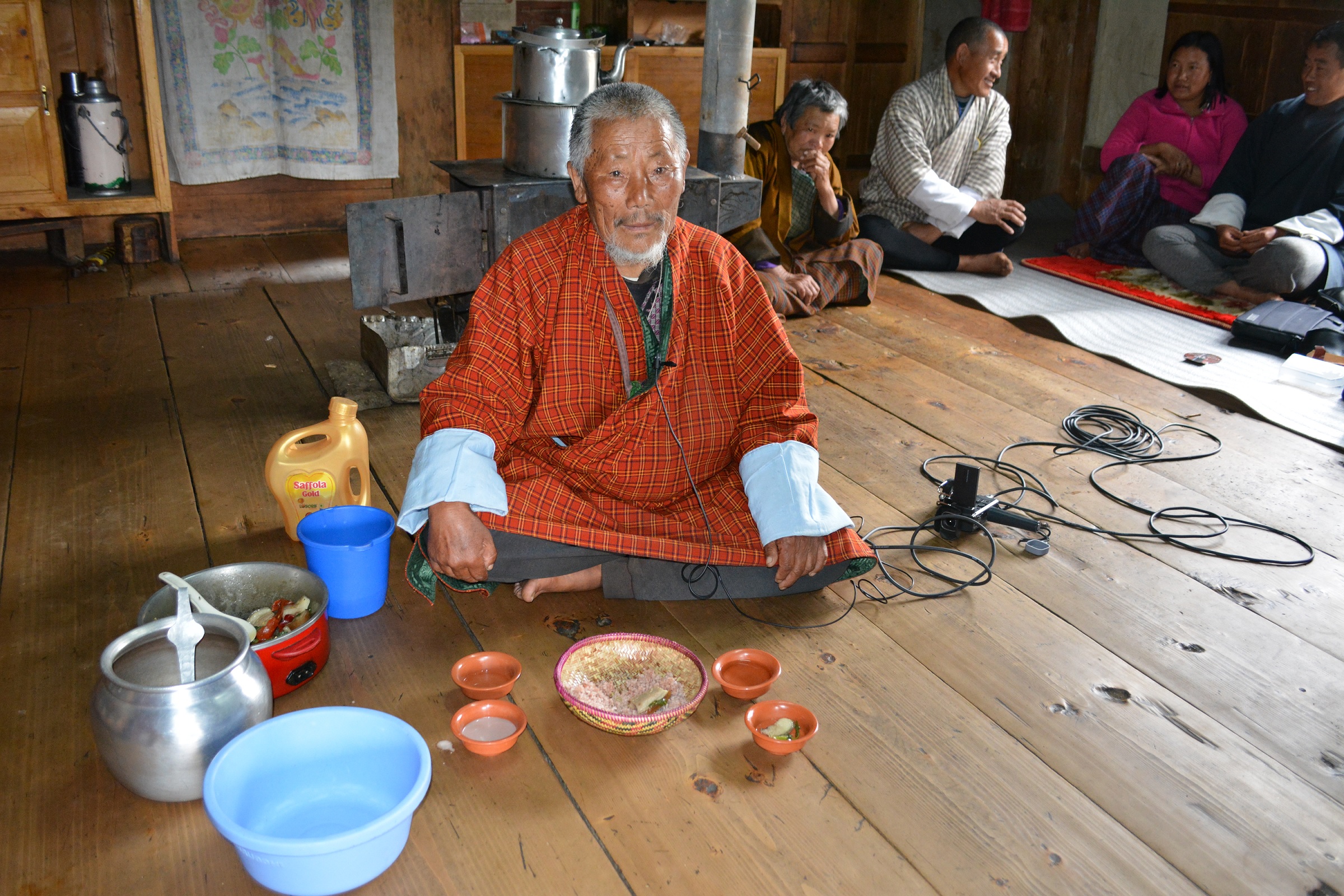 Landing page image for the collection “Linguistic and ethnographic documentation of Western dialects of Nyenkha spoken in Phobjikha valley in Wangduephodrang, Bhutan”. Click on image to access collection.

Nyenkha is a nearly extinct East Bodish dialect spoken at Phobjikha (less than 300 people) and Wangduephodrang (less than 3000), Western Bhutan by an illiterate minority without national participation. Elderly people speak and understand well; middle-aged have limited competence, children neither speak nor understand Nyenkha due to its lack of value in marketplace and official settings. Documentation includes linguistic and ethno-cultural database, audio/video/photographic records of conversation, interviews, oral literature/folk genres, leading to grammatical sketches and an initial dictionary fragment. Generated archival data will facilitate future maintenance and revitalization efforts, and provide evidence for understanding local language and identity in both historical and structural dimensions. This collection of Nyenkha language includes an annotated corpus of audio data, an elementary trilingual dictionary like A Nyenkha-Dzongkha-English Elementary Dictionary, photos narratives, conversations, descriptions of traditions and material culture and songs, and other important sociocultural practices. For example, oral literature and traditional religious ceremonies, ritual practices (Buddhism and Bonism), and taboos, including storytelling and invoking local deities(Lhaboed ‘calling gods and goddesses’), prayers for prosperity in villages, songs about wine and its processing, accompanied by house to house visits throughout the night begging locally brewed wine in each household. In addition, The research team succeeded in recording, documenting, annotating, transcribing, translating (into Dzongkha and English) and archiving a number of bundles, containing a number of important traditional procedural narratives: such as traditional songs, weaving cloths and other bamboo items, traditional local brewing and drinking sessions, making traditional noodles (Puta) offering to dead souls and mush more.

The collection of this language documented within this Endangered Language Documentation Project (ELDP) mainly focuses on speakers residing in four Western villages: Damchenlhakhang, Kilkhorthang, Nyenphey and Taphu (Phobjikha county), Wangduephodrang. Hence, the people and languages represented in this ELDP are the Phobjib ethno-cultural group of Damchenlhakhang and Kilkhorthang (the oldest dialect speakers) and Nyenphey and Taphu (general/new Nyenkha speakers).

Nyenkha, an East Bodish Language, is spoken in Trongsa and Wangduephodrang by 8000 speakers and few hundred speakers at Phobjikha (Driem 1965, 2001). Each language is named after the village in which it is spoken: in Rukuji County it is called Rukujipikha, in Phobjikha it is called Phobjipikha and in Mangde it is called Mangdepikha. This has led to total abandonment of the common terms Henkha/Nyenkha/Enked. Dorji (201 1) and DDC (1999) confirm that most adult and younger generations do not recognize the terms ‘Nyenkha/Henkha/Enked’. Nyenkha, the most ancient local language, is associated with the monastery Ngaelung Dragche Ling, seat of Buddhist master Longchen Rabjam (1308-1364), the earliest monastery in Phobjikha. The number of Nyenkha speakers may have halved since 2011 (Hyslop 2013estimates 3000), and will almost certainly be extinguished in a few years. Decline is due to relocation of landless families and slash-and-burn agriculturalists to Phobjikha. Modernisation trends serve to limit the practicality of Nyenkha as a fully functional language. Nyenkha is now in danger of extinction of as no longer spoken anywhere by youth, under the influence of English and other prestigious languages. Nyenkha is devoid of resources and remains linguistically poorly-described. Its mother tongue speakers are threatened by English, Hindi, Nepali, Dzongkha (Driem 1991). Nyenkha has no government or development functions: “local speakers must adopt Dzongkha in order to understand and communicate scientific and technical terms” (Dorji 2011). Since 1970, modern schools strengthened Dzongkha as language of administration and medium of instruction. Minority languages are doubly disadvantaged: low status in formal and non-formal situations, they are neither used in military institutions nor taught in schools.

As Nyenkha declines in numbers, speakers shift toward bi-tri-lingualism. Many have extensive contact with other Bhutanese languages through trade, migration, marriage, labouring, commercial and religious activities. Almost all young speakers today speak Dzongkha, English, and other languages in Thimphu and other cities in order to maintain their socioeconomic status. Hence, documentation of Nyenkha (my team) has collected a wide variety of data in many sociocultural and ethnographic contexts. This deposit is contained at least 242 minutes video recording and 272 minutes audio recording of the Nyenkha spoken in Phobjikha village. Data types are included still existing occurrences of rapidly-disappearing traditional and sociocultural practices, oral literature and traditional religious ceremonies, taboos, including procedural narratives of milk churning, wine brewing, offering to dead souls and storytelling, et cetera. However, we could not record a three-days-long annual shamanic ritual which is normally performed in Nyenkha known as Lhaboed (calling gods and goddesses’, prayers for prosperity in villages)due to the problem of timing mismatch between our research timing and annual ritual timing. The ritual is conducted annually in the winter (December-January) and our survey happened in Autumn 2018. Other procedural narratives such as Langked ‘ox-ploughing song’, Thrung Thrung Karmoi Luzhed ‘Song about the black-necked crane, Mrashed ‘traditional arrow songs’ (ballads sung during the archery tournament), Lozey and Tsangmo ‘impromptu ballad-debates between lovers and enemies were found to be done in Dzongkha and left our for the time being.

This ELDP survey raised language preservation awareness as local teachers and language consultants were involved and would receive primary training in recording and documentation tasks. This would laid the groundwork for local participants in their future documentation and maintenance of Nyenkha.

As a Nyenkha-speaking linguist, I classify it as a dialect of broader Henkha which belong to the East Bodish branch of Western Tibeto-Burman. Although Ethnologue classes Nyenkha within a Bumthang cluster of East Bodish, along with Bumthangkha and Dzalakha, it is not mutually intelligible with either, and their relationship requires further investigation. For example, (van Driem & Hyslop) have removed Nyenkha from the Bumthang cluster because of grammatical contrasts and other unintelligible issues.

However, Ethnologue gives two dialects (Chutobikha and Phobjikha) – the proposed survey will look at Phojikha dialect, which is not documented at all. Moreover, the speakers of Kilkhorthang use some unique discourse markers and forms such as Nye (1 st singular) /ŋjɛ˦/ ‘I’ with high tone, as opposed to /ŋjʌ˨/ ‘I’ and associated with a distinctive ethno-cultural group. Nyenkha literally means “the ones who say ‘I’ “, but is understood as ‘the oldest dialect’ (nyon˦ > ŋjɛ˦ ‘before’). This noticeable and unique feature is only emerged in Nyenkha dialect spoken in Kilkhorthang and very few adjacent villages like Damchenlhakhang and Khasa in Phobjikha council of Wangduephodrang district.

There are also a number of distinctive characteristics in the Nyenkha dialect such as the remarkable and neutral-gender addressing of the 3rd person; for example, /khi/ ‘he/she’. They use /khi/ for both masculine and feminine genders of the third person singular form of the pronoun.

However, it is just the spoken language of Nyenkha speakers which has no script to write and of the medium of local community of the Phobjikha block and other few Nyenkha-speaking communities in other areas. It is now on the verge of extinction and overpoweringly threatened by the adoption of the English and other commercial languages like Dzongkha, Hindi, Nepali and et cetera. Hence, the English script has been used to transcribe the recordings if this documentation. The output included texts with accompanying digital audio/video, including all meta data and other necessary information.

The collection consists of recordings of the Nyenkha language particularly spoken in two Western villages: Kilkhorthang and Taphu (Phobjikha county). The recordings (audio and video) are the reflection of naturally occurring conversation documented in the form of monologues and dialogues.

The data for this Linguistic and ethnographic documentation of Western dialects of Nyenkha spoken in Phobjikha valley in Wangduephodrang, Bhutan was collected during the postdoctoral research of Wangchuk Rinzin, the principal investigator with Mr. Ugyen Phuntsho as Assistant Researcher and Miss. Yangchen Dekar as helper. We will collect the data during two different field trips. First trip in April-May and second trip in July-August2018 to Phobjikha, the research site. The project spans the period from January 2018 to December 2018, by which time all materials will have been made available in this collection.

Users of any part of the collection should acknowledge Wangchuk Rinzin as the principal investigator, the data collector and the researcher. The Endangered Languages Documentation Programme (ELDP) shall be acknowledged as the funder of the project. All files and data are accompanied by metadata which specifies the individual speakers/interviewees whose works, words, voices and images used for this deposit shall be acknowledged by their respective names. Any other contributor such as research assistant, language consultants and anyone who might have involved in collecting, transcribing and translating data shall also be acknowledged by their respective names.