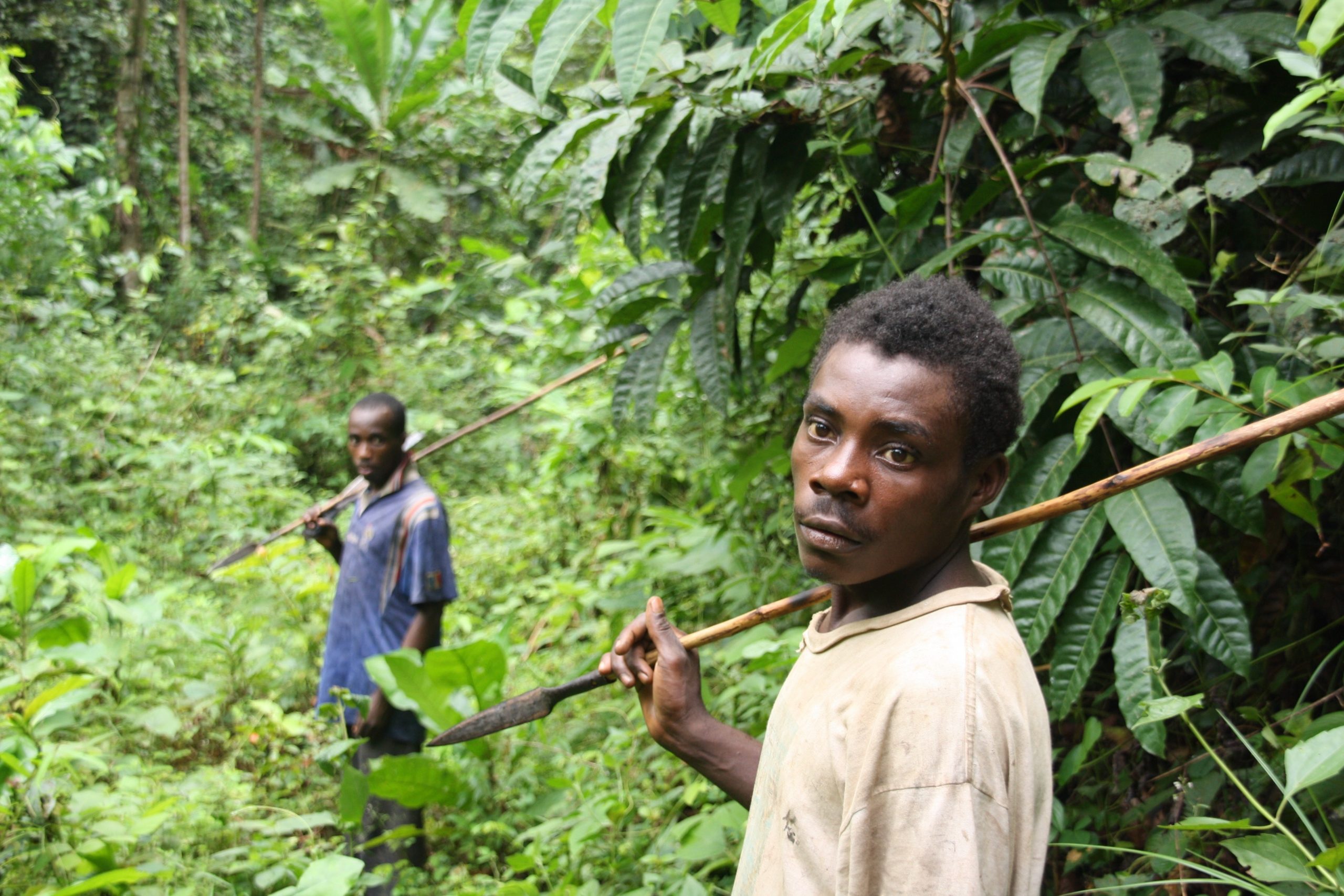 Dyuga René and Ada Joseph hunting in the forest around Ngolo village (photo: Nadine Grimm). Depositpage image for the collection ‘Causality Across Languages (CAL): Gyeli’. Click on the image to access collection.

This deposit is the result of fieldwork on Gyeli, an endangered Bantu A80 language of Cameroon spoken by “Pygmy” hunter-gatherers. The project took place within the “Causality Across Languages (CAL) project funded by the National Science Foundation (#1535846, PI: Jürgen Bohnemeyer). The experimental data investigates expressions of causality in form and function.

The people represented in this deposit call themselves Bagyeli. They are part of the westernmost “Pygmy” hunter-gatherers of Central Africa. The language they speak is a Bantu (A801) language, which is in many respects similar to their closest contact language, Kwasio, but not mutually intelligible. The language is known under several synonyms, including Gyeli, Gyele, Kola, or Bajele. Neighboring farming groups also refer to the people as well as their language as “pygmée”. There are about 4,000 to 5,000 speakers scattered over a vast area of about 12,500 km2 (4,800 m2). The Bagyeli either live in remote villages deep in the forest or in close vicinity to their Bantu farming neighbors, who belong to eight different ethnic and linguistic groups. Individual Gyeli speakers are in contact with a subset of these eight contact languages, depending on where in this vast territory they live and to what other Gyeli or Bantu farmer groups they have close family ties with. In general, the Bantu farmer languages influence the Gyeli language locally, resulting in Gyeli dialects that correspond with the farmer language they are in closest contact with.

Gyeli is an endangered language due to massive changes in the environment. With the inauguration of Central Africa’s biggest port off the shore where the Bagyeli live in 2015 and ensuing infrastructure projects, the forest that the Bagyeli depend on for hunting decreases. This forces the Bagyeli to change from a foraging lifestyle to increased farming activities and day-labor in rubber and palm oil plantations. As they adopt a subsistence strategy that is more similar to their neighbors, the Bagyeli also shift to the more prestigious languages of their farming neighbors, abandoning their own language that is associated with a backward and primitive lifestyle in the national public opinion.

The group of Bagyeli who is represented in this deposit lives in the village Ngòló, which is the Gyeli pronunciation of the Bulu village name Nko’olong. Ngòló is a few kilometers outside of the Bulu town Nko’olong and is tucked away in the forest off the road. The exact number of individuals living in Ngòló is hard to pinpoint as the Bagyeli maintain some mobility pattern between villages and several-week hunting trips, despite government efforts to sedentarize the Bagyeli since the 1970s. For this reason, there is a high fluctuation of individuals of the village with some inhabitants being away visiting relatives or staying in the forest, while relatives from other villages stay for extended periods of time in Ngòló. At its core with six to seven huts in 2017, there are on average thirty people, including children.

The Bagyeli of Ngòló speak Gyeli in the village and another Bantu language in contact situations with farming neighbors. Everybody in the village is fluent in Kwasio and Bulu. Other languages that are widely mastered as second and third languages amongst villagers include Fang, Ewondo, and Yasa.

Gyeli is an endangered northwestern Bantu (A801) language spoken by about 4000-5000 “Pygmy” hunter-gatherers in southern Cameroon.

The content of this deposit was compiled within the Causality Across Languages (CAL) project. CAL is an NSF-funded Linguistics project that investigates the representation of causality across 29 languages belonging to 26 language families and spoken on six continents. Four sub-projects explore the following topics and questions:

The semantic typology of causality: how are causal chains semantically categorized across languages for the purposes of linguistic encoding?

The representation of causality in discourse: how are causal chains represented in narratives across languages?

Causality at the syntax-semantics interface: how much variation is there across languages in form-to-meaning mapping in the representation of causal chains?

Causality in language and cognition: how are causal chains cognitively categorized across culture sand what role does language play in this variation?

This collection is comprised of experimental, stimulus-based data, including the elicitation of causal expressions via video stimuli as well as grammaticality judgments.

A documentary collection is available for Gyeli in The Language Archive: A documentation of the Bagyeli/Bakola forest foragers of Cameroon. This collection, which was compiled between 2010-2014 within a DoBeS grant, includes a variety of natural text genres centering around a forest-forager lifestyle, such as narratives, conversations, procedural texts, interviews, music, and dance, on a variety of topics, for instance hunting, building traps or huts, collecting honey, and skinning animals.