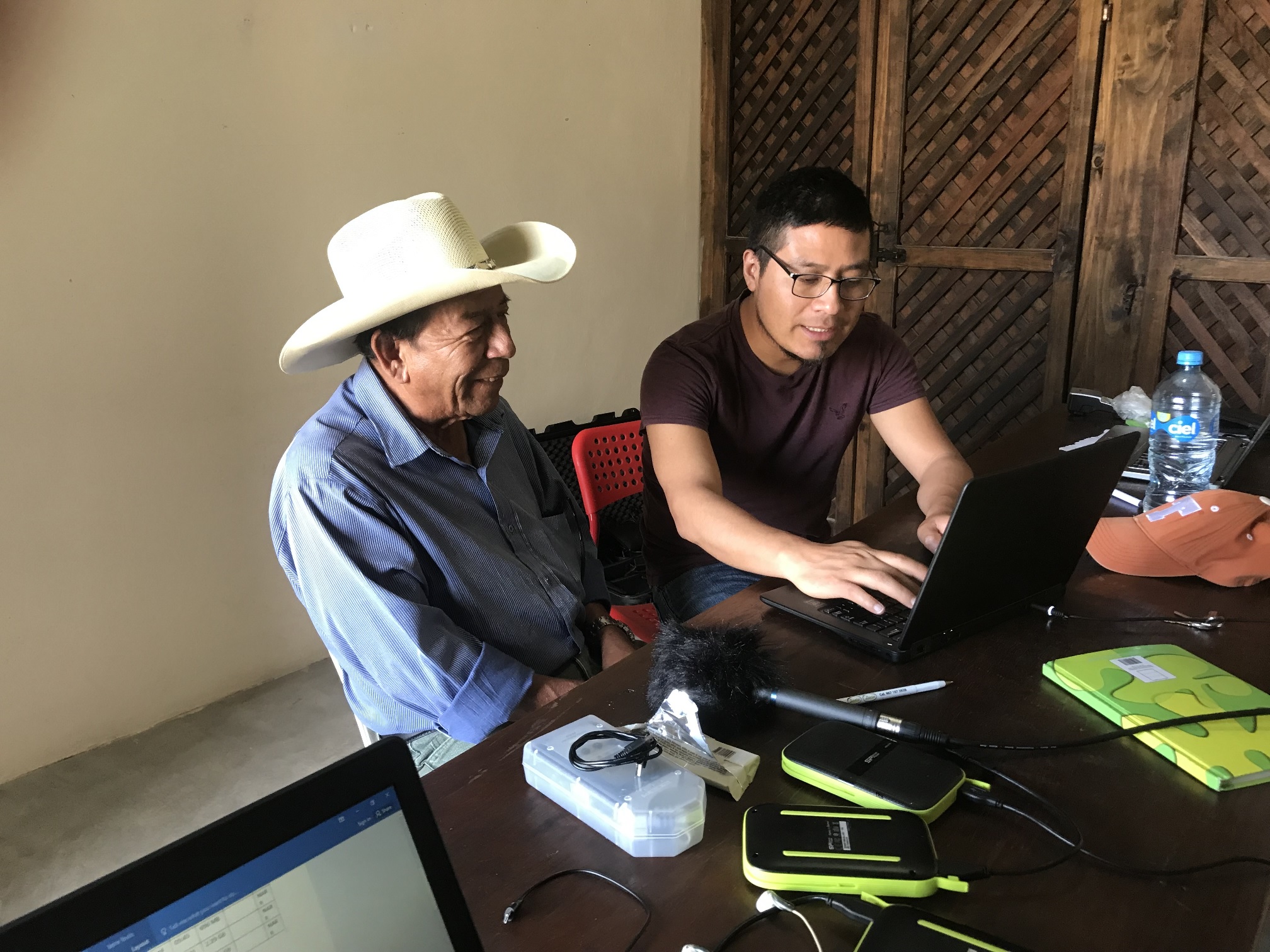 Landing page image for the collection “Documentation of Mocho’ (Mayan): Language Preservation through Community Awareness and Engagement “. Click on image to access collection.

Mocho’ is a Mayan language with two different dialects spoken in Chiapas, Mexico by around 50 speakers of whom fewer than half are fluent. It is therefore severely endangered and needs further documentation, especially of the Tuzantec dialect. Documenting Mocho’ will be accomplished in cooperation with the community and will include descriptions of everyday life, as well as verbal art, cultural traditions, botanical knowledge and songs to the extent available. The results will be 75 hours of video and audio recordings. From this corpus, 15 hours will be transcribed and translated in ELAN and annotated in FLEX.

This project focuses on Mocho’ speakers. Mocho’ is a highly endangered Mayan language spoken in the municipalities of Motozintla and Tuzantan on the borderline between Mexico and Guatemala, in the area known as Middle-America. This language belongs to the Q’anjob’alan subgroup from the Western branch of Mayan languages. Mocho’ is spoken for about 50 speakers of whom fewer than half are fluent. The majority of these remaining speakers are elders, and the youngest speaker is 70 years old. This language consists of two dialects. The language is called Tuzantec in the region of Tuzantan, and there are only 5 speakers left, 3 of whom are still fluent. The dialect spoken in Motozintla is known as either Motozintlec or Mocho’, and there are around 40 speakers. Both municipalities include more than one village, and all of them call their languages Qatook’ which means “our language”. Mocho’, the name of the language, was given by the Spaniards when they got to Motozintla. Spaniards asked Mocho’ speakers for the name of their language, and each time they were asked the same question they just replied “moocho'”. Spaniards thought that that was the name of the language, so they just called it “Mocho'”. Moocho’ however means “there is no (name)”. This project tries to capture all possible voices from these small group of remaining speakers. Most of these speakers are currently settled in the peripheries of Motozintla, around 30, and the rest are dispersed in the surrounding villages of Tolimán and Belisario Dominguez, villages that belong to the Municipality of Motozintla. All of these villages speak the same variety, and they recognize themselves as Mocho’ speakers. The Tuzantec dialect is spoken in two main villages: Tuzantán Pueblo (3 speakers) and Estación Tuzantán (2 speakers). Tuzantec people used to recognize themselves as Mamean speakers (Mam is also a Mayan language that belongs to a subgroup from the other big branch of Mayan languages, the Eastern branch). Tuzantan and Motozintla have a common story about the original place where they came from; however this location continues to be a mystery. This story tells of a frightening invasion of bats in the original Mocho’ community. Suffering the constant injuries of bat bites, the inhabitants were eventually forced to relocate to Motozintla and further south to Tuzantan. There, their language gradually diverged until today it is recognized as a separate variety. Although the varieties are mutually intelligible with practice, relations between the two communities remain distant. There is talk on both sides of shape-changing witches and a distant feeling of kinship. The Mocho’s have maintained close relations with Mam speakers of the region. The Mam people have always occupied the adjacent area and their migration to Motozintla and neighboring towns has increased steadily since the late nineteenth century. The presence of different cultures has provoked a syncretism in religions as well as other contact-induced changes among Mam, Teko, Spanish and Mocho’ in the Motozintlec area. The centrality of the Mocho’ lands between the central area and the coast of Chiapas has been crucial since the ancient times. Motozintla’s identity as a market center was probably established early on. The modern Tuzantan-Motozintla road follows a path established centuries ago along the river canyon that provides a natural pass through the Sierra Madre. This has facilitated regular contact with many other languages and cultures (mostly Mayan) which also became the basis of many local stories and myths about the travelers and the local beliefs. There is also a very important event in the history of Mocho’ that corresponds to the date when the Province of Chiapas was transferred to Mexican control in 1824 after having been governed since 1544 by the colonial magistrates of the Capitanía General de Guatemala. Motozintla and Tuzantan were part of the disputed borders between Guatemala and Mexico, and they were controlled by the Departamento de Cuilco from Guatemala until September 27, 1882. A final transfer of Motozintla and Tuzantan to the Departamento del Soconusco in Mexico took place on April 1, 1894. The transfer of borders made the residents citizens of Mexico instead of Guatemala. This incident forms one of the grounding narratives in modern Mocho’ accounts of community history. Living members of the community can recall first-person eyewitness experiences of these events narrated by parents and grandparents.

Mocho’ is a Mayan language spoken by about 50 speakers in the Southeast of the state of Chiapas, Mexico along the border between Mexico and Guatemala in the two municipalities of Motozintla and Tuzantan. This language consists of two dialects. The language is called Tuzantec in the region of Tuzantan, and there are only 5 speakers left, 3 of whom are still fluent. The dialect spoken in Motozintla is known as either Motozintlec or Mocho’, and there are around 45 speakers where fewer than half are fluent. Both municipalities include more than one village, and all of them call their languages Qatook’ which means “our language”.

Mocho’ is severely endangered and needs further documentation, especially the Tuzantec dialect. There is no grammatical description of the Tuzantec variety, and we know little about Motozintlec. So far, we know, for example that Mocho’ is the only one Mayan language that shows split ergative system in the alignment conditioned by person. First and second person have changed to a nominative-accusative alignment while third person keeps the ergative-absolutive alignment. Even though, we know little about Motozintlec, it shows many interesting features from a typological perspective that we do not find in other Mayan languages (to be described).

Motozintla is located in an important area between the roads from the highlands of Chiapas and Guatemala to the Pacific coast since the ancient times. Due to its location, Mocho’ has also been in intense contact with Tseltalan, Q’anjob’alan, Mamean languages (subgroups from the two big branches of Mayan languages) as well as with Tapachulteco (extinct Mixe-Zoquean language). Therefore, Mocho’ is not interesting only from a typological perspective, but from a perspective of language change, language contact and language loss.

This collection is about Mocho’, and it covers the two existing dialects: Motozintlec and Tuzantec. Each file specifies whether the data come from Motozintla or Tuzantan, so be sure you are using the right data.

Previous documentation projects in this language have only audio recordings with transcriptions. This project is special because it is the first one that offers audio and video recordings in a variety of genres and social interactions. Most important, it contains some speech events that had not been documented previously for this language. For example, we can find audio-video recordings of prayers in Mocho’, first of its type to be open to the public, that had not been previously documented. This collection contains a series of prayers, and one of them present the orthographic transcription with a translation in Spanish, and it will contain the English translation as well. Another example is that this collection contains different sessions of conversations between two Mocho’ speakers, and sometimes a group of Mocho’ speakers. Through these conversations we can see certain patterns that Mocho’ speakers do not use when they narrate or share a story (certain particles and certain grammatical patterns). Therefore, the inclusion of the two dialects, the exposition of Mocho’ people in video recordings, and the documentation of certain traditional practices make this collection unique in Mocho’.

This collection contains video and audio recordings collected in 2018 and 2019 and another data set will be loaded by summer 2021. So far, this collection contains 69 bundles from which 66 are video recordings with the corresponding extracted audio, and 3 bundles containing only audio. At this point, the collection has approximately 66 hours of video recordings, and 3 hours of stand-alone audio files. Making a total of 69 hours of data. Written texts sum up a total of 7 hours of translated and transcribed texts, and over 6 hours of transcribed texts in progress. Translations so far are only in Spanish. The data comes from Motozintla and Tuzantan, and each file specifies its origin and the collaborator. This collection covers different genres and a diversity of speakers, taking into account that this language is highly endangered and that speakers are all elders. The collection will be updated by the Summer 2021, you do not want to miss the final outcome!”

The Mocho’ data for this collection is being collected (through September 2017-July 2020) by the principal investigator Jaime Pérez González, as part of his primary source for his dissertation; A Descriptive Grammar of Mocho’. This effort is being carried out by Jaime with the engagement of community members and people interested in the documentation and the revitalization of Mocho’. The data is collected mainly by Jaime at this point of the project, but it is also expected to be collected by members of the community, and other collaborators who are learning techniques in language documentation. The data come from Motozintla and Tuzantan, two municipalities in Chiapas, Mexico. Data from Motozintla have been collected during the Fall 2017, and the data from Tuzantan have been collected during the Spring and the Summer of 2018. More data will be added through these upcoming years.

None of the data in this collection will be used as evidence in court at any point.

Users of any part of the collection should acknowledge Jaime Pérez González as the principal investigator, the data collector and the researcher. Users should also acknowledge the Endangered Languages Documentation Programme (ELDP) as the funder of the project. Individual speakers whose words and/or images are used should be acknowledged by respective name(s). Any other contributor who has collected, transcribed or translated the data or was involved in any other way should be acknowledged by name. All information on contributors is available in the metadata.