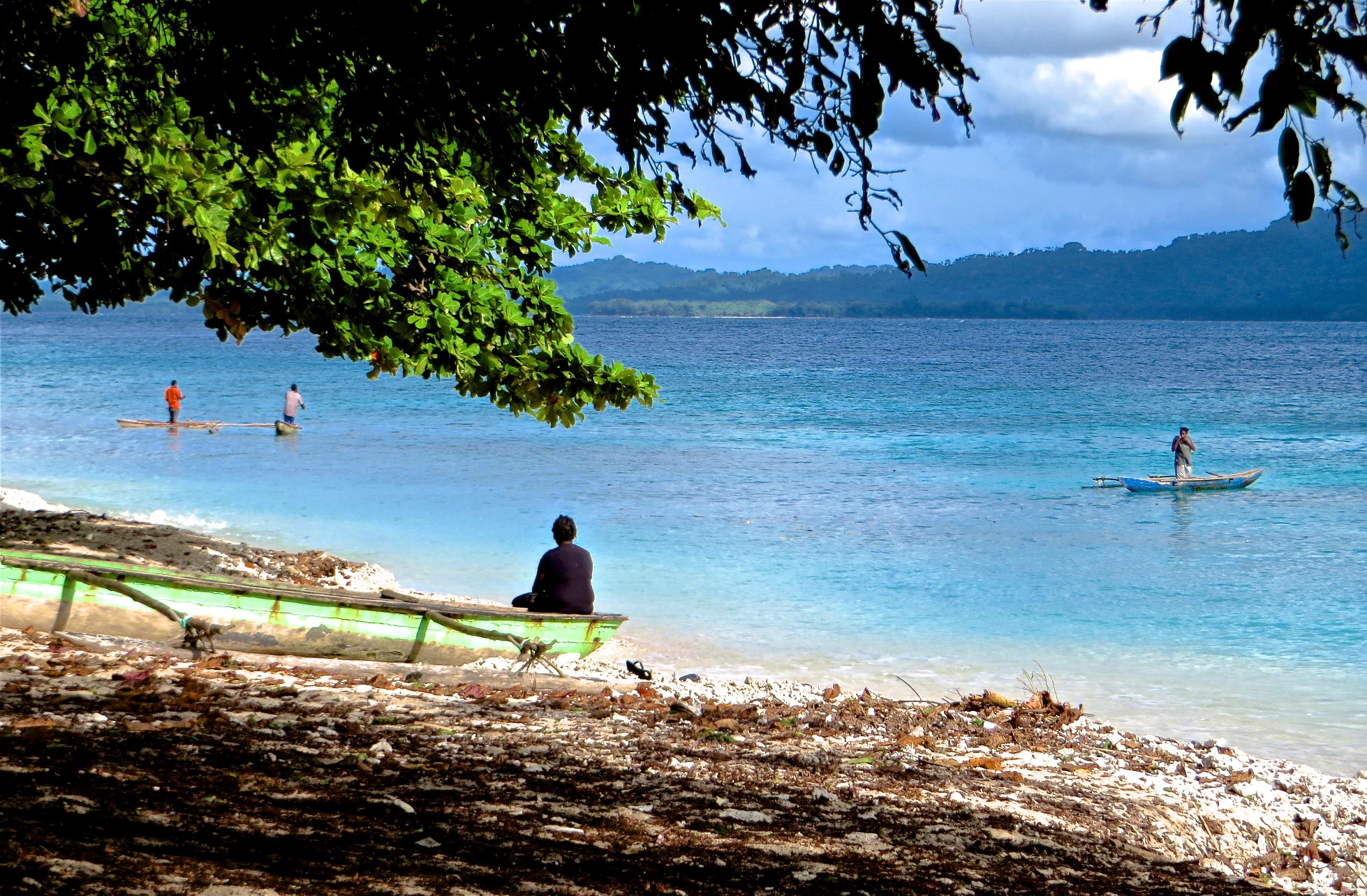 Landing page image for the collection “Documenting Ahamb, a Small Island Language of Vanuatu”. Click on image to access collection.

Ahamb is one of over 120 vernacular languages spoken in the Republic of Vanuatu in the South Pacific. It has around 950 speakers and is primarily spoken on the small (<0.5 km2) Ahamb Island, off the southern coast of Malekula, the second largest island in Vanuatu. The language is endangered because of pressure from Bislama, migration due to climate change, and other environmental and socioeconomic factors.

Prior to 2017, Ahamb had very few written resources. This archive collection includes the data collected during the Ahamb Language Documentation Project (2017-2020). The project has so far resulted in a standardised orthography, an audio-visual corpus, of which around 22 hours of speech have been annotated (> 93,000 words), a grammatical description, an Ahamb-English-Bislama wordlist and some literacy materials.

The Ahamb language has around 950 speakers, most of whom live on Ahamb Island, with smaller pockets of speakers living on the adjacent mainland of Malekula Island and in the urban centres of Vanuatu, mostly in Port Vila.

Ahamb Island is situated in Umbeb Bay, around 2 km away from the Malekula mainland. According to local oral tradition, the island was inhabited before the first Europeans arrived, at a time when the majority of the population of Malekula was spread over the rugged mountainous interior of Malekula. As part of the process of Christianisation virtually all inland residents of Malekula moved to the coastal areas, which brought new residents to Ahamb. Historically, however, the people of Ahamb own the part of the Malekula mainland that is nearest to Ahamb, adjacent to the non-Ahamb speaking villages of Farun and Hokai. Most Ahamb people live on the small island and travel to the mainland daily to tend to their gardens. In the past couple of decades, due to population pressure and the effects of climate change, some Ahamb speakers have moved to the mainland to form eight small settlements there. There are also around 100 Ahamb speakers living in Port Vila.

This project looks at the language as it is spoken in all of these areas with a focus on Ahamb Island. No significant geographical variation has been observed.

Virtually all speakers of Ahamb are bilingual in Ahamb and Bislama (a dialect of Melanesian Creole), the national language of Vanuatu. Some Ahamb speakers also speak English. French is not commonly spoken. Bislama is the more prestigious language and the language of choice for trade and communication with the authorities and people from other language areas. It is also the more common language for church services. Bislama and English are used in teaching at the local primary and secondary schools. Ahamb is mostly used at home and by children when they play, and sometimes for kastom ceremonies. Ahamb borrows heavily from Bislama and code-switching is common.

Although it is passed to virtually all children living on Ahamb Island, the language is considered endangered due to Bislama being the dominant and more prestigious language and the limited domains, in which Ahamb is used. Other socioeconomic factors that contribute to Ahamb’s endangerment status include migration due to climate change (more frequent and severe storms and cyclones and the resulting erosion), overpopulation, the general effects of globalisation and, to a lesser extent, to varying attitudes by the speakers and the authorities.

Ahamb’s phonology is characterised by distinctive prenasalisation in its plosives and trills. There are four contrastive trills, including the typologically rare plain bilabial trill. The vowel inventory is also relatively large compared to other related languages, with eight contrastive vowels.

Nouns in Ahamb are classified as common, personal and local. They can also be classified as alienable and inalienable, which corresponds to a structural distinction in possessive constructions involving classifiers (general and alimentary) or direct suffixation respectively. Noun phrases consist of a nominal head and various modifiers that follow it in a relatively flexible order.

Verbs in Ahamb can be transitive and intransitive. Intransitive verbs are further classified as active or stative. Detransitivisation is possible with the use of prefixation or reduplication. Verbs can take a number of prefixed tense/aspect/mood/polarity modifiers and commonly feature a subject index. Subject indexes come in three paradigms with forms for all person, number and clusivity distinctions. Neutral subject indexes are used in a variety of situations and combine most freely with other preverbal modifiers. Sequential event subject indexes are used to mark the second and subsequent verb in complex clauses that encode sequential events with the same subject. Irrealis subject indexes are used in interrogatives and negative modality constructions, among others. The objects of transitive verbs can be encoded by an object pro-index, which can take four different forms.

Ahamb has SVO word order. Negation can be expressed in a number of ways, including a separate prohibitive coding and a negative modality particle. Different verb-like forms can function as prepositions and deictic markers. Complementation can be expressed with or without a complementiser, corresponding to a distinction in the semantic properties of the complement taking verb. Verb serialisation has been attested on the nuclear and core level. A special type of nuclear serialisation-like construction involves coverbs – non-prototypical verb forms that are only attested in such constructions. On the core level, switch-function and ambient serialisation is attested. Subordination is possible with a large variety of conjunctions. Other complex clause types include sequential event constructions and both syndetic and asydentic coordinating constructions.

All materials have been archived with open access, except for two bundles, which had to be archived with restricted access due to them containing sensitive information

Around 22 hours of recorded speech were transcribed, translated and annotated to create a written corpus of the Ahamb language. This corpus contains over 93,000 tokens. The corpus was used as a basis for Ahamb’s grammatical description and the wordlist.

The corpus is organised around bundles with number codes. The following organisational structure applies:

ahb901-ahb904 – recordings of narratives that have not been annotated

The data in this collection was collected during the doctoral studies of Tihomir Rangelov, the principal investigator, at the University of Waikato in New Zealand. Tihomir Rangelov collected the data during three trips to Ahamb of 8-9 months in total during 2017 and 2018. Some elicitation over the phone was conducted in 2020. Many of the data were archived in 2018 and 2019. Bundles ahb001-ahb504 were replaced in late 2020 with the latest annotation files.

Users of any part of the collection should acknowledge Tihomir Rangelov as the principal investigator, the data collector and the researcher. The Endangered Languages Documentation Programme (ELDP) shall be acknowledged as the funder of the project. All files in this collection are accompanied by metadata that specifies the individuals whose voice and images appear in the materials as well as any other contributors, who might have been involved in the process of collection, transcription or translation of the data or in any other way. All such individuals shall be acknowledged by their names.