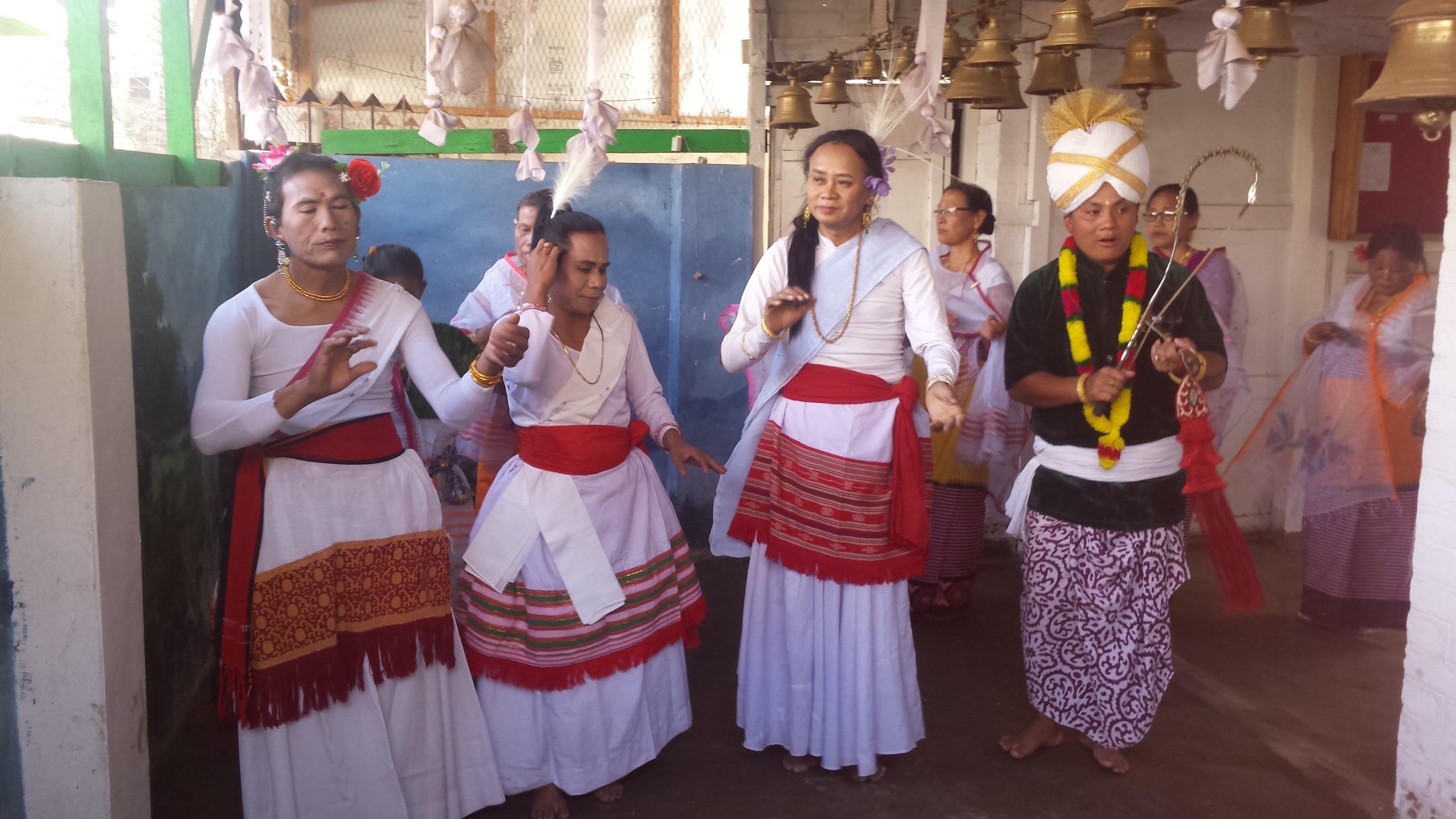 Landing page image for the collection “Amailon: the ritual language of the Nupa Maibi”. Click on image to access collection.

Project Profile: Amailon: the ritual language of the Nupa Maibi

The Amailon variety of Meitei is a liturgical genre spoken by the Maibi (also spelled Amaibi), indigenous shamanic priestesses of the Sanamahi tradition in Manipur state, Northeast India. The term itself is a compound of mai ‘shaman’ + lon ‘language’. Meitei is thought to be a Tibeto-Burman language, but controversy remains regarding this point and there is no absolute consensus among linguists.

The language continues to be spoken by a community estimated to not exceed 1,200 individuals, and its status as a ‘living’ language exists entirely due on its continued use in indigenous rituals, dances and other ceremonies performed by the Maibi.

Among the Maibi population there is a far smaller sub-community of priestesses who are gender-diverse. These individuals, estimated to be no more than a dozen in number, are the Nupa Amaibi, who are the consultants for this project.

The archaic precursor to the Meitei language (also spelled Meeitei and Meithei), Meiteilon, is known to have an abudiga orthography (a C+V system of segmental representation) known as Meiti Mayek. The script dates back at least to medieval times, and according to some scholars, possible beyond two millennia. The language is unique in the context of Tibeto-Burman languages of North East India (few of which have script) for this reason alone.

In 1732, the reigning monarch of Manipur, King Meidingu Pamheiba, who had converted to Vaishnavism (a variety of Hinduism), ordered the destruction of literature written in the old language, in order to promote Bengali script. As a result of this linguistic and cultural erasure, only a handful of examples written in Meiti Mayek remain. The puyas, sacred books of the Sanamahi tradition, were almost completely destroyed in the process. Some puyas remain in the royal collection at Imphal, however these remain largely inaccessible outside the few with scholarly ability to read and interpret archaic Meitei Mayek.

Since there is virtually nothing remaining in the way of existing orthographic representations of the religious texts of the language, Amailon has only remained a living, spoken language exclusively thanks to the cultural practices of the cultural genres of ritual and the arts performed by the Maibi priestesses.

The Nupa Amaibi are renowned for their skills in magical practices such as exorcisms and healing rituals, as well as cultural expressions involving song and dance, especially khutek, ‘hand dancing’. The tradition of gender-diverse shamans in Manipur goes back centuries, and they are known to have existed prior to annextation by the British in the 19th century. Documentary evidence for this lies in two photographs taken in the 1880s by Sir Thomas Mowbrey, a British military officer who acted as a British agent in Manipur upon retirement from military service.

In pre-colonial Manipur, the Nupa Maibi had a high degree of acceptance within traditional Manipuri culture, and some were employed by the royal court to perform divinations and for their dancing skills.

In modern Manipur, the dual impacts of militarization and post-colonialism, the position of social standing once enjoyed by the Nupa Maibi has been eroded, and there are only a handful of practitioners remaining who understand and can perform the complex rituals and dances of their culture.

The main consultant for this project was Ima Bobby Amaibi, a high priestess who was based in the capital, Imphal until her passing in April, 2017, shortly after completing the recordings for the project. Ima Bobby generously agreed to participate in the project, knowing that the cultural practices of her community were rapidly disappearing.

The recordings made for this project encompass Amaibi ritual, dance, song and also comprise interviews with Ima Bobby Amaibi, and another priestess, Ima Nanao Amaibi.

The feature recording is the ritual dance known as Laihou Jagoi (pictured above), wherein a long turn-taking narrative is sung, accompanied by dance. Other rituals included in the collection are an excorcism, and a fortune telling. The interviews with Ima Bobby and Ima Nanao provide an interesting insight into the life of a Nupa Amaibi from the points of view of a senior and a junior priestess.

The content of the collection is of interest not only linguistically, being a rare expression of archaic Meiteilon, but also culturally, in light of the rising influences of Hindu culture from ‘mainland’ India, and increasing contact with Western influences in mass media and communication, both of which influences are rapidly diminishing these arcane aspects of the indigenous culture of Sanamahi.

The linguistic expression of the Nupa Amaibi differ in some ways to their cisgender counterparts, the Nupi Amaibi. Perhaps the most interesting difference lies in the semantic interpretation of certain songlines, and in the degree of complexity afforded to storytelling through rituals involving jagoi ‘dance’, and especially khutek jagoi ‘hand dancing’. Consultants also claim that there is a phonological variation that exists between the singing style of Nupa Amaibi, as compared to that of Nupi Amabi.

In the Leihou Jagoi text, which is almost entirely sung in archaic Meiteilon, a striking grammatical feature is the proliferation of nouns case-marked for gender. In Modern Manipuri, this type of case-marking has become degrammaticalized and only occurs as a semantic feature of a handful of nouns.

The collection contains five bundles, corresponding to five texts. Twi texts are rituals performed by Ima Bobby, Ine text is the group performance of Laihou Jagoi by a number of priestesses, led by Ima Bobby Amaibi, and the final two bundles are interviews with Ima Bobby and Ima Nanao.

Each bundle consists of an annotated elan file and a corresponding pdf file of the translated text with interlinear glossing. Informed consent was obtained on video and these are also attached to the bundles. All the materials are provided for access to users of ELAR.

The data for this project was collected by Karen Parker, PhD candidate at La Trobe University, and was supported by a small grant from the ELDP (SOAS). The data was collected between December 2016 and January 2017 when Karen parker went to Manipur on fieldwork.

In any discussion of the Nupa Amaibi, please be sensitive to the socio-cultural needs of the community. The Nupa Amaibi, as with most gender diverse and transgender communities of the world, experience high degrees of discrimination and violence. It is with a high degree of personal trust in the investigator that they were willing to share these documents of their unique position in the indigenous culture of Manipur.

None of the data in this project may be reproduced without consulting and gaining ethical permission from the researcher Karen Parker and her contacts in Manipur. In the instance that another researcher wishes to reproduce any part of the data presented here, the correct procedure would be to contact Karen Parker, who is able to in turn contact representatives of the Nupa Amaibi in Manipur.

References to any part of the data presented here should acknowledge Karen Parker as the principal investigator, collector of data and researcher. Users who make reference to this project and its content should also acknowledge the Endangered Languages Documentation Programme (ELDP), who supported and funded the project.