Documentation and grammar of Gutob (Munda) 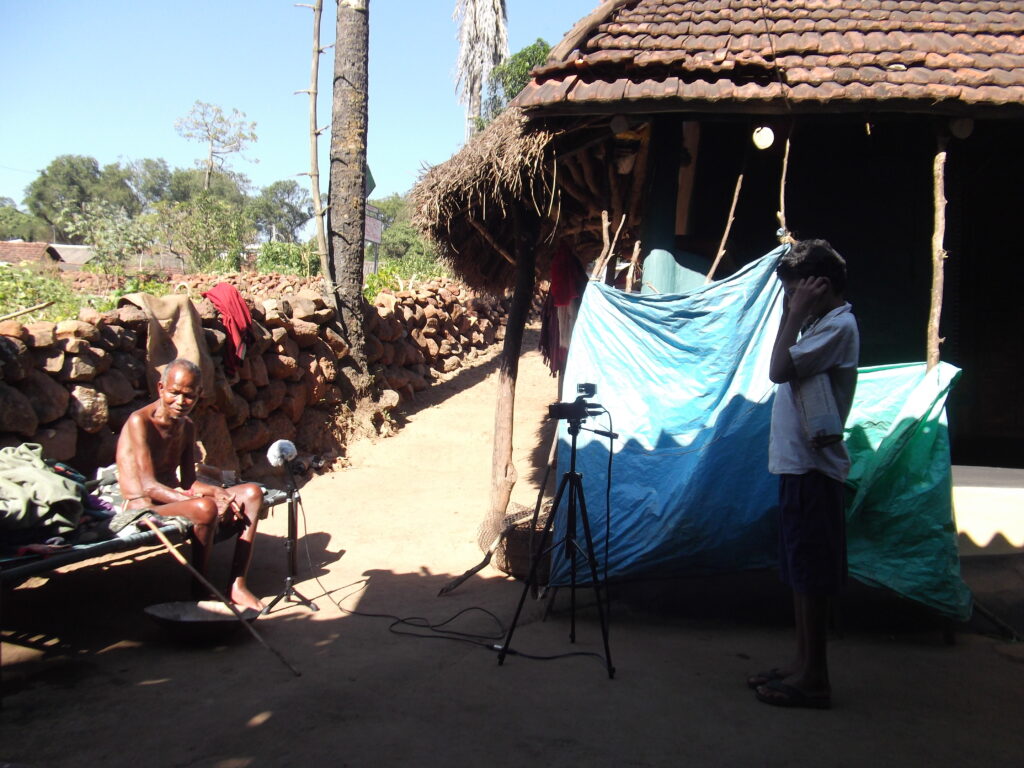 Sonia Sisa is telling a story, with his grandson Bharatam monitoring the audio. Landing page image for the collection ‘Documentation and Grammar of Gutob’. Click on image to access collection.

Gutob is spoken in East Central India, especially in Southern Odisha and Northern Andhra Pradesh. This project was based in the Koraput District of Odisha, India. Most recordings were obtained in and around the village of Jalahanzar. Additional recordings were made during trips to Kozriput, Tikrapada, Litiput and Onukadilli. As the Gutob live in a multilingual society, with rites and beliefs which they share with their non-Gutob neighbours, the language is not used in all domains of daily life. The field work included an evaluation of the domains in which Gutob is still used. It was found that Gutob is still used in private settings between older community members. Especially among older women it is still occasionally is heart. In the home Desia is spoken, especially if there are younger people in the household. As Berger (2007) reports, the domain of religion is one in which mainly Desia Oriya (the Indo-Aryan lingua franca) is used. Since villages are multilingual, Desia is used for village-level discussions.

The collection consist of audio- and video recordings of stories, conversations and songs as well as grammatical elicitations. Many of the stories and conversations are transcribed and annotated, with a subset containing translations into English and sometimes Desia. A few ritual recordings are in Desia, which is the main language in the ritual realm. The community enjoyed to record songs and also loved listening to them. Especially the recording of songs of two Litiput women, who are originally from further up the hills in Malkangiri, is a favourite in the community. Their songs differ significantly from the style around Jalahanzar.

The group represented in this collection are the Gutob, sometimes called Gadaba or Bodo Gadaba by other groups and in the literature. They live in the highlands of Odisha, India, in a multilingual society. The Gutob live in a multilingual setting together with other Austro-Asiatic, Dravidian and Indo-Aryan languages. Like the other so-called “tribes”, the Gutob share their villages with several Desia (Indo-Aryan, ISO639-3:dso) speaking groups in a complex and interdependent social structure. While the Gutob (like the Gorum, and others) are traditionally the land owners in their respective villages, they depend on other groups and their special occupations such as the Kumar (potters), the Goudo (herdsmen), the Dombo (weavers and musicians) and others for many of their daily needs. All of these groups form a hierarchical social system expressed in commensality rules, with different functions and responsibilities with regard to economy and rituals. Thus both within and across villages Desia is used as the local lingua franca. Peter Berger (2007, English translation 2015) has written an extensive ethnography on the Gutob. See also Berger (2002) on the relationship of the various groups within the “Koraput complex”. Due to the lack of recent surveys and the confusion of the language with unrelated Dravidian languages, there is little reliable information about the number of speakers. Griffiths (2008) estimates that there are 10,000-15,000 speakers of Gutob (2008:635). However, Berger’s statement that “[…] there are 50 Gutob villages (probably there are less) in the Lamptaput/Onukadilli area with an average of 200–300 people […]” (Griffiths 2008:675) seems to suggest that this is the number of ethnic Gutob rather than of Gutob speakers. A survey done by the Asha Kiran Society in 1998 estimates that there are only around 5,000 active speakers (Rajan & Rajan 2001), probably a more realistic number. His assumption that about 80% of Gutob speakers have already shifted to Desia, is in line with my observations during my field trip.

The collection contains recordings of Gutob (ISO639-3:gbj), a language from the Munda branch of the Austroasiatic language family. The language is spoken in Central East India (Southern Odisha) and is highly endangered. The youngest speakers are in their mid twenties (only women) and children are no longer acquiring the language as the community is rapidly shifting to the local lingua franca Desia.

The collection contains 18,5 hours of transcribed audio and video recordings consisting of the following genres:

Many of the recordings contain additional morpheme, gloss and part-of-speech annotations. A subset also contains translations into English and/or Desia. The annotations will be continuously updated along with progress in the analysis of the language and further annotations will be added as well.

There are also ~24h of recordings, which have not been transcribed yet or can’t be transcribed, including:

The collection also contains 169 photos made during my stays in Jalarhanzar.

Users of this collection should acknowledge Judith Voß as researcher and as data collector. To refer to any data from this collection, please cite the corpus as stated below. If you use specific examples from the corpus, please also give the file number as a reference.