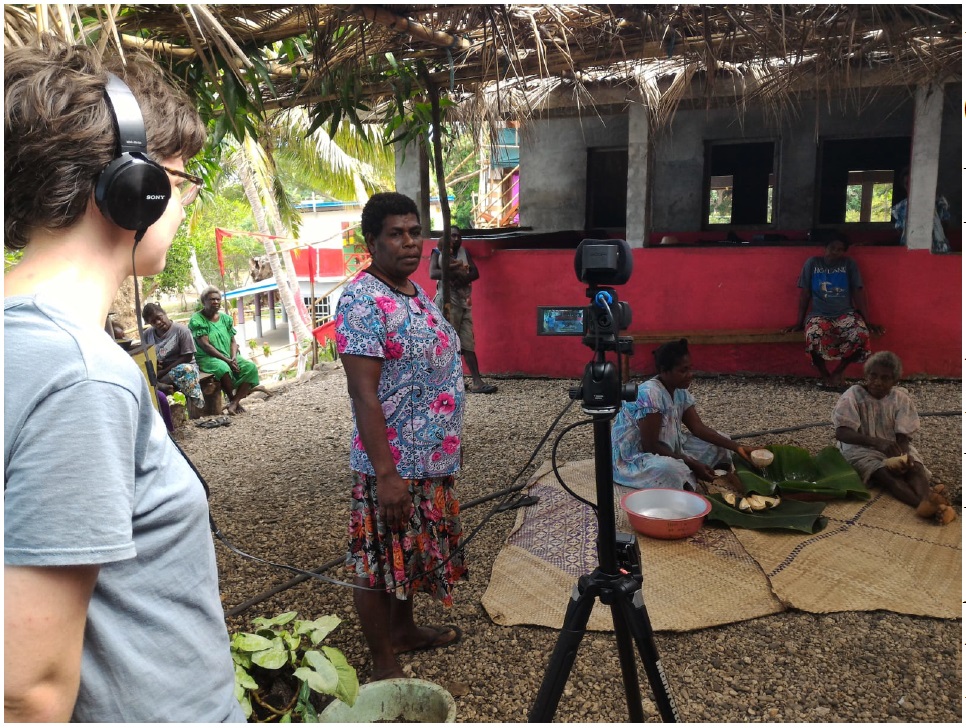 This project is concerned with the documentation of Ninde, a threatened Central Malekula (Oceanic) language spoken in five villages in the South West Bay region of Malekula island of Vanuatu. Ninde is almost entirely undocumented; there is a sketch grammar based on data from one young speaker. The language is spoken by at most 1000 people, and in four of the five villages is not being transmitted to children. One of the immediate goals of this project is the community-led creation of an orthography and possibly even pedagogical materials in order to facilitate Ninde-language education and preserve traditional knowledge.

Ninde is an Oceanic language of the Central Malekula branch that is spoken by the Mewun ethnolinguistic group in the South West Bay area of Malekula island. Ninde is spoken in five villages in this region: Lawa, Labo, Lorlow, Windua,and Mahapo. Ethnologue gives the number of speakers as 1,100 as of 2001. It is likely that this number is actually lower: according to both Kaitip Kami and Edwel Kaising, the chief of Windua and of the Mewun people as a whole, children are not learning Ninde in four of the five villages. Windua is the sole exception. Instead, children speak Bislama in non-educational contexts, and learn English in school. This is the national education policy, which stipulates that instruction must move from Bislama or a local language to either English or French by Year 3, although Bislama or a local language may be used when students are still transitioning. The degree to which children and adolescents are passively bilingual is unclear, but parents often address them in Bislama. Bislama and Ninde are the languages of day-to-day communication for older speakers.

The documentation of Ninde highlights several areas of linguistic interest. For example, Ninde has a bilabial trill, which is not included in the sketch grammar but which is present in older speakers’ language. The language also has an as-of-yet unidentified lateral segment and a rhythmic stress system which has yet to be described in any detail. In addition, the sketch grammar is based on the speech of a single speaker who left the community at age 18, so we can expect to find morphosyntactic phenomena that have not yet been described. There is also dialectal variation in the production of the high rounded front vowel.

‘Ethnologue indicates Ninde’s language status as Threatened, but with positive attitudes towards the language. There is indeed a great deal of concern for the vitality of the language; the reason that we were contacted and invited to South West Bay was to help develop an orthography for Ninde in the service of pedagogical materials that could be developed for the kastom school. The kastom school is a small school run by community members, designed to teach children the Ninde language and other important Mewun cultural traditions. It will play an important role in the preservation of the language. The development of pedagogical materials, in addition to a planned location change, will
help to encourage even greater enrollment.

During our visit, multiple chiefs expressed the desire to see the language passed down to younger generations. The orthography will be developed jointly by the two of us and the council of chiefs, who will represent all five of the villages where Ninde is spoken, in order to make sure that the orthography is tailored to the community as closely as possible.

Documentation will take place in all five Ninde-speaking villages: Lawa, Mahapo, Labo, Lorlow, and Windua. During our previous field trip we recorded speakers from each of the five villages and noted differences in pronunciation that may be indicative of a small-scale dialect chain. Further investigation is needed to confirm this, and it is also likely that as we construct the orthography, intuitions about different varieties of Ninde will emerge.

Data will be deposited in the national archive, and will also be left with the kastom school instructors. We will also provide training in recording techniques to interested community members’.