Documentation of the Beth Qustan Dialect of the Central Neo-Aramaic language, Turoyo 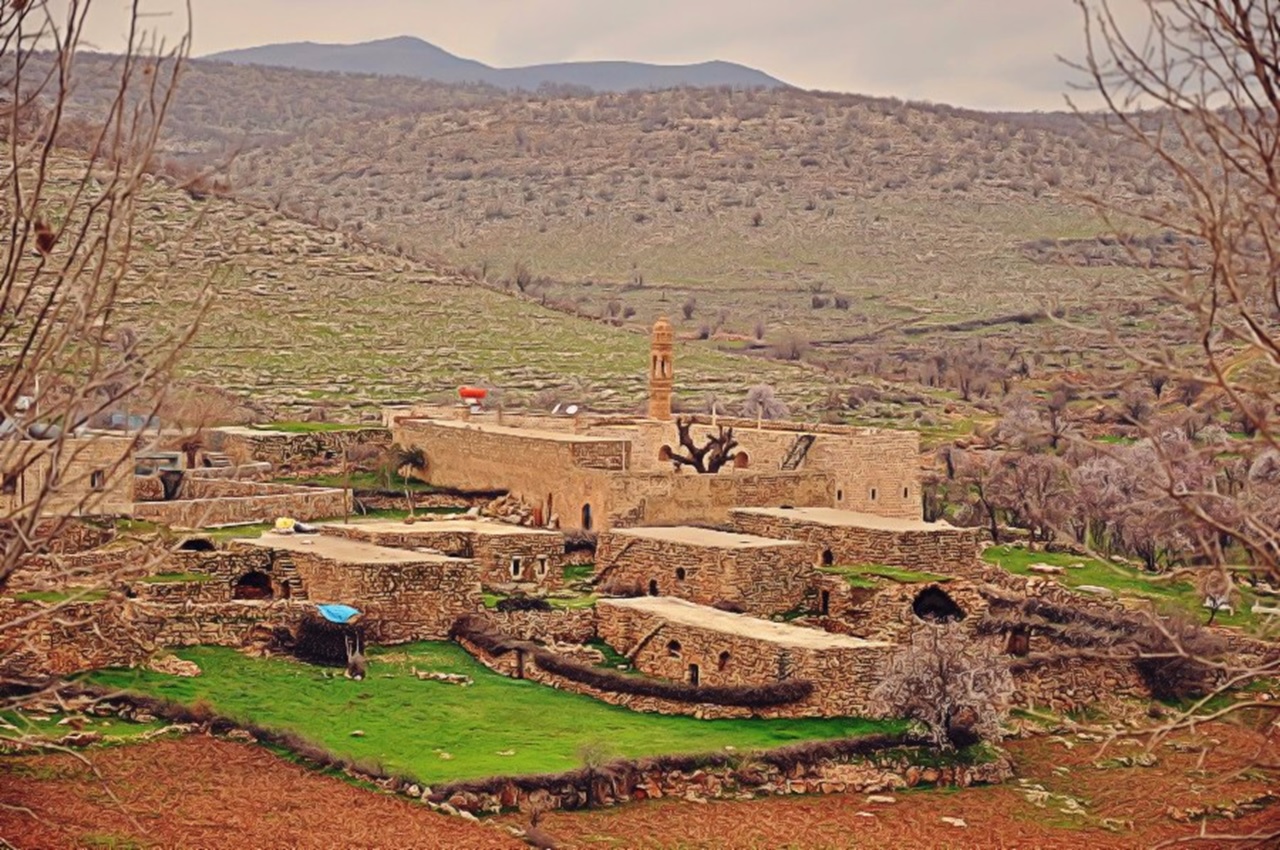 Deposit page image for the collection ’Documentation of the Beth Qustan Dialect of the Central Neo-Aramaic language, Turoyo’. Click on image to access collection.

The Beth Qustan dialect of Neo-Aramaic is the vascular of the Christian village of Beth Qustan or Beth Kustan since time immemorial. It is known in Neo-Aramaic as ‘Be Qusyone’, in Syriac ‘Beth Qustan’ (literally ‘the house of Constantine’), in Kurdish ‘Baqisyan’, and it has become known by its Turkish name ‘Alagöz’ since the 1930s. Beth Qustan is one of dozens of villages in Tur ‘Abdin (literally in Syriac, ‘the mountain of worshippers’), whose inhabitants still speak a specific dialect of Neo-Aramaic, which is better known to the community as Turoyo, the language of Tur ‘Abdin. It is one of the few remaining Christian villages within the Christian stronghold of Tur ‘Abdin, and it is a mountainous enclave of the Mardin Province, in South Eastern Turkey. The Beth Qustan village was a flourishing rural centre part of the food basket of the Fertile Crescent at the turn of the 20th century with approximately 200 families living in the village, however, only an estimated 20 families remain inhabitants of Beth Qustan in 2017.

Beth Qustan, like many other villages in the Tur ‘Abdin region, was probably inhabited in pre-Christian times, and it is believed that the village was a place of rest for travellers and the army of the Roman Emperor, Constantine I, repeatedly marched through the village. Located near the village is the rock of Helen which was named after St. Helen, the mother of Constantine I. Beth Qustan has nursed the renowned St. Gabriel, who was born in 574 and dedicated his life to the Monastery of Qartmin. Following the performance of several miracles, St. Gabriel became the patron saint of the Monastery of Qartmin, which by the end of the 15th century has become known as the St. Gabriel Monastery.

The Beth Qustan dialect focuses specifically on old wives’ tales and supernatural legends, resulting from the socio-religious influences of Islam and Christianity on one another. Such cultural stories include djinn stories told by native speakers, as well as episodes of visitations of Muslims and Christians to the cults of Christian saints, and consultation of soothsayers by Christians. Furthermore, aspects of daily life such as procedural texts, instructions, directions and conversations are also included. It documents the socio-cultural practices of the Turoyo speaking community mainly in Tur ‘Abdin.

Further information on the Documentation of the Beth Qustan Dialect of the Central Neo-Aramaic language can be accessed on the ELAR blog comprising an article authored by Mikael Oez following the fieldwork undertaken in Gütersloh and Kirchardt in Germany.

The collection created within this project focuses on speakers of the Beth Qustan dialect of Neo-Aramaic of the Beth Qustan village of Tur ‘Abdin in South Eastern Turkey, who have immigrated and settled in diaspora. These are among the last remaining inheritors of the Aramaic language, which was the lingua franca from ca. 600 BC until 200 BC. It was the official language of the Achaemenid Persian dynasty in 559-330 BC. The Aramaic language was replaced by Greek following the conquests of Alexander the Great, who reigned in 336-323 BC, and it became the official language throughout the former Persian Empire. Nevertheless, the Aramaic language continued to be widely used until it was replaced by Arabic in ca. 650 AD.

All Aramaic dialects are now in danger of extinction as most speakers of the Aramaic dialects have been forced, for many reasons, to abandon their original homelands and they have settled in diasporas over the last few decades. The younger generations of these communities are increasingly losing competence in these dialects due to their newly adopted homeland, culture and language.

There are at least a couple of dozen Neo-Aramaic dialects that originated from Tur ‘Abdin which have yet to be documented and archived. Unless these dialects are documented, prior to losing the generation of native speakers, which will perish by 2025, we will find ourselves deprived of all invaluable knowledge on their culture and traditions. The Aramaic civilisation goes back more than 3000 years, but it has not been preserved, nor comprehensively documented. Because many speakers of Central Neo-Aramaic dialects have been forced to emigrate, most of the dialects are now in danger of extinction. It is, therefore, an urgent task for Semitic philologists to study and document the dialects while competent speakers can still be located, and before they are extinct. Most Aramaic dialects have no writing system. Although the best writing system cannot represent the richness of a spoken language, it has the ability to communicate across long distances and through time. We have the technology and equipment today to capture this fascinating civilisation at a very low cost. We do not, however, have time on our side.

The Modern Aramaic language of the mountainous region of Tur ‘Abdin (literally in Syriac, ‘the mountain of worshippers’), South Eastern Turkey, is known to its native-speakers as Surayt or Turoyo, that is, ‘the language of the Tur ‘Abdin’. It belongs to the Central Neo-Aramaic (CNA) language group. This group of languages is sometimes referred to as North Western Neo-Aramaic (NWNA).

The Turoyo dialect of Central Neo-Aramaic is been spoken by Christians living in Tur ‘Abdin and the surrounding areas. Vernacular dialects are, by definition, not written down (until modern times). It is only recently that scholars have started to look for evidence of its earlier use. Therefore, it is rather difficult to ascertain precisely how far back Turoyo was being spoken as a distinct language. Turoyo is related to the North Eastern Neo-Aramaic (NENA) dialects spoken by other ancient Christian and Jewish communities of Eastern Turkey, Northern Iraq, and North Western Iran. Speakers of CNA cannot easily understand speakers of NENA.

Other languages sporadically included in the material are Syriac, German, Kurdish, Turkish and Arabic.

There are several special characteristics in the Beth Qustan dialect such as the unique addressing of the feminine gender of weak verbs with a final root consonant /y/. Furthermore, a noticeable unique phenomenon in phonology is the alteration of the interdentals /ṯ/ and /ḏ/ to the sibilants /s/ and /z/. This phenomenon is only attested in another Central Neo-Aramaic dialect, Mlaḥso, in the district of Diyarbakir, South Eastern Turkey.

Nevertheless, there is currently a fierce debate in some parts of the diaspora over the question of which script should be used to write Turoyo – the traditional Syriac alphabet of 22 consonants and 5 vowels, written from right to left, or a modification of the European ‘Latin’ alphabet, written from left to right.

In my opinion, there is no need for resentment, hostility, and confrontation. The glory of Classical Syriac will never diminish. It is the language of the Scriptures and of the liturgy of the Syriac churches; it is the literary language of the Syriac intelligentsia and has been chosen and used by the greatest writers, poets, and thinkers among the Aramaic-speaking people. The status of the Syriac script is guaranteed by its continued use in the liturgy. The language will not be threatened by the adoption of the Latin script for Turoyo. The Latin alphabet is more familiar than any other alphabet for members of the Syriac communities, both in Tur ‘Abdin and in the diaspora. Therefore, the use of the Latin alphabet would greatly help their learning of the language, and will also encourage them to use Turoyo in written communication: letters, emails, SMS texts and social media.

A modified Latin alphabet has been used to transcribe the recordings of this documentation. The specific alphabet used was designed for Oez Mikael, Modern Aramaic in Practice: Turoyo: The Language of Tur ‘Abdin, Modern Aramaic Press 2014. Click here to view the Alphabet and its Pronunciation (http://hdl.handle.net/2196/00-0000-0000-000F-FBE2-B) consulted for the transcriptions of this project.

The deposit comprises 608 bundles of the Beth Qustan dialect that reflect spontaneous language use in the form of monologues and dialogues. Even though the fieldwork was undertaken with the diaspora community in Germany, the recordings have captured socio-cultural practices common for the community in the Beth Qustan village, with a wide range of themes such as legendary stories traditionally told at village gatherings, historical narratives, personal stories, explaining food produce, e.g. of raisins, and the sophisticated culinary art of cooking cultural food.

Each bundle contains a video and an audio recording with picture(s), ELAN files, and PDF documents with interlinear glossing (in the case the transcriptions have been further annotated in FLEx) and consent forms. The total length of the videos is 26 hours. Even though not all the video recordings in the Beth Qustan deposit have been transcribed, they have all been segmented in ELAN and are available to be openly accessed by any users of ELAR, without restrictions, for transcriptions and/or for further research and analysis. The main reason behind the segmentation of all recordings lies in their future usability. Six and a half hours of the recordings have already been transcribed, and more than three hours have been provided with free translations in English and are fully annotated (morphologically).

All the materials are openly accessible, without any kind of restrictions, in the online catalogue of the Endangered Languages Archive, ELAR.

The data for this deposit was collected during the postdoctoral research of Mikael Oez, the principal investigator. The data was collected in August and September 2016, when Mikael Oez went on fieldwork in Gütersloh and Kirchardt in Germany.

Users of any part of the collection should acknowledge Mikael Oez as the principal investigator, the data collector and the researcher. Users should also acknowledge the Endangered Languages Documentation Programme (ELDP) as the funder of the project. Individual speakers whose words and/or images are used should be acknowledged by respective name(s). Any other contributor who has collected, transcribed or translated the data or was involved in any other way should be acknowledged by name. All information on contributors is available in the metadata.