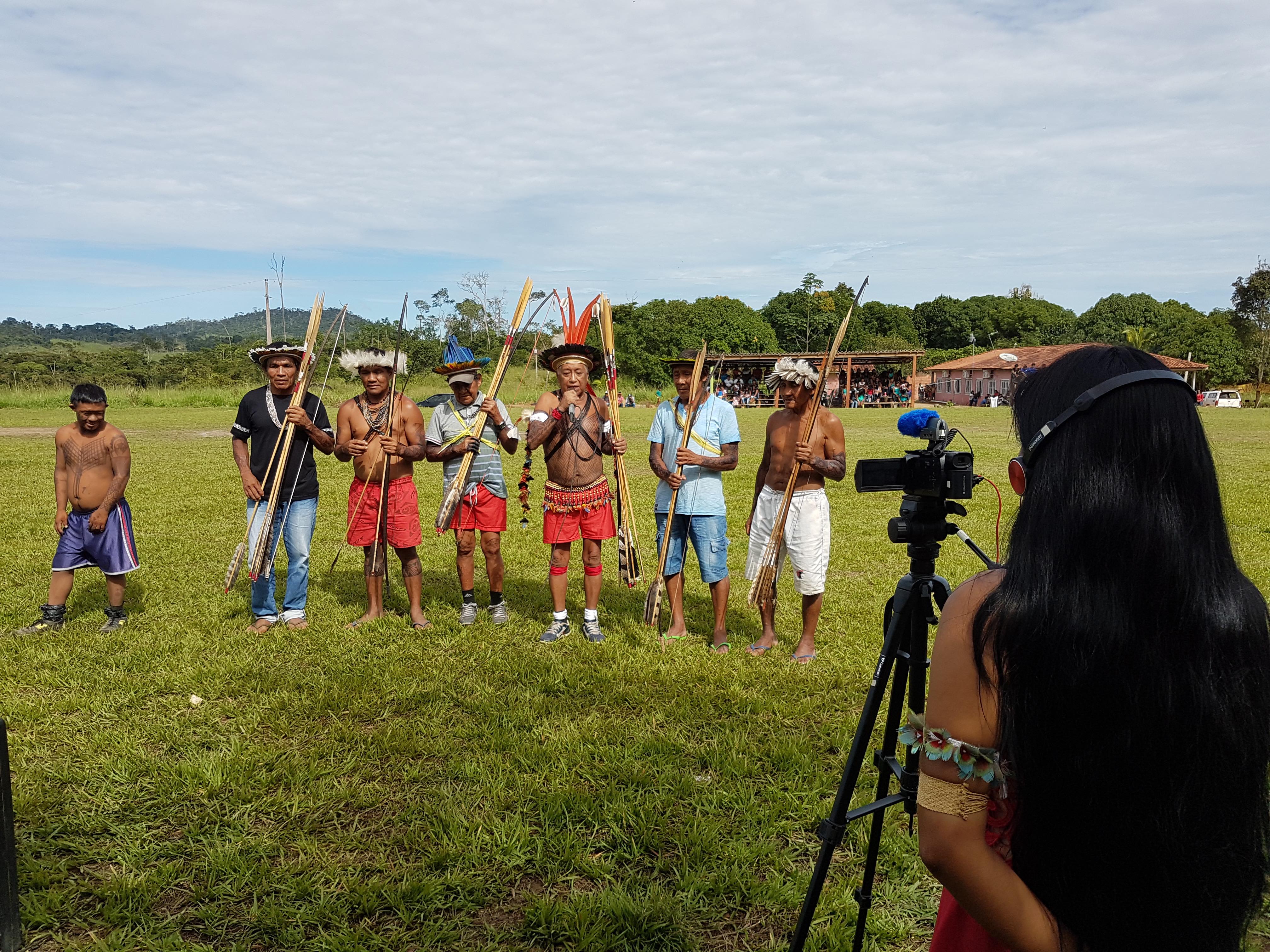 Deposit page image for the collection ’Language documentation with a focus on traditional culture among the Gavião and Suruí of Rondônia’. Click on image to access collection.

The goal of the present project is the documentation of Gavião and Surui, two Mondé (Tupian) languages of Eastern Rondônia, Brazil. The project with provide support and technical assistance for these two groups to carry out the documentation of their traditional culture and the associated language. The recordings will be made available both to the native communities, constituting an encyclopedia of traditional knowledge, and to the general public, including interested researchers.

According to the classification by Moore (2005), the Mondé branch of the Tupi family can be divided into three languages: (1) Surui, (2) Salamãy, and a language composed of four mutually intelligible dialects: Gavião, Zoró, Cinta Larga, and Aruá. There are now about 1200 Surui and 550 Gavião. They all speak the language but everything that is relevant to traditional culture is disappearing from it.

The Mondé branch of the Tupi family is the only branch with both distinctive tone and length. Nasalization spreads to the right in Gavião and Zoró, under rather complicated conditions. The Gavião syntax likewise proved to have typological features that had not been previously described in other Tupian languages, for example, multiple independent VPs; an elaborate system of auxiliaries that mark tense, aspect, mood, and sentence functional type; an absence of adverbs or postpositions as distinct word classes, and an elegant system of bar-one constructions. Surui syntax appears to be similar in many of these traits.

Horst Stute of the New Tribes Mission began work with the Gavião in 1966. Moore began research on the language in 1975 and soon concluded that it had distinctive tone and length. Stute attempted a technical description of Gavião (1985, 1986, 1987). The SIL linguists who were with the Surui since 1969, Willem and Carolyn Bontkes, likewise did not detect that Surui was a tonal language. Eventually the Bontkes recognized two distinctive tone levels and distinctive length and produced some preliminary linguistic papers (1974, 1975, 1978, 1985, 1988). Their missionary colleague, Tine van der Meer, produced preliminary work (1981, 1982, 1983, 1985). Mariana Guerra, under the orientation of Didier Demolin and Moore, completed a phonetic study of Surui (2004). Ismael Tressmann (2000) carried out a preliminary study of Cinta Larga. Moore completed a description of Gavião syntax (1984) and returned to Brazil to work at the Museu Goeldi, a research institute of the Ministério de Ciência, Tecnologia e Inovação in Belém, Pará. While there he has continued, when possible, his research on the Gavião language and the languages and dialects of the Mondé branch (1985, 1989, 1995, 1997, 1999, 2005, 2006). In recent years Julien Meyer, partly supported by ELDP, carried out pioneering research on whistled and instrumental speech among the Gavião and Surui, in partnership with Moore (Meyer 2011, Meyer and Dentel 2011).

In 2002 Moore and some of his former students and an affiliated linguist formed the Tupi Collective for the diachronic study of the Tupi family. The members and branches are: Moore (Mondé), Luciana Storto (Arikém), Vilacy Galucio (Tupari, Puruborá), Gessiane Picanço (Munduruku), Sebastian Drude (Aweti), Nilson Gabas Jr (Ramarama), Carmen Rodrigues (Juruna), and Sérgio Meira (Mawé). Reconstruction by the comparative method is currently proceeding mainly within the branches. Later branch-level reconstructions will be compared to reconstruct Proto-Tupi, which was spoken perhaps 4-5,000 years ago. A recent joint effort of the Collective is a phylogenetic study of the Tupi family (to appear).

Moore (2006) has done a preliminary reconstruction of Proto-Mondé consonants and vowels and has worked out correspondences in tone/length among Gavião, Zoró, and Surui. The state of knowledge of the Mondé languages is still incomplete, with no published grammar, no sizeable dictionary or text collection, and only limited reconstruction of Proto-Mondé. There is no systematic modern digital documentation of these languages except for that done by Moore for the two remaining semi-speakers of the Salamãy language, and that done by Meyer for special speech forms among the Gavião and Surui. Both projects were supported by ELDP.