Nubian languages: an archive of language and cultural material from Nubia 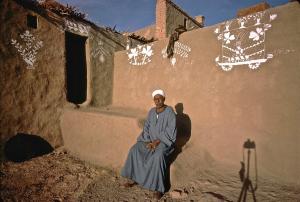 Deposit page image for the collection ’Nubian languages: an archive of languages and cultural material from Nubia’. Click on image to access collection.

The Nobíin Nubian language has a rich literary history, having appeared in a mainly Greek/Coptic-derived writing system from the eighth century to the early fifteenth century (making it one of the oldest alphabets in Africa). The rediscovery of the mediaeval Nubian alphabet in the late nineteenth century and impressive creation of grammars, dictionaries and collections of texts in the late twentieth centuries have supported the revival of this historic alphabet. However, it is still only used by a small number of enthusiasts.

Nubian languages are also spoken to the west of the Nile, especially Ajang in the Northern Nuba Mountains and Midob (Tiddin Aal in northern Darfur). There are Nubian communities of the diaspora in the UK, the USA, the Netherlands and the Arab world.

The documentation is the primary repository for the toponymic nomenclature of Nile Nubian.

The data will document many aspects of Nubian languages. Initially, the data (which will be of varying formats) seeks to document the endangered toponymy of the Nobíin Nubian language (ISO 639-3 fia) of southern Egypt/northern Sudan. Since the 1960s, there has been continuous forced migration of the Nubian people, and the resulting loss of their homeland has directly caused the severe endangerment of their toponymy and its related socio-cultural knowledge. The primary outcome of this documentation will be the creation of open access toponymic data which will be in three endangered languages: Nobíin Nubian, Andándi (Dungulāwī) Nubian and Kenzi Nubian. This investigation of toponyms aims to provide a much deeper insight into Nubian concepts of their traditional environment. The data of toponyms will be recorded and interpreted from songs, stories, descriptions of sacred and historic places, biographies and accounts of the variety of ways that Nubians interacted with their traditional lands. Toponyms are interpreted from multiple perspectives reflecting Nubian society and Nubian perceptions of their cultural heritage. The documentation will consist principally of Nubian language texts. Hitherto, most of the information on Nubian toponyms has been filtered through other languages, especially Arabic, with resulting distortion.

The data will document three endangered languages: Nobíin Nubian, Andáandi (Dungulāwī) Nubian and Kenzi Nubian, and hopes to include a fourth Nubian language, Ajang, of the Nuba Mountains in Western Sudan (Southern Kordofan). Further specific areas of Nubian documentation will be uploaded when available.

Prof Bell has been involved in the collection of Nubian toponyms since 1962. He earned a PhD in Nubian toponymy in 1968. He has published analyses of Nobiin Nubian toponymy with attention both to their philological and their sociolinguistic features. He has conducted fieldwork on all the Nubian languages including two which are now extinct (Birgid in Darfur and Haraza in northern Kordofan). He is an active member of the Working Group on Exonyms on the United Nations Group of Experts on Geographical Names and published articles on Nubian toponymy with them each year. He has maintained close contact with the principal Nubians who are actively trying to revitalise their languages both in the Nile Valley and in the UK. In 2011, he was invited to speak at the First International Festival for Nubian Culture held in Sudanese Nubia near the submerged town of Wadi Halfa. He was a Sudan Expert for the United Nations Group of Experts on Geographical Names (UNGEGN) from 2000-2007 and a Consultant for the National Committee for Geographical Names, Sudan 2000-07. He has been a member of the UNGEGN Working Group on Exonyms since 2007.