A documentation of Bati language and oral traditions 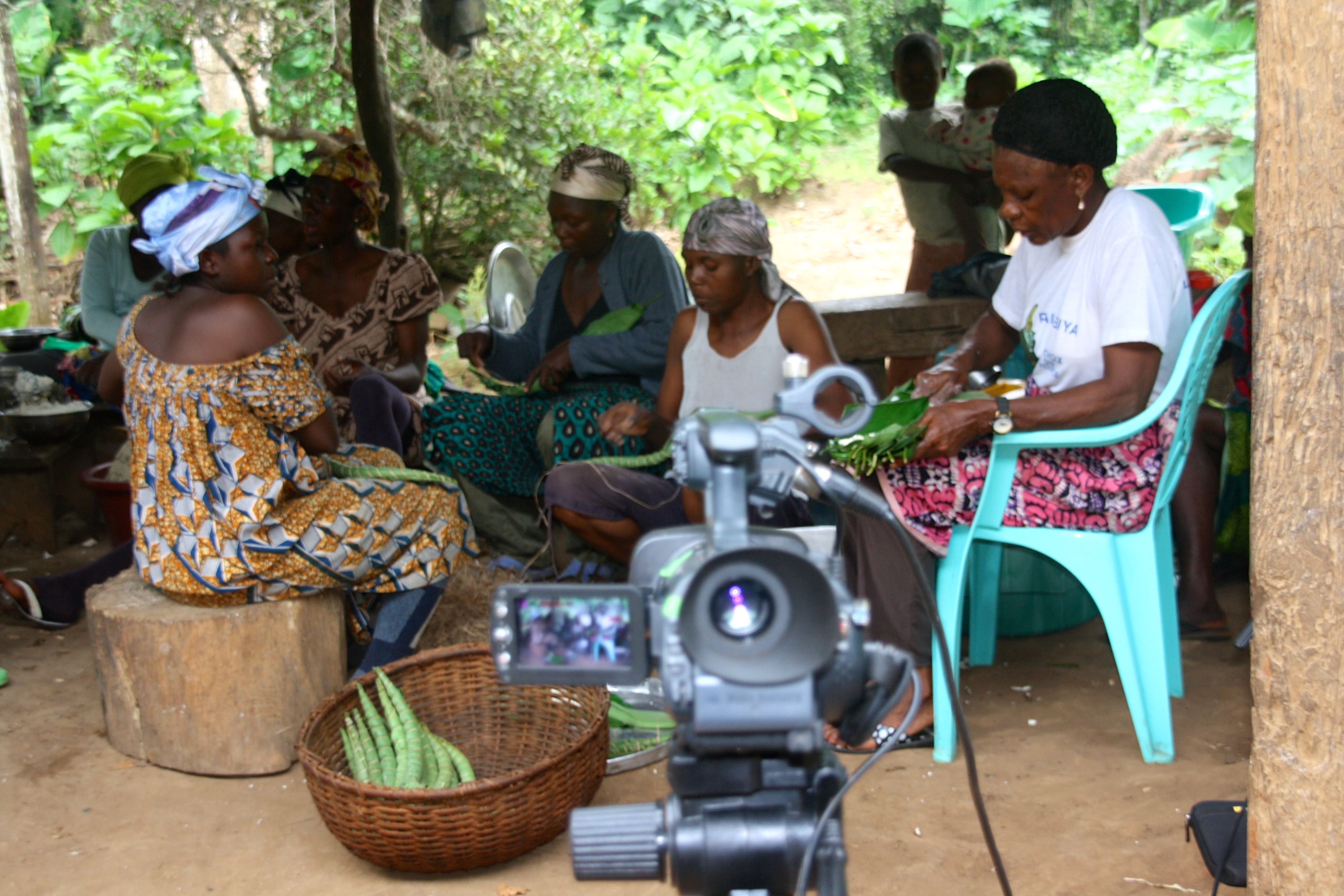 Landing page image for the collection ’A documentation of Bati language and oral traditions’. Click on image to access collection.

The collection comprises multimedia documents for five distinct languoids (we use the term ‘languoid’ instead of ‘language’ because according to us, the latter does not reflect the fluidity with which language resources circulate from one named language entity to the other). These languoids are: Kelleng, Mbougue (which is also referred to as Mpaage), Nyambat, Mbaa, and Ndog Bikim. In most recordings, Basaa is used as a vehicular between the informants and the researchers. Bisoo also features in recordings made in Kelleng village as a result of inter-ethnic marriages between the Bisoo and the Kelleng communities.

Even though the title of this collection suggests that the data in the recordings belong to the ‘Bati language’, this is only partly true. For the sake of coherence, we have kept the original title of the project as the title for our collection. However, the collection actually represents five distinct speech groups namely Kelleng, Mbougue (or Mpaage), Nyambat, Mbaa and Ndog Bikim. We use the terms ‘speech groups’ instead of ‘dialects’ or even ‘languages’ to reflect the perception that each of these groups has of their identity. When, for example, a speaker of Kelleng village is asked to tell which ‘language’ he or she speaks, the answer is unequivocally this: ‘I speak Kelleng’. The same is true of the other four speech groups. Only in exceptional circumstances, perhaps to accommodate an outsider’s opinion, would Kelleng, Mbougue or Nyambat speakers state that they ‘speak Bati’. Among these five groups, three groups namely Kelleng, Mbougue and Nyambat claim a same ethnic identity which is ‘Mbangele [mbǎŋgélɛ̂]’. Quite remarkably, the term ‘Mbangele’ is never used to refer to language use. Personally, I (the Principal Investigator) did never hear about such wording as ‘I speak Mbangele’. In the same token, Ndog Bikim (the inhabitants of Ndog Bikim village which is the fourth village of the Bati Canton in addition to Kelleng, Mbougue and Nyambat) whose variety is closely related to Basaa, claim a ‘Bati’ and sometimes ‘Mbangele’ identity when asked to state it overtly. Even though Ndog Bikim inhabitants speak Basaa and in spite of the fact that they do not speak any of the three varieties of ‘Bati’, they still believe to be ‘Bati’ or ‘Mbangele’ on ground that they belong to the same administrative unit as the other ‘Bati’ people. Ironically, the ‘Bati’ identity is not fully recognized to the Ndog Bikim by either the Kelleng, the Mbougue, or the Nyambat because the Ndog Bikim were not historically part of the core ‘Mbangele’ community; they have been bestowed a Mbangele identity following their attachment to the ‘Bati’ Canton. It is also worth mentioning that the name ‘Bati’ is not inherently an indigenous appellation to the Mbangele community. According to five elders of Kelleng whom we interviewed, the name Bati was given to them by the Basaa. As a matter of fact, the Mbangele are called ‘Bati ba Nong [ɓàtí ɓá ŋɔ̀ŋ] by the Basaa. This appellation means roughly ‘the Bati of the savanah’ (‘ŋɔ̀ŋ’ refers to a stretch of land devoid of trees with or without grass; it may therefore apply both to the savanah and the desert, in Basaa). The implication behind this naming is that there exist other ‘Bati’ elsewhere than in the savanah. Indeed, the ‘Beti’ group (Guthrie 1971’s A70) is called ‘Bati’ in parts of the Basaa territory, especially in the Nguibassal sub-division which share borders with the Evodoula subdivision. The Evodoula subdivision is inhabited by the Eton community in the Lekie Division, Center Region in Cameroon. Mbaa is another speech group that is represented in the collection. The Mbaa community is located in only one village called ‘Mbay-Bati’ which literally means ‘the village of the Bati’ in Basaa (Basaa is a major vehicular in the broad Sanaga Maritime Division in which the Mbaa, the ‘Bati’, the Bisoo and parts of the Basaa groups belong). The village is at the juncture of the Bisoo, the Basaa, the Bati and the Ndog Bikim (if we consider them to be a separate speech group) communities.

Bati is a generic naming for three languoids (see Cysouw & Good 2013 for a definition of the term ‘languoid’) which may be considered either as dialects of the same language or distinct languages depending of the criteria being put forward. For example, the Administrative Atlas of Cameroonian Languages (Binam Bikoi 2012) groups these three languoids as dialects of the same language allegedly on the basis of their lexical similarity. However, speakers of the three varieties identify themselves as belonging in three separate languages namely Kelleng, Mbougue and Nyambat.

Either grouped together as one language or as separate languages, the three languoids which have been the main focus of our documentation belong in the Yambasa subgroup of Guthrie (1971) ‘s Bantu A.

The number of Bati speakers is estimated at 800 even though the present (year 2019) population which inhabits the three villages does not exceed 200 individuals.

Other languoids which have been documented along with Bati are the following: Basaa, Mbaa and Ndog Bikim. In the Cameroon context, Basaa is a well-known Bantu language belonging to Guthrie (1971)’s Group A and bearing the code A40. Mbaa is not mentioned in any existing literature; it is a languoid spoken by a small (less than a hundred individuals) group that inhabits a village called Mbay Bati. Mbaa is not entirely intelligible either to its southern neighbors the Bisoo to which they have been mistakenly assimilated by the administration or to the Basaa, their Northern and Western neighbors, whose language all Mbaa speakers that we have met speak fluently. At the time of submission of our project proposal to ELDP, we had reported Mbaa to be one of the dialects of Bati simply on the basis of the resonance of the official name of the village where the languoid is spoken. This assumption has turned out to be wrong as the Mbaa people vehemently deny any kinship with the Bati. We hope that the documentation work we have achieved on Mbaa will grant official and scientific recognition to the group who speaks it. The case of Ndog Bikim is a little bit tricky. As a village, Ndog Bikim is part of the Bati Canton on an administrative basis. Seemingly as a result of a historical process of identity construction, inhabitants of Ndog Bikim village claim a Bati identity even though neither of the three sub-varieties of Bati is naturally intelligible to them. As a language variety, Ndog Bikim is much closer to Basaa and indeed is naturally intelligible to the Principal Investigator (Emmanuel Ngué Um), the Co-applicant (Emmanuel-Mosely Makasso), and one of the team members (Marguérite Gwladys Makon) who are all native speakers of Basaa.

The collection is special for its multilingual nature: seven different languoids feature in the recordings. In the naming protocol of the files, the initials are an abbreviation for the names of the languoid mainly represented in the media file. Thus ‘Kell’ stands for ‘Kelleng’, ‘Mba’ stands for ‘Mbaa’, ‘Mbo’ stands for ‘Mbougue’, ‘Ndob’ stands for ‘Ndok Bikim’ and ‘Nya’ stands for ‘Nyambat’.

Basaa is present throughout the collection because it has been used as the medium for elicitation and interviewing.

Bisoo features mostly in the data collected in Kelleng which involves women’s work. This is so because a number of women who are part of this work group originate from the neighboring Bisoo community.

Perhaps the ground-breaking contribution of this collection to linguistic research is the provision of first hand, authentic and naturalistic data on Mbaa, a hitherto undocumented languoid.

The data which is contained in the collection may be described by data type or by content. In terms of data type, the collection comprises video, audio, text (speech to text annotated) and image files. At this point in the process of depositing, it is difficult to state exact figures for each data type. Details about the exact number and duration (where applicable) of each data type will be given when the depositing process is completed, in any case by the end of 2019. Roughly, however, the collections averagely contains 100 hours of both video and audio taken individually; there is about 50 hours of annotation files (ELAN files).

The contents of the collection are the following:

– interviews about the history of the community (video and audio) ;

– interviews about the ethnography of the community (video and audio) ;

The data for this collection was gathered between November of 2015 and August of 2018. During the first year of the project, the research team undertook five field trips in Kelleng, Mbougue, Nyambat and Ndog Bikim villages in the Bati Canton, and Mbaa village in the Bisoo Canton. All five villages are found in the Nyanon Subdivision, Sanaga Maritime Division, Littoral Region in Cameroon.

During the first year (November 2015 to October of 2016), data collection was mainly carried out in Kelleng village. Only sample recordings were made in the other villages. The bulk of the data collected during year one involved lexical and grammatical elicitation, common expressions, interviews with elders of Kelleng village and spontaneous use of language repertoires among women during group work.

During year two, three field trips were undertaken between February and September of 2017. More data was collected in Kelleng village. Additional data was gathered in Mbouge (Mpaage), Nyambat and Mbaa villages. In Kelleng, further group working sessions involving women were recorded as well as ethnographic interviews involving elderly women. Grammatical elicitation was carried further mainly by Marguérite Gwladys Makon both in Kelleng, Mbougue and Nyambat for her PhD research. During the same year, sociolinguistic surveys were carried out by Célestine Ghislaine within the framework of her PhD research. Sociolinguistic surveying was subject to very limited recording; this is why only few data for sociolinguistic research is found in the collection. As concerns the Mbaa languoid, data collected included interviews, the counting system, lexical elicitation and language use.

On the last year of the project, data was collected only in Nyambat and Mbaa. Focus on Nyambat aimed at filling the balance gap between data content for the Nyambat variety: spontaneous speech was recorded as well as grammatical elicitation. As part of grammatical elicitation, cross comparison of sample lexicon and grammatical structures between Basaa, Kelleng and Nyambat was video recorded. This data is found in a node called ‘Cross-dialectal-Grammar-Elicitation’. Initially, Basaa was not a target language to be documented during the project; it was rather a vehicular used to facilitate interactions between the team members and the consultants. The decision to undertake a cross-grammatical elicitation between the three languoids was motivated by cultural reasons given that, Basaa and Bati are part of the same broad cultural group known as Basaa-Mpoo-Bati where ‘Mpoo’ stands for ‘Bisoo’ and ‘Bakoko’ in all their varieties.

The collection process is still in progress. The Principal Investigator has requested an extension period to ELDP to complete the collection. The collection will be regularly updated until the end of 2019.

Users of any part of the collection should acknowledge Emmanuel Ngue Um as the Principal Investigator, then Marguérite Gwladys Makon, Celestine Ghislaine Assomo, Emmanuel-Moselly Makasso as data collectors and Gilbert Mbessi Makondo our main informant. Users should also acknowledge the Endangered Languages Documentation Programme as the funder of the project. Individual speakers whose words and/or images are used should be acknowledged by name. All information on the contributors is available in the metadata.