Documentation and Description of the Hrusso Aka Language of Arunachal Pradesh 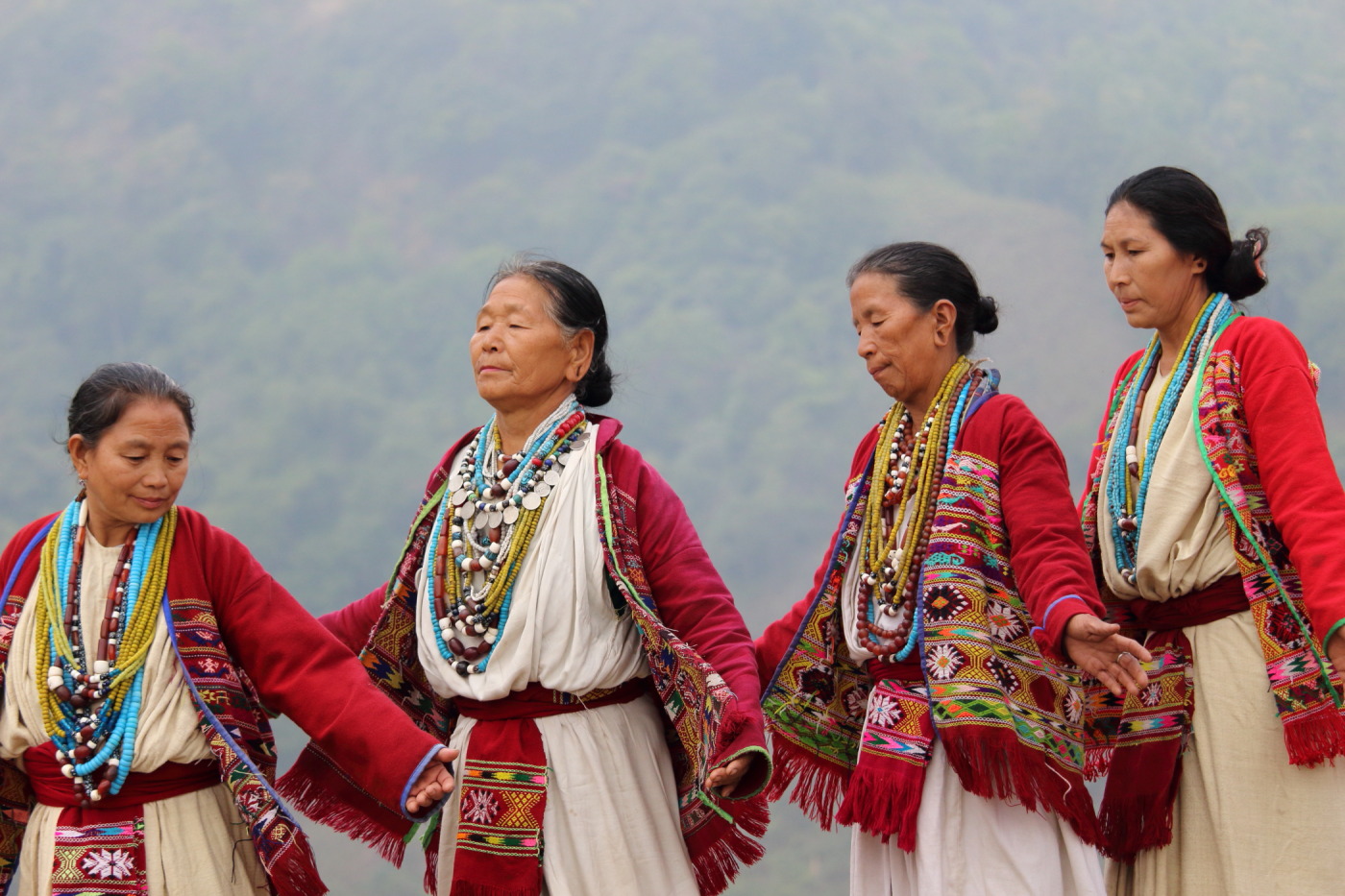 Landing page image for the collection “Documentation and Description of the Hrusso Aka Language of Arunachal Pradesh”. Click on image to access collection.

Short Description of the collection

This is a comprehensive collection of language resources in the form of Audio, video and text materials in the Hrusso Aka language of Arunachal Pradesh, India.

Hrusso Aka is an endangered language spoken by about 4000 speakers in the West Kameng district of Arunachal Pradesh, India. It has unique phonetic and phonological characteristics that make it distinct from its neighbours. It is highly endangered due to the ongoing rapid language shift to Hindi.

The collection contains a comprehensive documentation of Hrusso Aka in its current form. It represents various genres of Hrusso Aka such as conversations, narrative texts, storytelling, oral history, procedural texts, folklore, mythology, child speech, songs, dances, shamanic chanting, proverbs, riddles, and so forth.

The collection has over a hundred hours of audio and video recordings, out of which twenty hours are annotated in ELAN. This amounts to around 100,000 words of transcription, which in turn has been translated and glossed. The translation and interlinear glosses are being continually updated and improved upon.

The data here is about 70% natural language data and the rest is elicited or semi-elicited. We have endeavoured to represent all genres in the annotations. We consider natural language, messy as it is in the spoken form, as the more authentic form of Hrusso Aka, and therefore, we caution against using elicited texts for study without first studying the natural data. Elicited texts must be used as supplementary material. We have noticed that elicited texts often introduce artificial data.

It must be noted that genres such as storytelling, oral history, and biographical texts are natural texts. The observer can be easily misled into thinking that , due to the sombre and somewhat formulaic narrative style, such data is artificially enacted, but this is not so. Hrusso Akas do not smile and giggle when they narrate these genres. They sit still, often with eyes fixed on the ground, and speak in a rhythmic and somewhat monotonous style. They are solemn and respected narratives, and are told with the seriousness they deserve.

This collection is the result of constant collaboration between the principal investigator and the Hrusso Aka indigenous community. The data was collected and annotated by Vijay D’Souza, the principal investigator, and a team of Hrusso Aka community members including Dorjee Jebisow, Delu Sapon, Anu Jebisow, Hema Delusow, Düva Dususow, Ajay Parisow, Yachi Jebisow, Gebi Jebisow and many others. Throughout the duration of the project these members of the documentary team were trained in all aspects of language documentation. They participated at all stages of the documentary process, including planning, recording, annotation and feedback. The corpus we now have is the result of our collective effort. Besides these individuals, the people of Buragaon, Gijiri, Thrizino, Bhalukpong, Palizi, Ramda actively participated as narrators, storytellers, shamans, speakers, musicians, singers, dancers, language consultants and cultural experts. During the documentation period the Hrusso Aka community leaders under the aegis of their apex body, the Aka (Hrusso) Elite Society, organised two symposia, and supported the printing of a storybook and an alphabet chart. In response to this enthusiastic response from the community, we are currently training the local youths and language workers in literature development, language support, and revitalisation of Hrusso Aka.

The Hrusso Aka people
The Hrusso Aka people live in the West Kameng district of the mountainous state of Arunachal Pradesh, Northeast India, in the Himalayan foothills. Arunachal Pradesh, geographically the largest state in Northeast India, is surrounded by Assam, China, Tibet, Myanmar and Bhutan. The state is inhabited by twenty-six major tribes and has a sparsely distributed population of 1.4 million. Census of India−2011 shows its population density as 17 per km, the lowest in the country, as against the national average of 384 per km. The state had remained shielded from external influences till recently due the conscious policy of the Indian government of ‘protecting’ the indigenous tribes. Although there are still restrictions regarding entry and residence of people from outside the state, since the 1990’s the Arunachal Pradesh has been steadily opening up to the outside world. This process has brought with it new challenges in terms of language endangerment.
Arunachal Pradesh is among the most linguistically diverse states in India. According to the People’s Linguistic Survey of India of 2013, there are 780 languages india, and Arunachal Pradesh has 90. Most of these languages, including Hrusso Aka, are small, under-studied and quickly disappearing. The government policy of English medium education has made English the prestigious language of the educated elite. The recently increased contact with the outside world, the promotion and Hindi by the central and the state governments, and the access to television have firmly established Hindi as the lingua franca. A creolised form of Hindi, Arunachali Hindi, is quickly replacing indigenous languages as the mother tongue in an increasing percentage of households, and consequently, the indigenous languages of the state are being pushed into extinction.

The Hrusso Aka Language
Hrusso Aka is a little studied minority language spoken by the members of the indigenous community who call themselves Ĝusso [ɣusːo] (This is the autonym. For official purposes the community calls themselves “Aka (Hrusso)”. Alternative exonymous spellings are “Hruso Aka” and “Hruso”.) They live in the twenty-one villages located in the Jamiri, Buragaon, Thrizino, and Bhalukpong administrative “circles” of the West Kameng District. According to the 2011 census their total population is around 6,700. The number of people who actually speak Hrusso Aka can be estimated to be around four thousand.

Hrusso Aka is a fascinating language because of its unique lexicon and phonology, especially it complex consonant structure. Its affiliation is not well understood. There is some evidence to support its supposed genetic relationship with two other languages, namely, Sajolang (Miji/Dhammai) and Bangru (Levai). The three are often classified under the “Hrusish” branch of Tibeto-Burman (cf. Thurgood & LaPolla 2007, Anderson 2014, Bodt & Liberherr 2015). Genetic affiliation of Hrusso Aka has been difficult to establish in the absence of reliable data from the three Hrusish languages. With the conclusion of the two ongoing studies of Hrusso Aka (Vijay D’Souza, PhD on Hrusso Aka phonology) and Sajolang (Christopher Weedall, PhD on Sajolang grammar), it is hoped that more reliable data will be available for research on this topic.

There is some confusion about the dialects of the language, for example, Shafer’s (1947) misleading identification of “Hruso A” and “Hruso B” dialects, based on his study of limited data sets provided by Anderson (1896), Campbell (1874), Hesselmeyer (1868) and Payne (1909). These “dialects of Hruso” were in fact two different languages, Sajolang and Hrusso Aka, respectively. At times Koro Aka, a neighbouring language, has been called a dialect of Hrusso Aka (cf. Sinha 1962). However, Koro is a different language having no genetic affiliation with Hrusso (Anderson & Murmu 2010).

Two varieties of the language are recognised by the native speaker community. These varieties and the people who speak them are informally referred to as Hushüñ [xu̥ʂɨɲ] and Ĝusso [ɣusso] respectively, but the terminology is contentious. Therefore, although the difference between the two is widely recognized, they have not been officially named as such by the Hrusso Aka community. The former is spoken by people in the Thrizino circle; and the latter by those in the Bhalukpong and Jamiri circles. The term Hushüñ refers to people on the northern side of the Bichom river. Ĝusso [ɣusso], is the word from which the name “Hrusso” is derived. Apart from being the autonym for the entire tribe, it informally refers to the clans that live on the southern side of the Bichom river. The two varieties are very close to each other in lexicon, phonology, grammar and prosody, and have almost complete mutual intelligibility. One noticeable difference is the fronting of the fricatives /ʃ/, /ʒ/, /x/ and /ɣ/ in Hushüñ . The two have further sub-varieties with minor differences, mainly due to village-level lexical and prosodic peculiarities. This documentary data contains materials from both varieties. (The term “dialect” is problematic and contentious in Northeast India, hence the term “varieties”).

The most important feature of this collection is the wide-ranging variety of its contents. From the most solemn storytelling to a free-flowing teen banter; from shamanic chants to children’s chatter, we hope that it represents Hrusso Aka in all its richness.
Collection History

Two large chunks of data for this collection were collected in 2016 and 2017, during the DPhil research fieldwork trips by Vijay D’Souza, the principal investigator. After that, the members of the documentary team, especially Dorjee, Anu, and Yachi and Yaniam collected large amounts of data which was deposited in 2019. Dorjee Jebisow started transcribing and translating the data in 2016 and continued to do so through 2019. Anu Jebisow, starting in 2017, transcribed nearly 80% of all the annotated data. Yachi Jebisow joined the team in 2018 and assisted in interlinear glossing. Chukhu Yaniam, assisted in translating large amounts of transcribed material in 2019. The data collection and annotation are still ongoing, and the collection will be continually updated.

This is primarily a linguistic collection meant for the study and promotion of Hrusso Aka language. Its primary purpose is linguistic, and not anthropological, cinematic, sociological, religious, or legal. The data are collected, curated and annotated according to the current best practices in the discipline of documentary linguistics. The stories, mythological narratives and oral histories found here are the versions of their narrators and we do not claim that they are the only or the most accurate versions. No data found in this collection may be used as evidence in court.

The collection has over a hundred hours of audio and video recording, of which 20 hours have been annotated. Annotations in formats such as ELAN, Praat, pdf or text data are being continually updated and we do not claim full accuracy of these at present. One is strongly advised to contact the principal researcher before using these data.

Users of any part of the collection should acknowledge Vijay D’Souza as a principal investigator. Users should also acknowledge the Endangered Languages Documentation Programme as the funder of the project. Individual speakers whose words and/or images are used should be acknowledged by name. Any other contributor who has collected, transcribed or translated the data or was involved in any other way should be acknowledged by name. All information on contributors is available in the metadata.

The depositor wishes to acknowledge the following persons:

The people of Buragon (Hulübro) village for their enthusiastic support and participation.