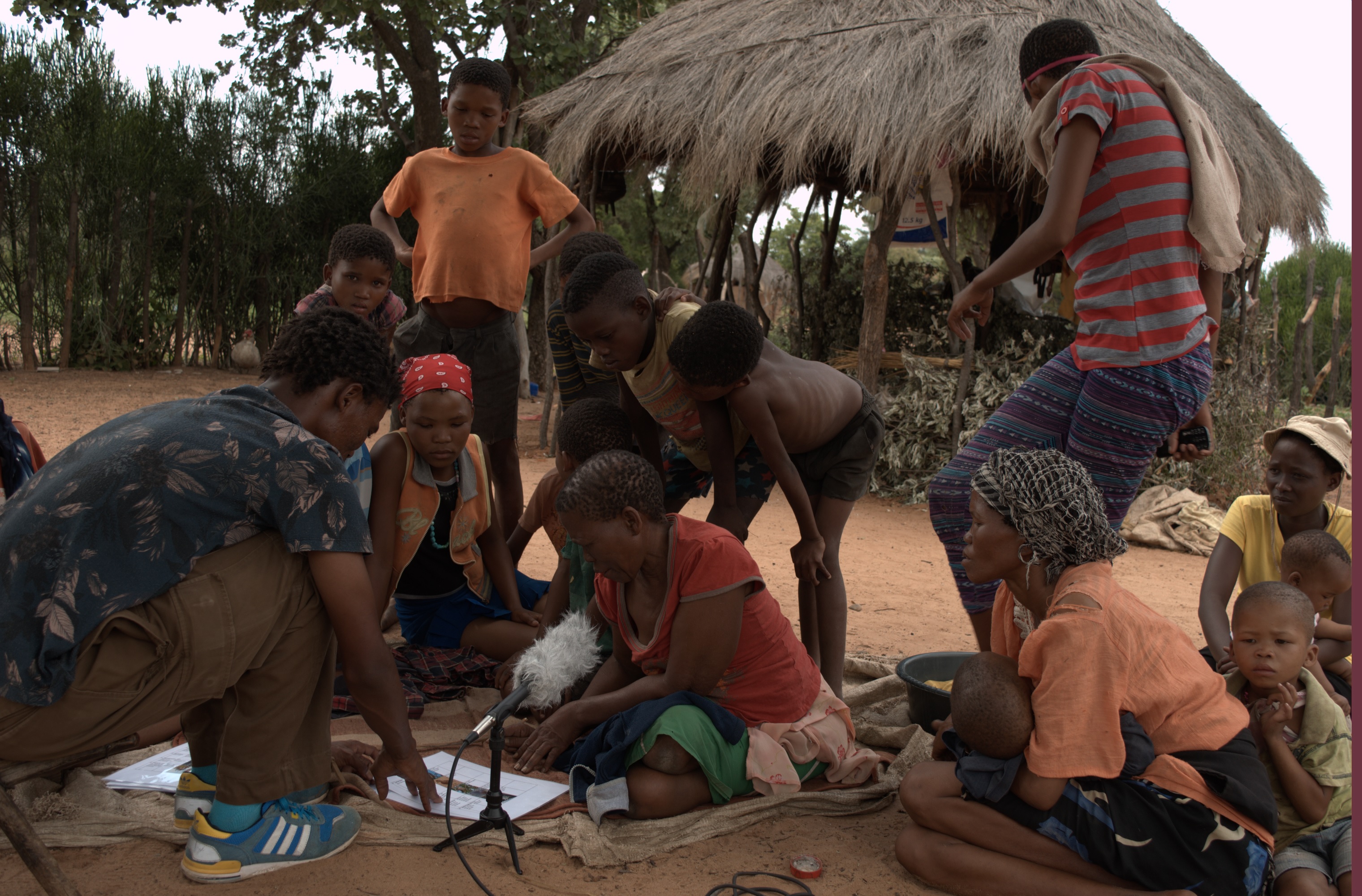 Landing page image for the collection “Documentation of San Varieties of the Western Sandveld”. Click on image to access collection.

Project Profile: A discourse-based documentation of San varieties in the Western Sandveld Region

The Western Sandveld Region, in Central District, Botswana, is host to several highly endangered and unrelated ‘Khoisan’ languages spoken by San foragers of the Kalahari. Furthermore, ethnographic references from the 70s suggest completely undiscovered languages may still exist in the region. This project focuses on the documentation and description of Tshwa, a barely described East Kalahari Khoe language of the Khoe-Kwadi family (approx. 900 speakers). The project aims to create a diverse and culturally rich corpus of natural discourse, and a sociolinguistic study to shed light on the linguistic heritage of this part of the Kalahari.

Tshwa is highly endangered and no longer transmitted by the parent generation (Chebanne 2008; UNESCO www.unesco.org/culture/languages-atlas/r). Sociolinguistic research in Botswana shows that “speakers of the languages of Eastern Khoe [i.e. Tshwa] are now adopting Setswana and Ikalanga even in family communication situations … [t]his is a serious situation of possible language extinction” (Chebanne 2008: 106). Speaker numbers are estimated to be between 800 and 900 speakers (World Atlas of Languages in Danger; Ethnologue.org), although it is unclear if this represents any real linguistically homogeneous group. Since 1986, the San, including Tshwa communities(Hitchcock et al. 2006: 14) have forcebly undergone a painful eviction process from their ancestral land in Central Kalahari Game Reserve. The effects of resettlement, poverty, and stigamatisation, have resulted in a loss of spiritual, cultural, and natural resources (Ingstad and Fugelli 2006: 68ff). These conditions plus the fact that available statistics for speaker numbers are not founded on any solid linguistic definition of language/dialect, means that speaker numbers are likely to be a fraction of what is claimed.

This project focuses on the San varieties of the Western Sandveld Region of the Kalahari, Botswana, a small area of great linguistic diversity. Languages from two of the three ‘Khoisan’ language families are found here, all of them endangered. These include =’Amkoe varieties, a moribund language cluster (LC) of the Kxa family, and Tshwa varieties,a LC of the Khoe-Kwadi family. In addition to Tshwa varieties that may exhibit considerable diversity at least phonologically (Vossen 1997, 2013; Traill 1978), there is even the possibility of an undocumented and mutually unintelligible language community living amongst the Tshwa (Valiente-Nouailles 1993).

There has been virtually no systematic documentation of Tshwa. Vossen (2013: 407) notes “reliable information on the syntax of Tshwa languages is practically non-existent”. Similarly, he remarks that the Tshwa data is “too meagre” to adequately describe tense/aspect (ibid.: 234) and that information on tone is “extremely scant” (ibid.: 104). Research involving Tshwa has often been limited to specific disciplines or studies, for example phonology, and even then, these studies have focused on Tshwa varieties further afield than the terrain set out in this proposal (cf. Chebanne 2007 for Cire-cire. In his fieldwork in the Western Sandveld Region in the 60s and 70s, Valiente-Nouailles, gives explicit details of language communities living alongside the Tshwa that cannot be understood neither by the Tshwa nor any of the other local San language communities (1993: 9ff). This makes the documentation of San varieties of the Western Sandveld of major interest, not least of all due to the value of Tshwa documentation to the understanding of the Khoe-Kwadi family, but because these already fragmented communities may hold the potential to reshape our understanding of the linguistic diversity of the indigenous peoples of the central Kalahari.

This project follows 11 months field work experience documenting varieties of the Ju branch of the Kxa family as part of the depositor’s PhD project. This includes analyses of Ju dialects and unrelated Khoe-Kwadi language Naro to demonstrate complex historical language contact in the Kalahari Basin (Pratchett 2013). The depositor also has solid experience working with Taa varieties (Tuu family), which includes a dialectometric study of East !Xoon and West !Xoon dialects(MA thesis, 2011), and he continues to transcribe East !Xoon data for the Kalahari Language database.

This project aims to describe the San language varieties of the Western Sandveld, focussing particularly on Tshwa varieties, and document the dynamic sociolinguistic situation, creating a rich resource on the cultural and linguistic heritage of the Kalahari San.