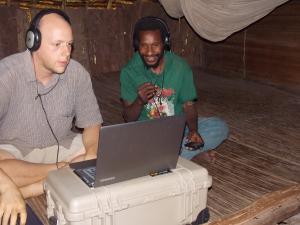 Deposit page image for the collection “The Documentation of Eibela: An archive of Eibela language materials from the Bosavi region”. Click on image to access collection.

Recordings in this deposit were collected in Lake Campbell and Wawoi Falls during the course of Grant Aiton’s doctoral fieldwork while writing a grammatical description of the language at James Cook University. These recordings include approximately 17 hours of transcribed speech from a variety of genres, including legends, oral histories, sermons, conversation, and song, as well as the associated linguistic analysis and description of these materials. An additional four hours of video recorded speech is scheduled to be added from 2019 to 2021.

Eibela has approximately 300 speakers living primarily in Lake Campbell in Western Province, Papua New Guinea. Some speakers have migrated south to the nearby village of Wawoi Falls, and a handful of speakers may reside in communities north of Lake Campbell. These communities are situated south-west of Mount Bosavi along the border between Western Province and Southern Highlands Province in Papua New Guinea. Multilingualism is extremely widespread in the region, and the men and women recorded are routinely proficient in other languages spoken in the region, including Kamula, Kasua, Kaluli, and the national languages of English and Tok Pisin.

The genetic affiliation of Eibela has not been thoroughly investigated, but it is likely that it belongs to the proposed Trans-New Guinea Phylum, of the central and South New Guinea stock, since this is the classification given to the closely related language Kaluli by Wurm (1978) and Voorhoeve (1968). A lower level classification is given as the Bosavi language family in Shaw (1986). Detailed phylogenetic analysis remains difficult, mainly owing to the fact that other Bosavi languages are underdocumented. Some grammar sketches have been completed by SIL linguists (i.e. Kamula, Kaluli, Odoodee, Kasua), and extensive research in linguistic anthropology has been conducted in Kaluli communities by Bambi Schieffelin. Another related Bosavi language, Sonia is currently being documented as part of the ELDP-funded project IPF0295 taking place from 2019 to 2021. These materials documenting the Sonia language can be found in ELAR deposit 0602, “The Documentation of Sonia: An archive of Sonia language materials from the Bosavi region”.

Word classes include open classes of nouns, verbs, and adverbs, and closed classes of adjectives, demonstratives, postpositions, verbal particles, and quantifiers. Predicates in Eibela can be formed by lexical roots of nearly any word class, although only verbs may be inflected by the full range of tense, aspect, mood, and evidentiality suffixes. Complex inflectional classes of verbs feature various patterns of stem alternations and suppletive tense forms, as well as complex predicates consisting of multiple verbal roots forming a single predicate. These complex predicates may take the form of serial verb constructions or auxiliary constructions. In these constructions, only the final verbal root is inflected for predicate categories such as tense, aspect, mood, and evidentiality.

Eibela clauses may be linked together into clause chains, which include several medial clauses culminating in a fully inflected final clause.

Aiton, Grant. 2015. “Repetition and Anaphora as a Cohesive Device in Eibela Discourse.” Language and Linguistics in Melanesia 33/2: 35-44.

Eibela has not been previously described beyond small word lists by SIL researchers. These documentation materials represent the only compilation of primary recordings and linguistic analysis of the Eibela language that the depositor is aware of.

This deposit includes more than 300 bundles containing audio and video recordings of narratives, public speeches, conversations, and songs along with the accompanying transcriptions and annotations of the speech. In addition, linguistic analysis and writing, including a grammatical description, word lists, and field notes, are included, as well as audio recordings of the translation and transcription process. This deposit is still active, with new bundles being added, and annotations being continually added to existing materials.

Nearly all primary recordings include a minimum of transcriptions, translations and interlinearization in the form of pdf files of scanned notebooks with hand written transcriptions. A large portion of recordings additionally include time-aligned transcriptions from the software package ELAN, and interlinearization and morphosyntactic analysis provided as a .flextext format using the software package Fieldworks Language Explorer (FLEX). Additional documentation is provided in the form of field notebooks, a grammatical description of Eibela, and a FLEX data base of lexemes and text transcriptions.

The materials present in this deposit were collected by Grant Aiton and community assistants between 2012 and 2017 during four separate field trips to Lake Campbell and Wawoi Falls. This field work was funded by a grant from the Endangered Language Documentation Programme (ELDP) project SG0388, as well as funding from Firebird Foundation for Anthropological Research and James Cook University. Some material from this archive is also available at https://osf.io/gjdkt. Additional material is scheduled to be collected and added during the project IPF0395 from 2019 to 2021, which is funded by the ELDP and hosted by Australian National University.

Users of any part of the deposit should acknowledge Grant Aiton as the data collector and researcher. Users should also acknowledge the Endangered Languages Documentation Programme, the Firebird Foundation for Anthropological Research, and James Cook University as funders. The materials may be cited in the following format: