Documenting the Mongol Uriankhai dialect and culture of Mongolia 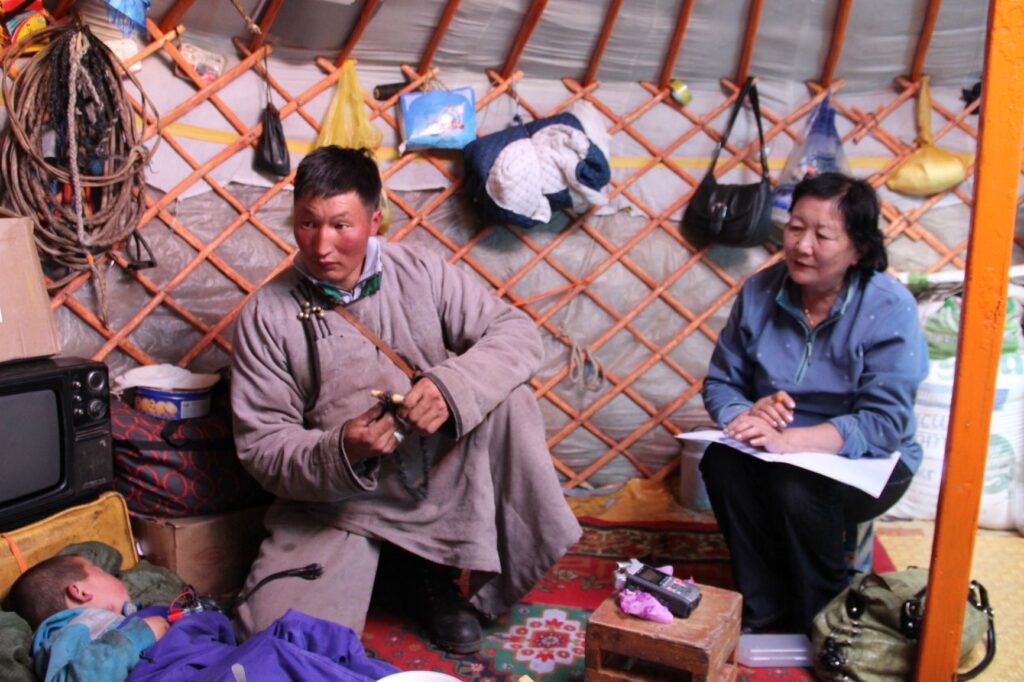 Landing page image for the collection ‘Documenting the Mongol Uriankhai dialect and culture of Mongolia’. Click on the image to access collection.

Uriankhai is an endangered Oirat language spoken in the vast but sparsely populated regions in the Khovd, Bayan-Ulgii and Khuvsgul provinces of Mongolia. Estimates are that only a small minority among the 26,664 Uriankhai still speak the language, which is equal to only 1% of the population of Mongolia. Due to the dominance of the Kazak and Tuvan languages in Bayan-Ulgii province, Khalkha language in Khovd province and Darkhad and Khalkha languages in Khuvsgul province, Uriankhai dialects are disappearing rapidly.

The documentation effort focuses on the language as occurring in a number of different culturally important situation types of nomadic life, also folk songs, poems, eulogy and fairy tales. It thus captures those parts of Uriankhai language and culture that are disappearing most rapidly.

The documentation focuses on speakers of the Uriankhai dialect of Arig Uriankhai in Chandmani soum of Khuvsgul province; and Altai Uriankhai in Duut and Munkh-khairkhan soum of Khovd provinces and Bulgan and Altai soums of Bayan-Ulgii province.

The Uriankhai people first appeared in the 7th century as one of the peoples in Mongolia. In the mid-14th century, they lived in Liaoyang province of modern China. After the rebellion of the northern Uriankhai people, they were conquered by Dayan Khan in 1538 and mostly annexed by the northern Khalkha. A second group of Uriankhai (Uriankhai of the Khentii Mountains) lived in central Mongolia and they started moving to the Altai Mountains in the early 16th century. Some groups migrated to Khövsgöl Province during the course of the Northern Yuan Dynasty (1368-1691).

Today, in Western Mongolia, Uriankhais live in Bulgan, Altai, Altantsogts, Bugat, Buyant, Deluut and Sagsai ‘soums’ (third level administration unit) of Bayan-Ulgii province, Duut and Munkh-khairkhan soums of Khovd province. They are called Altai Uriankhais. Uriankhais who live in Chandmanians Erdenebulgan soums of Khuvsgul province are called Arig Uriankhais. The Uriankhais used to write their language in the Clear Script (“Todobicig”) from the 17th century onwards, which renders Oirat in a quite accurate way. But today only Khalkha Mongolian in Cyrillic letters is used and Todobicig is not written anymore. The Uriankhai dialect is now in danger of disappearing under the dominance of Khalkha dialect, which is the official language and literary language of Mongolia. All mass media, radio, television, local programs are broadcast in Khalkha language and all newspapers, magazines and books are published in Khalkha. Also civil service, economic and social establishments from creche to universities perform their activities in Khalkha language only.

Uriankhai is a one of endangered Oirat language spoken in vast, but sparsely populated regions in Uvs, Khovd and Khuvsgul province of Mongolia. Estimates are that only small minority among the 26664 Uriankhai still speak the language, which is equal to only one percent of population of Mongolia. Due to the dominance of Kazak and Tuvan language in Bayan-Ulgii province, Khalkha language in Khovd province and Darkhad and Khalkha languages in Khuvsgul province Uriankhai of Oirat are disappearing rapidly. The documentation effort will focus on the language as occurring in a number of different culturally important situation types of nomadic life, also folk songs, poem, eulogy and fairy tales and thus capture those parts of Uriankhai language and culture that are disappearing most rapidly.

These records are the result of cultural research conducted by Dr Tsendee Yunger during 2015-2017 on Khuvsgul, Khentai, Khovd, and Bayan-Ulgii province’s Mongolian Uriankhai.

Users of any part of the collection should acknowledge Tsendee Yunger as the principal researcher, field interviewer and data collector. Users should also acknowledge the Endangered Languages Documentation Programme (ELDP) as the funder of the project. Individual speakers whose words and/or images are used should be acknowledged by respective name(s). Any other contributor who has collected, transcribed or translated the data or was involved in any other way should be acknowledged by name. All information on contributors is available in the metadata.