Varieties of Kun-barlang, a language on the edge 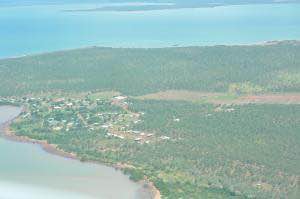 Landing page image for the collection “Varieties of Kun-barlang, a language on the edge”. Click on image to access collection.

Kun-barlang is a highly endangered Gunwinjguan language traditionally spoken in northwestern Arnhem Land, Northern Australia. There are only around 60 remaining speakers. Almost all of the speakers are above the age of 40 and most are very elderly. Kun-barlang speakers now live in various multilingual Indigenous communities in northwestern Arnhem Land (Warruwi, Minjilang, Maningrida and Oenpelli) and in Darwin.

The aim of this collection is to create a community- and research-accessible corpus of Kun-barlang. Audiovisual recordings and documentation of new and existing Kun-barlang materials were made in intergenerational teams with elderly speakers and younger Kun-barlang people.

Kun-barlang people are the custodians of a stretch of land along the Arafura Coast in the Northern Territory (Australia), between tracts of land owned by Mawng and Njébbbana people. Today most Kun-barlang speakers do not live on their traditional country, but in the multilingual communities of Warruwi (Goulburn Island), Minjilang (Croker Island), Oenpelli, and Maningrida. A few speakers also live in Darwin.

Despite the declining number of speakers and that fact that Warruwi is not in traditional Kun-barlang country, community members at Warruwi insist that Kun-barlang is an important language (Singer & Harris under review). In her research on Kun-barlang songs in western Arnhem Land O’Keeffe has found that songmen will also sing in Kun-barlang, even if they do not speak it, and many church songs have been translated into Kun-barlang.

Kun-barlang (ISO639-3:wlg) is a highly endangered Gunwinjguan language with only around 60 remaining speakers. Almost all of the speakers are above the age of 40 and most are very elderly.

Kun-barlang is the only coastal language of the Gunwinyguan family but its position in this family is unclear. It has some similarities to the Central Gunwinjguan languages (such as the Bininj Gun-wok dialect chain) but also some ‘radical differences’ that may be due to the influence of neighbouring non-Gunwinyguan languages, such as Mawng from the Iwaidja family and Njébbana from the Maningrida family (Evans 2003a:32-36). This documentation will provide material to help clarify the provisional classification of the Gunwinyguan language family.

Earlier documentation by Coleman provides information on around nine different Kun-barlang dialects or patri-lects associated with the different Kun-barlang clans and grouped into the two moieties (Duwa and Yirriddja). Her draft dictionary provides some examples of synonym sets for words in these different varieties (Coleman n.d.). Some Kun-barlang speakers still refer to these different varieties, particularly contrasting the Duwa varieties (called ‘soft’ language) with the one Yirriddja variety, Kun-kurduwala, also called Na-djanarr Ka-ngak-bodjung ‘the goanna’s tongue split’ and referred to as ‘hard language’.

Some older basic descriptions of Kun-barlang exist by Capell (1940, 1942) and Kinslow-Harris (Kinslow Harris 1969), however these are not entirely reliable and have been superseded by Coleman’s honours thesis on Kun-barlang (Coleman 1982) and her more recent dictionary work (Coleman n.d.), which O’Keeffe (with Coleman’s permission) converted into a Toolbox database.

There is a wealth of experience and expertise in language work at Warruwi Community. Two particular language workers were key partners in preparing this collection.

Sandra Makurlngu, a Kunwinjku woman (fluent and literate in Kunwinjku, Kun-barlang, Mawng and English with some knowledge of Djambarrpuyngu), is a community language worker at the Mardbalk Arts Centre in the Warruwi community. She has previously worked as a language teacher (for O’Keeffe) and consultant (for O’Keeffe and Singer), recording her own stories and linguistic biography as well as helping to elicit Kun-barlang stories and conversations from elderly Kun-barlang relatives. She has also assisted with transcription and translations of audio and video recordings. Her employment as a community language worker involves working with researchers, and she was able to continue to assist in transcribing, translating and provide advice in all issues to do with data structuring and handling, metadata, and archiving. O’Keeffe and Singer were also able to continue to help her develop her existing skills in using audio and video recording equipment, annotation software (such as ELAN), and in managing the local language and song archive based at the Mardbalk Arts Centre.

Singer has also begun training and mentoring younger members of the Warruwi community in language documentation methods. In 2013 she trained and mentored Year 12 student Janet Mardbinda in the use of audio and video recording equipment and the multimedia annotator ELAN as part of her Year 12 studies. Mardbinda then worked as a language worker on Singer’s multilingualism project at the University of Melbourne. The principal at Warruwi School has invited Singer and O’Keeffe to continue and to expand this training and mentoring. While working on building this collection, Mardbinda continued to develop her skills through this project and help to train others, working alongside senior language consultants in intergenerational teams.
This documentation will provide a rich set of data on Kun-barlang language varieties, some of the least documented or described varieties in western Arnhem Land. Further comprehensive documentation and description of the Kun-barlang language and its varieties will also contribute to ongoing research on the linguistic pre-history of Arnhem Land, the classification of the Gunwinjguan language family and the possible higher-level ‘Proto-Arnhem’, and studies of areal diffusion in Arnhem Land (see Evans 2003b). These findings would have further implications for historical and typological linguistics. A clearer picture of the situation of the Kun-barlang language, which appears to be in decline, will also provide a useful contrast to the situation of the Mawng language, which appears to be surviving well. These case studies at Warruwi and future documentation of Kun-barlang in other communities will contribute to our understanding of linguistic diversity and multilingualism in general, and of the factors that contribute to the maintenance or decline of small languages in multilingual contexts worldwide.

This collection aims to document as many of the remaining registers and varieties of Kun-barlang as possible, focusing on speakers living at Warruwi and in Darwin. The collection includes legacy materials as well as new materials.
When completed, the collection will include

Singer has been working with Warruwi Community since 2002 on the Mawng language initially, and more recently on multilingualism and language use. O’Keeffe has been documenting Kun-barlang, Mawng and Kuwninjku songs at Warruwi (and Minjilang, Oenpelli and Maningrida) since 2006 and has assisted Singer on previous projects Warruwi is an intensely multilingual community and there is a high-level of community interest in maintaining not only individual languages, but also the entire multilingual linguistic landscape. Community members are aware of the work that has been done on documenting other languages in the area, such as Mawng, Iwaidja and Kunwinjku, and they are keen for the same level of documentation for Kun-barlang. A number of people have asked Singer and O’Keeffe to work on documenting Kun-barlang – something that has not been within the focus of their other research (on the Mawng language, multilingualism and songs).

The new materials in this collection were gathered between 2014 and 2015 during the research for the ELDP Small Grant held by Ruth Singer. The outcomes of this research project helped the research team to determine the feasibility and possible scope of a full documentation project of all the varieties of Kun-barlang across different communities and ages.
This collection also contains a range of legacy materials, including

This collection here represents a pilot project in which Singer and O’Keeffe attempted to determine the extent to which community members under the age of 40 can speak or understand Kun-barlang. They found that a larger project was indeed feasible, and Isabel O’Keeffe’ collection “Comprehensive pan-varietal, ethnobiological, anthropological record of Kun-barlang” is the outcome of this follow-up project (see http://hdl.handle.net/2196/00-0000-0000-000F-BF4E-0). The materails in this collection were also archived at the local computer archive at the Mardbalk Arts Centre at Warruwi.